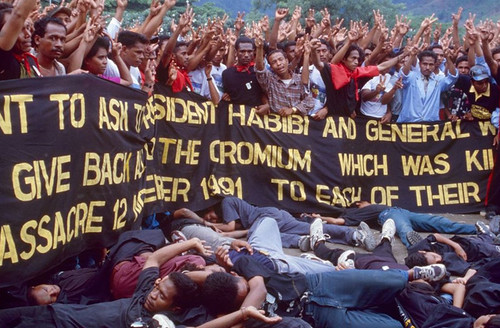 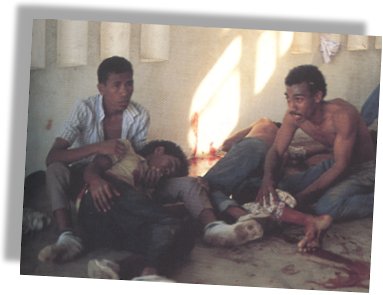 Indonesian armed forces open fire on a crowd of student protesters in Dili, East Timor in what become known as the Santa Cruz massacre.

On November 12, 1991, over 270 East Timorese were massacred at the Santa Cruz cemetery in Dili, East Timor, by Indonesian troops. The civilians were participating in a memorial precession honoring the death of Sebastio Gomez, a young man slain by the Indonesian military.

The Indonesian troops participating in the massacre were backed by US support. The M-16 rifles used at Santa Cruz were provided by the US and the Indonesian military who led the attack were trained by the US. However, when the United States and the rest of the international community received news of the massacre at Santa Cruz the US and its allies doubled their military aid to Indonesia.

The massacre at Santa Cruz in 1991 sparked grassroots activists in the US to begin pushing Congress to cut off military training and support for Indonesia. Eventually the US Congress suspended defense training and military aid to Indonesia, however, many more Timorese were killed before this occurred.