Darlington Raceway is the site of the inaugural Southern 500, the first 500-mile NASCAR race.

Alaska Airlines Flight 1866 crashes near Juneau, Alaska, killing all 111 people on board.

Coup of 18 Fructidor in France.

The Coup of 18 Fructidor, Year V, was a seizure of power by members of the French Directory on 4 September 1797 when their opponents, the Royalists, were gaining strength. Howard G. Brown, Professor of History at Binghamton University, stresses the turn toward dictatorship and the failure of liberal democracy under the Directory, blaming it on “chronic violence, ambivalent forms of justice, and repeated recourse to heavy-handed repression.

Three Directors, Paul Barras, Jean-François Rewbell and Louis Marie de La Révellière-Lépeaux, staged the coup d’état with support from the military.[2] Royalist candidates had gained the great majority of seats in the recent elections, where a third of the seats were at stake. They were poised to win the next round of elections and assume control of the Directory.

Jean-Charles Pichegru, a figure widely assumed to be acting in sympathy to the monarchy and its restoration, was elected President of the Council of Five Hundred. After documentation of Pichegru’s treasonous activities was supplied by Napoleon Bonaparte, the Directors accused the entire body of plotting against the Revolution and moved quickly to annul the elections and arrest the royalists.

To support the coup, General Lazare Hoche, then commander of the Army of Sambre-et-Meuse, arrived in the capital with his troops, while Bonaparte sent troops under Pierre Augereau. Deputies were arrested and 53 were exiled to Cayenne in French Guiana. Since death from tropical disease was likely, it was referred to as the “dry guillotine”. The 42 opposition newspapers were closed. The chambers were purged, and elections were partly cancelled.

Among those deported to Cayenne were Pichegru, François Barbé-Marbois, François-Marie, marquis de Barthélemy and Amédée Willot. Lazare Carnot made good his escape. The two vacant places in the Directory were filled by Philippe Merlin de Douai and Nicolas-Louis François de Neufchâteau. The government then returned to Jacobin methods. The law against the relatives of émigrés was reenacted, and military tribunals were established to condemn émigrés who should return to France.

The nonjuring priests were again persecuted. Many hundreds were either sent to Cayenne or imprisoned in the hulks of Ré and Oléron. La Révellière-Lépeaux seized the opportunity to propagate his religion. Many churches were turned into Theophilanthropic temples. The government strained its power to secure the recognition of the décadi as the day of public worship and the non-observance of Sunday. Freedom of the press ceased, newspapers were confiscated and journalists were deported in large numbers. It was proposed to banish from France all members of the old noblesse, and though the proposal was dropped, they were all declared to be foreigners and were forced to obtain naturalisation in order to enjoy the rights of other citizens. A formal bankruptcy of the state, resulting in the cancelling of two-thirds of the interest on the public debt, crowned the misgovernment of this disastrous time.

Salvador Allende is elected as the President of Chile. 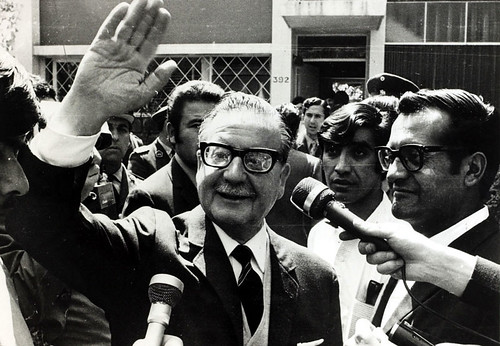 Salvador Allende ran for the presidency for the first time in 1952 but was temporarily expelled from the Socialist Party for accepting the support of the outlawed Communists; he placed last in a four-man race. He ran again in 1958—with Socialist backing, as well as the support of the then-legal Communists—and was a close second to the Conservative-Liberal candidate, Jorge Alessandri. Again with the same support he was decisively defeated (1964) by the Christian Democrat Eduardo Frei. For his successful 1970 campaign Allende ran as the candidate of Popular Unity, a bloc of Socialists, Communists, Radicals, and some dissident Christian Democrats, leading in a three-sided race with 36.3 percent of the vote. Because he lacked a popular majority, however, his election had to be confirmed by Congress, in which there was strong opposition from the right. Nevertheless, it was confirmed on October 24, 1970, after he had guaranteed support to 10 libertarian constitutional amendments demanded by the Christian Democrats.

Inaugurated on November 3, 1970, Allende began to restructure Chilean society along socialist lines while retaining the democratic form of government and respecting civil liberties and the due process of law. He expropriated the U.S.-owned copper companies in Chile without compensation, an act which set him seriously at odds with the U.S. government and weakened foreign investors’ confidence in his government. His government also took steps to purchase several important privately owned mining and manufacturing sectors and to take over large agricultural estates for use by peasant cooperatives. In an attempt to redistribute incomes, he authorized large wage increases and froze prices. Allende also printed large amounts of unsupported currency to erase the fiscal deficit created by the government’s purchase of basic industries. By 1972 Chile was suffering from stagnant production, decreased exports and private-sector investment, exhausted financial reserves, widespread strikes, rising inflation, food shortages, and domestic unrest. International lines of credit from the United States and western Europe had completely dried up. Allende’s inability to control his own radical left-wing supporters further incurred the hostility of the middle class. In foreign affairs, he established relations with China and Cuba.

Mark Spitz becomes the first athlete to win seven medals at the one Olympic Games.

George Eastman registers the name ‘Kodak’ and receives a patent for his camera that uses a roll of film.

Alaska Airlines Flight 1866 crashes near Juneau, Alaska All 111 people on board are killed.