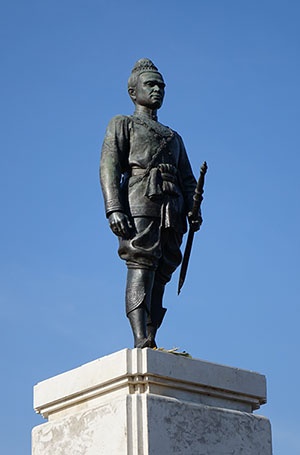 Little is known of Ramathibodi’s early career, but he is thought to have been related to the ruling family of the principality of Lop Buri and to have married the daughter of the ruler of U Thong in central Siam. He succeeded to the throne of U Thong in about 1347 and moved his capital 50 miles east to an island in the Chao Phraya River, where he founded the city of Dvaravati Sri Ayudhya, more commonly known as Ayutthaya, which remained the capital of Siam for more than 400 years. On March 4, 1351, Ramathibodi became king of an extensive state in the Chao Phraya valley based on Ayutthaya, Lop Buri, and Suphan Buri and quickly established Siam as a power in the affairs of the region. Maintaining amicable relations with the Thai kingdom of Sukhothai to the north, he devoted his energies to securing the region’s independence of the Cambodian kingdom of Angkor, against which he waged numerous campaigns. From the beginning of his reign he encouraged Persian and Chinese traders, and Ayutthaya’s subsequent power and prosperity rested in part on its development as an international port.

One of Ramathibodi’s most lasting achievements was to lay the foundations of the Siamese legal system, which was not changed significantly until the reign of Chulalongkorn in the 19th century. In 1350–59 he composed a legal text, which was a codification of the traditional law of the Tai state of Nanchao that had ruled in Southwest China from the 7th to the 13th century AD, before the Tai people migrated south to their present homeland.

Ramathibodi prepared his son Ramesuan to succeed him, but on his death in 1369 the throne was seized by his Suphan Buri brother-in-law, Borommaraja I, who reigned for nine years before Ramesuan could regain the throne and restore Ramathibodi’s dynasty. 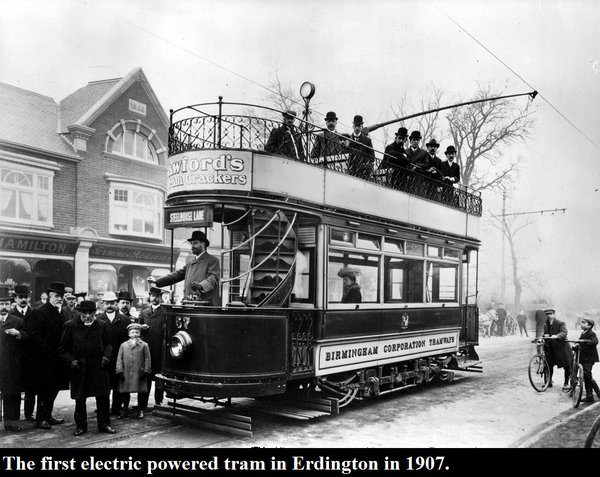 The first generation of trams in London started in 1860 when a horse tramway began operating along Victoria Street in Westminster. This first line was operated by a somewhat eccentric American, George Francis Train. Initially, there was strong opposition as, although it was popular with its passengers, the first designs had rails that stood proud of the road surface and created an obstruction for other traffic. This came to a head in 1861 when Train was arrested for “breaking and injuring” the Uxbridge Road and his plans were put on hold. Eventually Parliament passed legislation permitting tram services, on the condition that the rails were recessed into the carriageway and that the tramways were shared with other road users. Costs of maintenance of the tramway and its immediately neighbouring road carriageway would be borne by the tram companies, thus benefiting the ratepayers, who had been bearing the full cost of highway repairs since the abolition of turnpikes. Fares were set at 1d per mile, with half-price early and late workmen’s services. After a demonstration line was built at the Crystal Palace, the first lines authorised by the Act of Parliament in 1870 ran from:

The new tram companies all adopted the same standard gauge, with the intention of being able to link up services at later dates. Horse tram lines soon opened all over London, typically using two horses to pull a 60-person car. They proved popular as they were cheaper, smoother, roomier and safer than the competing Omnibus or Hackney carriages. Replacement by electric vehicles commenced in 1901; the last horse-drawn trams were withdrawn in 1915.

Powered trams
There were several early attempts to run motor-powered trams on the London tramlines: John Grantham first trialled an experimental 23 foot steam tramcar in London in 1873 but withdrew it after it performed poorly. From 1885, the North London Tramways Company operated 25 Merryweather and Dick, Kerr steam engines hauling long-wheelbase Falcon Engine & Car Works trailers, until its liquidation in 1891. Although several towns and cities adopted steam trams, the problems associated with track weight, acceleration, noise and power held back their general acceptance in London.

Between 1881 and 1883. a small number of trams powered by compressed air were trialled on the Caledonian Road tramway.

In 1884, a cable tram was introduced for Highgate Hill, the first cable tramway in Europe, which was followed by a second cable line to draw trams up Brixton Hill to Streatham. Both these systems were replaced within 15 years by electric trams.

The electric tram took some decades to establish itself in London. Soon after the storage battery was invented, an electric tram was tested on the West Metropolitan Tramways line between Acton and Kew in 1883 but it was not until 1901 that Croydon Corporation introduced the first fully operational electric tram services in the Greater London area, using power delivered from overhead wires. Meanwhile, Imperial Tramways, under the directorship of James Clifton Robinson, had acquired the worn-out tram network in West London, which it renovated and extended from Shepherds Bush to Acton, Ealing, Chiswick and Uxbridge, as the London United Tramways Company, using overhead electrification throughout and its own network of ornate power stations, starting with Chiswick.

Underground Trams
There were plans to run an underground tram line between South Kensington and the Albert Hall but it was withdrawn in 1891 and a pedestrian only route, the South Kensington subway, was built instead. The Kingsway tramway subway did go ahead – this started in 1902 going from Theobalds Road to the Victoria Embankment. In the 1930s, the arched tunnels were removed to accommodate double decker trams. The last tram using the subway system was 5 April 1952.

First electric trams
The first electric tram on Kingston Bridge, 1906
After the slow start, electric trams rapidly became very popular; by 1903, there were 300 electric tramcars in London, which carried 800,000 passengers over Whitsun weekend in 1903. The London County Council Tramways first electric line opened in May 1903 between Westminster Bridge and Tooting and the LCC sold 3.3 million tickets in its third year of business or five times the traffic carried by its horse trams. The LCC saw the electric trams as a way of driving social change, as its cheap, fast service could encourage workers to move out of the crowded inner city and live healthier lives in the suburbs. Although the City of London and the West End of London never gave permission for tram lines to be built, soon other London boroughs introduced their own electric services, including West Ham, Leyton, Dartford and Bexley.

By 1914, the London tram operators formed the largest tram network in Europe but the onset of the Great War saw a halt in the expansion of the trams and thousands of staff left to join the armed forces to be replaced by “substitute” women conductors and drivers.

During their heyday, tram services covered much of inner London and reached out to the suburbs, assisted by facilities like the Kingsway tramway subway, which enabled the longest tram route entirely within the County of London to operate: a weekend service between Archway, then part of Highgate, and Downham via Brockley, 16 miles.

Route coverage might have been wider still but the terms of the 1870 Act meant that the passage of new tramways had to be negotiated individually with local authorities, who would sometimes impose prohibitively expensive improvement works as a condition of approval.

After the Great War, money for investment and maintenance became harder to find, as passengers migrated to the new motor bus services. In the 1930s, The London United and Metropolitan Electric companies purchased a large fleet of modern double-deck Feltham trams, built by the Union Construction Company at Feltham. LUT accompanied this change by introducing electric trolleybuses using twin overhead wires as a cheaper alternative for 17 miles of its routes in 1931.

A Royal Commission on Transport, held between 1928 and 1931, ensured that the tram companies retained complete responsibility for the maintenance of its rails and highway, which was shared with other road users who contributed its wear. But this was accompanied by Parliamentary bills in 1930 and 1933 that set up the London Passenger Transport Board to operate the LCC’s existing bus and underground train service and to purchase and manage all of London’s tramways. Under the LPTB, there was no new investment in tram services and the maintenance of services became a hot political issue in elections in South London, an area poorly served by Underground trains. The merged tram services were held back from introducing new, quieter and more comfortable track and vehicles, in favour of trolleybus services and tubes provided under the New Works Programme. Although the trams returned gross annual revenues of £850,000, the net surplus was £128,000 , after costs were taken by the LCC, partly to repay the debt of £18m resulting from the merger.

The French ship La Coubre explodes in Havana, Cuba. Over 100 are killed. 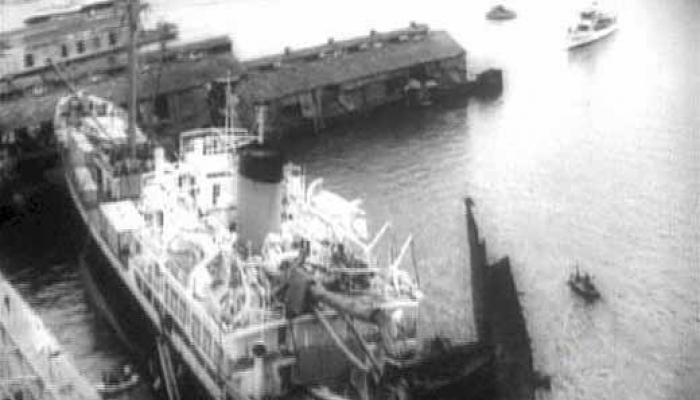 The French freighter La Coubre exploded in the harbor of Havana, Cuba, on 4 March 1960 while it was unloading 76 tons of munitions. Casualties may have been as high as 100, and many more were injured. Fidel Castro charged it was an act of sabotage on the part of the United States, which denied any involvement.

Unloading explosive ordnance directly onto the dock in Havana was against port regulations. Ships with such cargoes were supposed to be moored in the center of the harbor and their high-risk cargo unloaded onto lighters.[1] La Coubre, a 4,310-ton French vessel, was unloading her cargo of 76 tons of Belgian munitions she had transported from Antwerp to Havana when she exploded at 3:10 pm on 4 March 1960. Thirty minutes after the first explosion, while hundreds of people were involved in a rescue operation organized by the Cuban military, a second, more powerful explosion resulted in additional fatalities and injuries.

At the time of the explosion, Che Guevara was in a meeting at the National Institute of Agrarian Reform headquarters. He drove to the scene and spent the next few hours giving medical attention to the crew members, armed forces personnel, and dock workers who had been injured. The death toll was between 75 and 100; more than 200 people injured.

The Real IRA explode a car bomb in front of the BBC Television Centre in London.

Frederick I Barbarossa is crowned as the King of the Germans.

During the First Balkan War, the Greek army engages the Turks at Bizani, which results in victory two days later.