Slavery is abolished in the State of New York.

NASA’s Pathfinder space probe lands on the surface of Mars.

In Alabama, the Tuskegee Institute opens.

The USA celebrates its Bicentennial.

The United States Bicentennial was a series of celebrations and observances during the mid-1970s that paid tribute to historical events leading up to the creation of the United States of America as an independent republic. It was a central event in the memory of the American Revolution. The Bicentennial culminated on Sunday, July 4, 1976, with the 200th anniversary of the adoption of the Declaration of Independence.

he nation had always commemorated the Founding, as a gesture of patriotism and sometimes as an argument in political battles. Historian Jonathan Crider points out that in the 1850s, editors and orators both North and South claimed their region was the true custodian of the legacy of 1776, as they used the Revolution symbolically in their rhetoric.

The plans for the Bicentennial began when Congress created the American Revolution Bicentennial Commission on July 4, 1966. Initially, the Bicentennial celebration was planned as a single city exposition that would be staged in either Philadelphia or Boston. After 6½ years of tumultuous debate, the Commission recommended that there should not be a single event, and Congress dissolved it on December 11, 1973, and created the American Revolution Bicentennial Administration, which was charged with encouraging and coordinating locally sponsored events. David Ryan, a professor at University College Cork, notes that the Bicentennial was celebrated only a year after the humiliating withdrawal from Vietnam in 1975 and that the Ford administration stressed the themes of renewal and rebirth based on a restoration of traditional values, giving a nostalgic and exclusive reading of the American past.
On December 31, 1975, the eve of the Bicentennial Year, President Gerald Ford recorded a statement to address the American people by means of radio and television broadcasts. Presidential Proclamation 4411 was signed as an affirmation to the Founding Fathers of the United States principles of dignity, equality, government by representation, and liberty.

Saladin defeats Guy of Lusignan, King of Jerusalem in the Battle of Hattin. 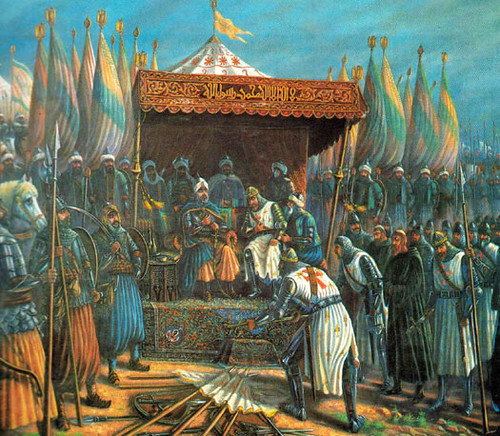 The battle in northern Palestine marked the defeat and annihilation of the Christian Crusader armies of Guy de Lusignan, king of Jerusalem, by the Muslim forces of Saladin. It paved the way for the Muslim reconquest of the city of Jerusalem and of the greater part of the three Crusader states—the county of Tripoli, the principality of Antioch, and the kingdom of Jerusalem—thus nullifying the achievements made in the Holy Land by the leaders of the first Crusades and alerting Europe to the need for a third Crusade.

In July 1187 the Crusaders were camped at Sepphoris, about 20 miles west of the Sea of Galilee, when word reached them that Saladin had attacked the city of Tiberias along the lake. The Crusader forces included several hundred Templars and Hospitallers, militant monastic orders that Saladin ranked among the Christian armies’ most-effective fighters. On July 3 about 20,000 Crusaders abandoned their camp to go to the relief of the besieged city. Their route took them through a hot, arid plain where, halfway to Tiberias, they ran out of water while under continual harassment from Saladin’s cavalry. The Crusaders’ condition worsened after a night spent without water, but the next morning they resumed their march, heading toward a range of hills above the village of ?a???n.

Confronted by Saladin’s army, the Crusaders, who were no longer able to fight effectively, left the road and were driven back against the two largest hills, the Horns of ?a???n, by the Muslims. Although mounted elements of the Crusader army made repeated charges against the Muslim lines, they were unable to effect any significant breakthrough. The 30,000-man Muslim army slaughtered many of the Crusaders on the field and captured a shard of the True Cross, a Christian relic that had been carried into the battle by the bishop of Acre. Saladin spared the lives of King Guy and most of the Christian lords, but he personally slew Reginald of Châtillon as an oath breaker for his role in shattering the truce that had been in place between Saladin and the Crusader states. Saladin also ordered the execution of virtually all captured Templars and Hospitallers; only Templar Grand Master Gerard de Ridefort avoided the blade. On the day after the battle, Saladin launched his campaign to retake the city of Jerusalem.

Particles consistent with the Higgs boson are announced as being discovered at the Large Hadron Collider at CERN.

The United States Declaration of Independence is adopted by Congress.