Gunmen set off three bombs at the central mosque in the northern Nigerian city of Kano killing at least 120 people.

Independence of Panama from Spain was accomplished through a bloodless revolt between 10 November 1821 and 28 November 1821. Seizing the opportunity, when the Spanish governor left Panama to march on rebellious Ecuadorians, José de Fábrega led a push for independence. Rebels in the small town of Villa de Los Santos made the first declaration for independence and the movement quickly spread to the capital. Fearing that Spain would retake the country, the rebels quickly joined the Republic of Gran Colombia.

Initial attempts to free Panama from Spain came from South American liberators, not Panamanians, who saw Panama as a strategic link, both politically and militarily between South America and the Central American states. As early as 1787, Venezuelan Francisco de Miranda attempted to interest the British in a canal project in Panama to increase trade for Britain, in exchange for military support to bolster South American independence hopes. The attack by Napoleon, who deposed the Spanish monarch in 1807, led to the push for independence throughout South America by Simón Bolivar. Though Bolivar did not set foot in Panama, he advocated for independence, declaring in his 1815 “Letter from Jamaica” that the independence of Panama would lead to commerce opportunities. In 1819 the Scotsman Gregor MacGregor led a failed attempt to free Panama.

When South American revolutionary zeal deposed Viceroyalty of New Granada Juan de la Cruz Mourgeón, he fled to Panama and was declared governor. Mourgeón was ordered to Ecuador to fight the separatists and appointed José de Fábrega as his successor. As soon as Mourgeón sailed, Fábrega seized the moment for Panama’s independence.

On 10 November 1821, the first call for independence was made in the small provincial town of Villa de los Santos. Called the “Primer Grito de Independencia de la Villa de Los Santos, it ignited rebels throughout the Panamanian countryside. Using bribes to quell resistance from the Spanish troops and garner their desertion, the rebels gained control of Panama City without bloodshed. On November 20, 1821, Fábrega proclaimed Panamanian independence in Panama City. An open meeting was held with merchants, landowners, and elites, who fearing retaliation from Spain and interruption of trade decided to join the Republic of Gran Colombia and drafted the Independence Act of Panama.

A fire in the Cocoanut Grove in Boston nightclub kills 492 people. 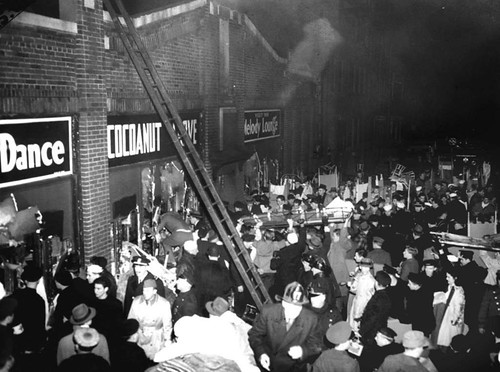 The Cocoanut Grove Fire was a nightclub fire in the United States. The Cocoanut Grove was a premier nightclub during the post-Prohibition 1930s and 1940s in Boston, Massachusetts. On November 28, 1942, it was the scene of the deadliest nightclub fire in history, killing 492 people and injuring hundreds more. The scale of the tragedy shocked the nation and briefly replaced the events of World War II in newspaper headlines. It led to a reform of safety standards and codes across the US, and to major changes in the treatment and rehabilitation of burn victims internationally.

It was the second-deadliest single-building fire in American history; only the 1903 Iroquois Theatre fire in Chicago had a higher death toll, of 602. It was only two years after the Rhythm Club fire which had killed 209.

Official reports state that the fire started at about 10:15 pm in the dark, intimate Melody Lounge downstairs. Goody Goodelle, a young pianist and singer, was performing on a revolving stage, surrounded by artificial palm trees. The lounge was lit by low-powered light bulbs in coconut-styled sconces beneath the fronds. A young man, possibly a soldier, had unscrewed a light bulb in order to give himself privacy while kissing his date. Stanley Tomaszewski—a 16-year-old busboy—was instructed to put the light back on by tightening the bulb. He stepped up onto a chair to reach the light in the darkened corner. Unable to see the bulb, he lit a match to illuminate the area, tightened the bulb, and extinguished the match. Witnesses first saw flames in the fronds, which were just below the ceiling, immediately afterward. Though the lit match had been close to the same fronds where the fire was seen to have begun, the official report determined that Tomaszewski’s actions could not be found to be the source of the fire, which “will be entered into the records of this department as being of unknown origin.”

Albania declares its independence from the Ottoman Empire.

On November 28, 1912 Albanian nationalist leader Ismail Qemal, an Ottoman civil servant who rose to the position of President of the Ottoman National Assembly in Istanbul in 1909, returned to Albania with Austro-Hungarian support and at the head of a swiftly convened national assembly declared Albanian independence in the town of Vlora. The chairman, Ismail Kemal Bey, stated that although they had always been faithful to the Ottoman Empire, the Albanians had never forgotten their own language and nationality. The declaration, in Albanian and Turkish read:

“In Vlora, on the 15th/28th of November. Following the speech made by the President, Ismail Kemal Bey, in which he spoke of the great perils facing Albania today, the delegates have all decided unanimously that Albania, as of today, should be on her own, free and independent.”

This signaled the end of almost 500 years of Ottoman rule in Albania. The leaders raised the flag on the balcony of the two-story building in Vlora where the Declaration of Independence had just been signed.

A fire in the Cocoanut Grove nightclub in Boston, Massachusetts kills 492 people.

The Treaty of Hopewell is signed.

The Treaty of Hopewell is signed.

In the Battle of Cane Hill, General John Marmaduke’s Confederates are defeated by Union troops under General James G. Blunt.

The Irish Republican Army ambush a convoy of British Auxiliaries and kill seventeen of them.