Mercedes-Benz is formed by Gottlieb Daimler and Karl Benz merging their two companies.

Fighters of the First Crusade defeat Kerbogha of Mosul.

Antoine-Joseph “Adolphe” Sax 6 November 1814 – 7 February 1894 was a Belgian inventor and musician who invented the saxophone in the early 1840s patented in 28 June 1846. He played the flute and clarinet. He also invented the saxotromba, saxhorn and saxtuba.

Antoine-Joseph Sax was born on 6 November 1814, in Dinant, in what is now Belgium, to Charles-Joseph Sax and his wife. While his given name was Antoine-Joseph, he was referred to as Adolphe from childhood. His father and mother were instrument designers themselves, who made several changes to the design of the French horn. Adolphe began to make his own instruments at an early age, entering two of his flutes and a clarinet into a competition at the age of 15. He subsequently studied performance on those two instruments as well as voice at the Royal Conservatory of Brussels.

Adolphe Sax get a patent for the saxophone. 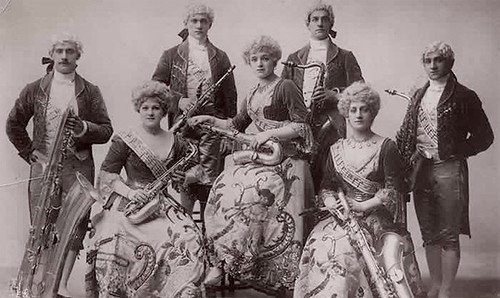 Although the saxophone quickly became popular with French army bands, the Belgian-born Sax spent decades in court trying to fend off knockoffs and made only meager profits before his patents expired in 1866. Myriad modifications followed, improving ease of play.U.S. production began in 1888 when Charles Gerard Conn of Elkhart, Indiana, started manufacturing the instruments for military bands. By the early 1900s, the saxophone had become a comedy fixture on the vaudeville circuit, where musicians used the instrument to mimic chicken sounds.

Produced eventually in baritone, tenor, alto and soprano models, the saxophone became a creative tool of the first magnitude only in the early 1920s, when New Orleans clarinet player Sidney Bechet grew weary of being drowned out by his bandmate’s much-louder cornet. When the jazz musician switched to soprano saxophone and began projecting a stronger “voice” within the ensemble, other players took note.

The Treaty of Versailles is signed in Paris. This ens the fighting between Germany and the Allies of World War I.

The Stonewall Riots begin in New York City launching the start of the Gay Rights Movement.