Marie and Pierre Curie announce the isolation of radium.

The Battle of Chickasaw Bayou during the American Civil War begins. 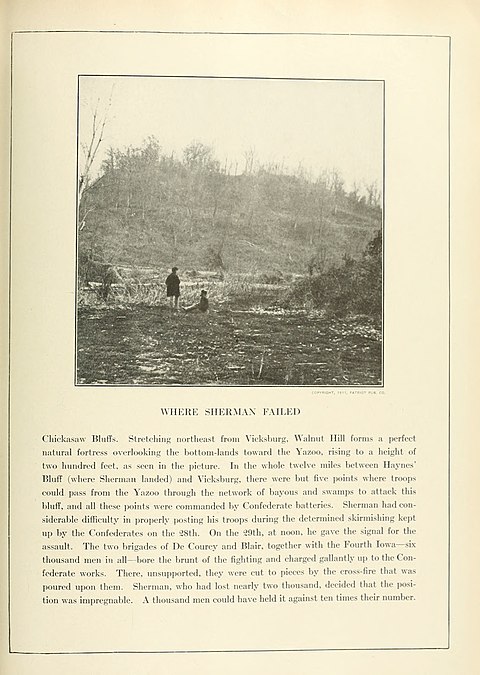 The Battle of Chickasaw Bayou, also called the Battle of Walnut Hills, fought December 26–29, 1862, was the opening engagement of the Vicksburg Campaign during the American Civil War. Confederate forces under Lt. Gen. John C. Pemberton repulsed an advance by Union Maj. Gen. William T. Sherman that was intended to lead to the capture of Vicksburg, Mississippi.

On December 26, three Union divisions under Sherman disembarked at Johnson’s Plantation on the Yazoo River to approach the Vicksburg defenses from the northeast while a fourth landed farther upstream on December 27. On December 27, the Federals pushed their lines forward through the swamps toward the Walnut Hills, which were strongly defended. On December 28, several futile attempts were made to get around these defenses. On December 29, Sherman ordered a frontal assault, which was repulsed with heavy casualties, and then withdrew. This Confederate victory frustrated Maj. Gen. Ulysses S. Grant’s attempts to take Vicksburg by a direct approach.

Starting in November 1862, Maj. Gen. Ulysses S. Grant, commanding Union forces in Mississippi, undertook a campaign to capture the city of Vicksburg, high on the bluffs of the Mississippi River, one of two Confederate strong points that denied the Union complete control of the Mississippi River. Grant split his 70,000-man army into two wings—one commanded by himself and one commanded by Maj. Gen. William T. Sherman. Sherman commanded the Right Wing, or XIII Corps, Army of the Tennessee, redesignated the XV Corps on December 22. His expeditionary force of 32,000 troops was organized into four divisions, commanded by Brig. Gens. Andrew J. Smith, Morgan L. Smith, George W. Morgan, and Frederick Steele.

Grant’s wing marched south down the Mississippi Central Railroad, making a forward base at Holly Springs. He planned a two-pronged assault in the direction of Vicksburg. As Sherman advanced down the river, Grant would continue with the remaining forces down the railroad line to Oxford, where he would wait for developments, hoping to lure the Confederate army out of the city to attack him in the vicinity of Grenada, Mississippi.

The seven gunboats and fifty-nine troop transports commanded by Rear Adm. David D. Porter departed Memphis, Tennessee, on December 20, stopped at Helena, Arkansas, to pick up additional troops, and arrived at Milliken’s Bend above Vicksburg on December 24. After advancing up the Yazoo River, the transports disembarked Sherman’s men at Johnson’s Plantation, opposite Steele’s Bayou, north of the city.

The Confederate forces opposing Sherman’s advance were from the Department of Mississippi and East Louisiana, commanded by Lt. Gen. John C. Pemberton, a Pennsylvanian who chose to fight for the South. The officer in direct command of the defenses of Vicksburg was Maj. Gen. Martin L. Smith, who commanded four brigades led by Brig. Gens. Seth M. Barton, John C. Vaughn, John Gregg, and Edward D. Tracy. Brig. Gen. Stephen D. Lee commanded a provisional division with brigades commanded by Cols. William T. Withers and Allen Thomas; Lee was the primary commander of the Confederate defense in the Walnut Hills until the arrival late on December 29 of Maj. Gen. Carter L. Stevenson. Although the Union forces outnumbered the men to their front by two to one, they faced a formidable maze of both natural and man-made defenses. First was a thick entanglement of trees, which was broken intermittently by swampland. Chickasaw Bayou, a stream that was chest-deep, 50 yards wide, and choked with trees, also acted as a potential barrier to Sherman’s men because it was parallel to the planned line of advance and could interrupt communication between units. Furthermore, the Confederates had formed dense barriers using felled trees for abatis.

On December 26, Sherman deployed the brigades of Col. John F. DeCourcy and Brig. Gens. David Stuart and Francis P. Blair, Jr., to perform reconnaissance and find weaknesses in a Confederate defense. They moved slowly ahead through the difficult terrain, skirmishing with S.D. Lee’s covering force that had been at Mrs. Lake’s plantation. On December 28, Steele’s division attempted to turn the Confederate right flank, but was repulsed by Confederate artillery fire as they advanced on a narrow front.

On the morning of December 29, Sherman ordered an artillery bombardment of the Confederate defenses to weaken them before a general Federal advance. For almost four hours, an artillery duel took place all along the line of battle, but did little damage. At 11 a.m., the duel ceased, and the infantry deployed into their lines of battle. Understanding the formidable nature of the Confederate fortifications, Sherman remarked, “We will lose 5,000 men before we take Vicksburg, and may as well lose them here as anywhere else.”

At noon, Union troops advanced with a cheer. Blair’s brigade moved on the left, DeCourcy’s in the center, followed by Brig. Gen. John M. Thayer’s brigade on the right; Thayer’s brigade lost its way and only one regiment, the 4th Iowa Infantry, was engaged. Colonel James A. Williamson, commanding the 4th Iowa, was later awarded the Medal of Honor for his actions that day. They crossed water barriers and abatis and carried the advance rifle pits on the weight of sheer numbers, but met stiff resistance when they came against the main Confederate line and began to crumble under the heavy fire. The survivors fell back across the bayou on a corduroy bridge. S.D. Lee ordered his men to make a counterattack, during which they captured 332 Federals and four battle flags.

Another assault ordered by Sherman was conducted by two divisions under A.J. Smith advancing across Chickasaw Bayou to seize the Indian Mound that was in the center of the Confederate line, defended by Barton and Gregg. Skirmishers from the brigades of Cols. Giles A. Smith and Thomas Kilby Smith covered the bayou crossing and the 6th Missouri Infantry of G. A. Smith’s brigade led the way with 20 pioneers, building a road on the far bank. Five attempts to carry the position at the Indian mound were repulsed.

On the far Union right, an attack by Col. William J. Landram’s brigade of A.J. Smith’s division was easily repulsed by the Confederates of Vaughn’s brigade. 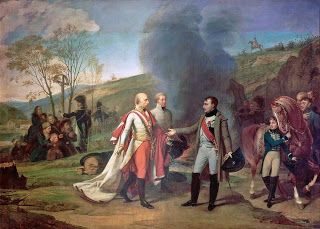 The fourth Peace of Pressburg  was signed on 26 December 1805 between Napoleon and Holy Roman Emperor Francis II as a consequence of the French victories over the Austrians at Ulm  and Austerlitz. A truce was agreed on 4 December, and negotiations for the treaty began. The treaty was signed in Pressburg, at that time in Hungary, by Johann I Josef, Prince of Liechtenstein, and the Hungarian Count Ignaz Gyulai for Austria and Charles Maurice de Talleyrand for France.

Beyond the clauses establishing “peace and amity” and the Austrian withdrawal from the Third Coalition, the treaty also mandated substantial European territorial concessions from Austria. The gains of the previous treaties of Campo Formio and Lunéville were reiterated and Austrian holdings in Italy and Bavaria were ceded to France. Certain Austrian holdings in Germany were passed to French allies: the King of Bavaria, the King of Württemberg, and the Elector of Baden. Austrian claims on those German states were renounced without exception. The most notable territorial exchanges concerned the Tyrol and Vorarlberg, which went to Bavaria, and Venetia, Istria, and Dalmatia, which were incorporated into the Kingdom of Italy, of which Napoleon had become king earlier that year. Augsburg, previously an independent Free Imperial City, was ceded to Bavaria. As a minor compensation, Austria received the Electorate of Salzburg.

The Primate’s Palace, where the Peace of Pressburg was signed
Emperor Francis II also recognized the kingly titles assumed by the Electors of Bavaria and Württemberg, which foreshadowed the end of the Holy Roman Empire. Within months of the signing of the treaty and after a new entity, the Confederation of the Rhine, had been created by Napoleon, Francis II renounced his title as Holy Roman Emperor and became Emperor Francis I of Austria. An indemnity of 40 million francs to France was also provided for in the treaty. 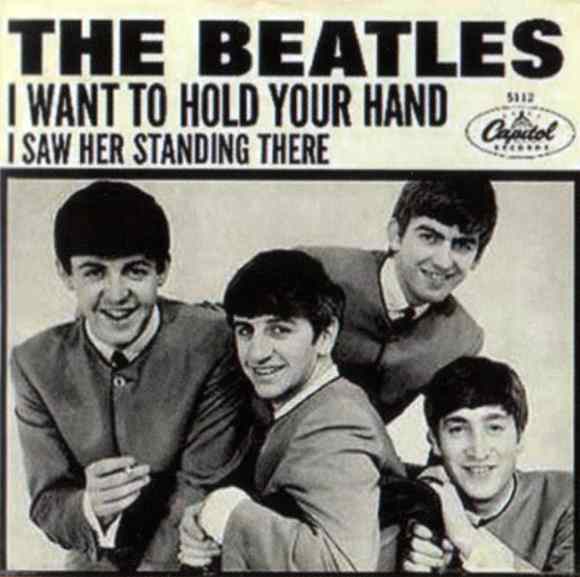 The Beatles’ “I Want to Hold Your Hand” is released in the USA.

This was the first Beatles song to catch on in America. In 1963, the Beatles became stars in England, but couldn’t break through in the US. They couldn’t get a major label to distribute their singles in America, so songs like “Love Me Do” and “She Loves You” were issued on small labels and flopped, even though they were hits in England. By February 1964, America finally took notice of The Beatles and bought this single in droves, giving them their first US hit. It sold better in the first 10 days of release in the US than any other British single, and remains the best-selling Beatles single in the United States, moving over 12 million copies.

The Beatles celebrated madly when they found out they were #1 in America. They came to America for the first time in February 1964, a week after this hit #1, and having the top single gave them a huge boost. Conquering the US was, and still is, a big deal for British bands. Many groups that are huge in the UK (Oasis, Blur) never really catch on in America.In the first three days after its release, 250,000 copies had been sold; 10,000 were reportedly sold every hour in New York City.

Marie and Pierre Curie announce their discovery and isolation of radium.

The coronation of King Stephen of England takes place.

Marie and Pierre Curie announce they have isolated of radium.

JonBenét Ramsey, the 6 year old beauty queen is found dead in the basement of her family’s home in Colorado.

During the Vietnam War, as part of Operation Linebacker II, 120 American B-52 Stratofortress bombers attack Hanoi.