On this day in 22 July 1977, Chinese leader Deng Xiaoping was restored to power after 10 years in exile.

“I don’t care if it’s a white cat or a black cat,” Deng Xiaoping once uttered, “it’s a good cat as long as it catches mice.” It was this sort of pragmatism that helped Deng to lead the transformation of China into the economic powerhouse it is today. Over the years he was a leader of the Communist Party of China, the People’s Liberation Army of China, and the People’s Republic of China. He was a military strategist, a revolutionary, and a statesman, and he was the great architect of the country’s modernisation, its opening up to the international community, and the transformation of traditional socialism into the socialist market economy.

Deng was effectively in charge of China in the years after his restoration to power, from 1978 to 1992, but only after a slow and arduous rise to the top. He was born into a family of Hakka Han ethnicity in Guang’an County, Sichuan Province, on 22 August 1904. His father Deng Wenming was a landowner, and his mother Deng Dan died when he was still a child.

In 1920, when he was just 16 years old, Deng Xiaoping travelled to France as part of the Mouvement Traivail-Etudes work-study abroad initiative. The night prior to his departure, his father asked him what he hoped to achieve and—rather prophetically—he responded, “To learn knowledge and truth from the West in order to save China.”

After crossing the oceans to Marseilles by boat, he studied at schools in Bayeux and Chatillon, and worked a number of jobs including as a fireman on a locomotive and a fitter in a Renault factory. The work was dangerous and poorly paid and it was there—he later explained—that Deng started to understand the disadvantages of capitalism, and to study Marxism.

In 1926 he travelled to the Soviet Union to study at Moscow Sun Yat-sen University, and it was there that he met his first wife. They returned to China and married but, tragically, she died only days after giving birth to their baby girl, who also died. Then in 1933 Deng’s second wife, Jin Weiying, abandoned him after he came under political attack for fighting for the Communist Party. However, after their subsequent victory, and the founding of the People’s Republic of China, his political career took off; so much so that Mao Zedong eventually started to perceive him as a threat.

After the start of the Cultural Revolution in 1966, Deng was exiled to a lowly existence as an ordinary worker in the Xinjian County Tractor Factory in rural Jiangxi Province, and his family were attacked by the Red Guards; his son Deng Pufang was tortured and thrown out of fourth-floor window, which left him paraplegic.

After Mao’s death on 9 September 1976 everything changed once more, and suddenly Deng was again the de facto leader. On 22 July 1977 he was officially restored to power—appointed Vice-Chairman of the Central Committee, Vice-Chairman of the Military Commission and Chief of the General Staff of the People’s Liberation Army—and so he was able to start the modernisation process that he so desired. 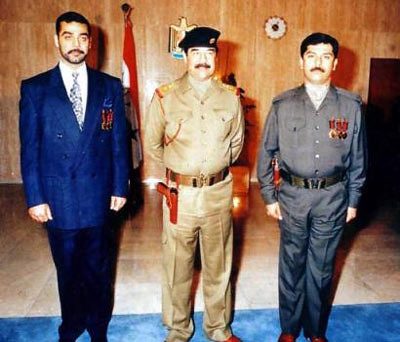 Former Iraqi dictator Saddam Hussein’s sons, Qusay and Uday Hussein, are killed after a three-hour firefight with U.S. forces in the northern Iraqi city of Mosul. It is widely believed that the two men were even more cruel and ruthless than their notorious father, and their death was celebrated among many Iraqis. Uday and Qusay were 39 and 37 years old, respectively, when they died. Both are said to have amassed considerable fortunes through their participation in illegal oil smuggling.

Uday Hussein, as Saddam’s first-born son, was the natural choice to succeed the feared despot. But even the seemingly amoral Saddam took issue with Uday’s extravagant lifestyle—he is said to have personally owned hundreds of cars—and lack of personal discipline. After Uday bludgeoned and stabbed one of Saddam’s favorite attendants to death at a 1988 party, Saddam briefly had him imprisoned and beaten.

In the wake of their deaths, the American government drew criticism for releasing pictures of Uday’s and Qusay’s lifeless bodies, but insisted the move was necessary to convince the skeptical Iraqi people that the long-feared brothers were truly dead. About five months later, on December 13, 2003, their father, who also went into hiding after the U.S. invasion, was found and captured alive by American forces. His trial by special tribunal for multiple crimes committed during his reign began in October 2005. On November 5, 2006, he was found guilty of crimes against humanity and sentenced to death by hanging. After an unsuccessful appeal, Hussein was executed on December 30, 2006.

Sarawak is given independence by Great Britain.

King Edward I of England’s army defeat William Wallace’s Scottish army during the Battle of Falkirk.

The Byzantine emperor Theophilos is defeated by the Abbasids.

The Acts of Union 1707 is agreed upon by the commissioners from the Kingdoms of England and of Scotland, which, when leads to the creation of the Kingdom of Great Britain.