After 11 years of construction, the Aswan High Dam in Egypt is completed.
[rdp-wiki-embed url=’https://en.wikipedia.org/wiki/Aswan_Dam’]

Astronaut Neil Armstrong becomes the first person to walk on the Moon.

Neil Armstrong was a NASA astronaut most famous for being the first person to walk on the moon, on July 20, 1969. An accomplished test pilot, Armstrong also flew on the Gemini 8 mission in 1966. He retired from NASA in 1971 and remained active in the aerospace community, although he chose to keep mostly out of the public spotlight. Armstrong died Aug. 25, 2012, at age 82.

Armstrong was famously reticent about his accomplishments, preferring to focus on the team that helped him get to the moon rather than his own first steps. “I guess we all like to be recognized not for one piece of fireworks, but for the ledger of our daily work,” Armstrong said in an interview on CBS’s “60 Minutes” program in 2005, according to Reuters.

In another interview, when asked what it feels like to have his footprints remain on the moon’s surface for thousands of years, Armstrong said, “I kind of hope that somebody goes up there one of these days and cleans them up,” Reuters added.

An official biography of Armstrong was published in 2005, called “First Man: The Life of Neil A. Armstrong.” It was written by James R. Hansen, a former NASA historian and later a history professor at Auburn University.

Early career and NASA work Armstrong was born in Wapakoneta, Ohio, on Aug. 5, 1930. His parents were Stephen Koenig Armstrong and Viola Louise Engel. Armstrong was a naval aviator from 1949 to 1952 and served in the Korean War. Armstrong got a bachelor of science degree in aeronautical engineering from Purdue University in 1955; much later he received a master of science in aerospace engineering from the University of Southern California in 1970. As a NASA test pilot, Armstrong flew the X-15, a rocket-powered, missile-shaped aircraft that tested the limits of high-altitude flight. He flew more than 200 different aircraft, from jets to gliders and even helicopters.

NASA test pilot Neil Armstrong is seen here next to the X-15 ship #1 after a research flight. In 1962, Armstrong was selected with NASA’s second group of astronauts, who flew on the two-seat Gemini missions to test out space technology, and the three-seat Apollo missions that ultimately took 12 people to the surface of the moon. Armstrong’s first flight was the command pilot of the Gemini 8 mission in March 1966, the sixth crewed mission of that series.

Armstrong and pilot David Scott did the first orbital docking of two spacecraft, joining their Gemini 8 spacecraft to an uncrewed Agena target vehicle. However, the mission quickly turned into an emergency situation when a thruster on the Gemini 8 spacecraft was stuck open. With the astronauts whipping around faster than one revolution per second, Armstrong managed to gain control again by using the re-entry system thrusters. The mission — the first serious emergency in space — ultimately ended safely, but splashed down early because the re-entry system was used.

Armstrong narrowly avoided a nasty accident in May 1968 while using the Lunar Landing Research Vehicle, a machine that could fly somewhat like a lunar module and simulate landings on the moon. Fuel for his thrusters ran out and Armstrong was forced to eject just seconds before the vehicle crashed. Armstrong escaped unharmed. 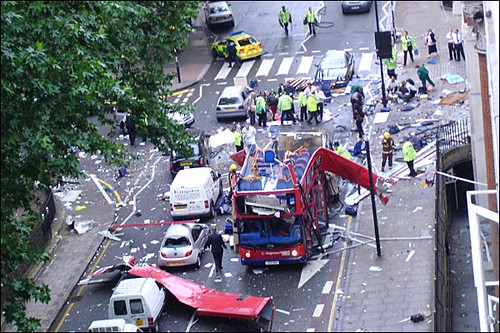 On Thursday 21 July 2005, four attempted bomb attacks disrupted part of London’s public transport system two weeks after the 7 July 2005 London bombings. The explosions occurred around midday at Shepherd’s Bush, Warren Street and Oval stations on the London Underground, and on a bus in Bethnal Green. A fifth bomber dumped his device without attempting to set it off.

Connecting lines and stations were closed and evacuated. Metropolitan Police later said the intention was to cause large-scale loss of life, but only the detonators of the bombs exploded, probably causing the popping sounds reported by witnesses, and only one minor injury was reported. The suspects fled the scenes after their bombs failed to explode.

On Friday 22 July, CCTV images of four suspects wanted in connection with the bombings were released. Two of the men shown in these images were identified by police on Monday 25 July as Muktar Said Ibrahim and Yasin Hassan Omar The resultant manhunt was described by the Metropolitan police commissioner Sir Ian Blair as “the greatest operational challenge ever faced” by the Met. During the manhunt, police misidentified Jean Charles de Menezes as one of the suspected bombers and shot and killed him.

By 29 July, police had arrested all four of the main bombing suspects from 21 July attempted bombings. Yasin Hassan Omar was arrested by police on 27 July, in Birmingham. On 29 July, two more suspects were arrested in London. A fourth suspect, Osman Hussein, was arrested in Rome, Italy, and later extradited to the UK. Police also arrested numerous other people in the course of their investigations.

On 9 July 2007, four defendants, Muktar Said Ibrahim, 29, Yasin Hassan Omar, 26, Ramzi Mohammed, 25, and Hussain Osman, 28, were found guilty of conspiracy to murder. The four attempted bombers were each sentenced to life imprisonment, with a minimum of 40 years’ imprisonment.

A U156 submarine shells Nauset Beach, in Orleans, Massachusetts.

The lowest temperature ever recorded in an inhabited location is recorded at Vostok Station in Antarctica at ?89.2 °C.

The world’s lowest temperature is recorded at Vostok Station, Antarctica at ?89.2 °C.

Israeli Mossad in Norway agents kill a waiter whom they wrongly believed was involved in the 1972 Munich Olympics Massacre.

A tsunami destroys the city of Alexandria, Egypt. 50 000 are killed.