The Mirabal sisters of the Dominican Republic are assassinated.

Jane Goodall arrives at the Gombe Stream Reserve in present-day Tanzania to begin her famous study of chimpanzees in the wild.

Avianca Flight 671, registration HK-177, was a Lockheed Constellation that crashed and burned on landing at Montego Bay, Jamaica, on 21 January 1960. It was and remains the worst accident in Jamaican aviation history.[1]

The flight had originated at Miami International Airport, Florida. The aircraft operating the flight was a Lockheed L-1049E Super Constellation used by Avianca for its Bogota-Montego Bay routes. Thirty-seven of the 46 passengers and crew aboard were killed.

On landing, the plane made a heavy touchdown, bounced, and landed back on the runway, then skidded down the runway in flames. It came to rest upside down, 1900 feet from the runway threshold and 200 feet to the left thereof.[2]

In November of 1960, John Fitzgerald Kennedy was elected President of the United States. Three years later, he was assassinated by Lee Harvey Oswald, shot while in a motorcade going through Dallas, Texas.
Had Richard Paul Pavlick gotten his way, Oswald would have never gotten to pull the trigger. Because Pavlick wanted to kill JFK first.

On December 11, 1960, JFK was the President-Elect and Richard Paul Pavlick was a 73 year old retired postal worker. Both were in Palm Beach, Florida. JFK was there on a vacation of sorts, taking a trip to warmer climates as he prepared to assume the office of the President. Pavlick had followed Kennedy down there with the intention of blowing himself up and taking JFK with him. His plan was simple. He lined his car with dynamite — “enough to blow up a small mountain” per CNN — and outfitted it with a detonation switch. Then, he parked outside the Kennedy’s Palm Beach compound and waited for Kennedy to leave his house to go to Sunday Mass. Pavlick’s aim was to ram his car into JFK’s limo as the President-to-be left his home, blowing both assassin and politician to smithereens.

But JFK did not leave his house alone that morning. He made his way to his limo with his wife, Jacqueline, and children, Caroline and John, Jr., with him. While Pavlick was willing to kill their husband and father, he did not want to kill them, so he resigned himself to trying again another day. He would not get a second chance at murderous infamy. On December 15th, he was arrested by a Palm Beach police officer working off a tip from the Secret Service.

Pavlick’s undoing was the result of deranged postcards he sent to Thomas Murphy, then the Postmaster of Pavlick’s home town of Belmont, New Hampshire. Murphy was put off by the strange tone of the postcards and his curiosity led him to do what Postmasters do — look at the postmarks. He noticed a pattern: Pavlick happened to be in the same general area as JFK, dotting the landscape as Kennedy travelled. Murphy called the local police department who in turn called the Secret Service, and from there, Pavlick’s plan unraveled.

The would-be assassin was committed to a mental institution on January 27th of the following year, a week after Kennedy was inaugurated as the 35th President of the United States, pending charges. These charges were eventually dropped as it became increasingly clear that Pavlick acted out of an inability to distinguish between right and wrong, but nevertheless, Pavlick remained in institutions until December 13, 1966, nearly six years after being apprehended. He died in 1975.

Bonus fact: If Pavlick seems old for a would-be Presidential assassin, your instincts are correct. Lee Harvey Oswald was just 24 years old, making him the youngest of all four of the men who assassinated Presidents. John Wilkes Booth was 26 when he killed Abraham Lincoln; Leon Czolgosz was 28 when he assassinated William McKinley, and Charles Guiteau was 39 when he murdered James A. Garfield.

The Ivory Coast gets its independence from France.

IVORY COAST – August 7. A referendum in 1958 resulted in the Ivory Coast becoming an autonomous republic. In June of 1960, the pro-French Félix Houphouët-Boigny proclaimed the country’s independence, but maintaining close ties between Abidjan and Paris. The Ivory Coast became one of the most prosperous West African nations.

President Félix Houphouët-Boigny and First Lady Marie-Thérèse Houphouët-Boigny in the White House Entrance Hall with President John F. Kennedy and First Lady Jacqueline Kennedy in 1962.
Félix Houphouët-Boigny, the son of a Baoulé chief, became Ivory Coast’s father of independence. In 1944, he formed the country’s first agricultural trade union for African cocoa farmers like himself. Angered that colonial policy favoured French plantation owners, the union members united to recruit migrant workers for their own farms. Houphouët-Boigny soon rose to prominence and within a year was elected to the French Parliament in Paris. A year later, the French abolished forced labour. Houphouët-Boigny established a strong relationship with the French government, expressing a belief that the Ivory Coast would benefit from the relationship, which it did for many years. France appointed him as a minister, the first African to become a minister in a European government.

A turning point in relations with France was reached with the 1956 Overseas Reform Act, which transferred a number of powers from Paris to elected territorial governments in French West Africa and also removed the remaining voting inequities. In 1958, Ivory Coast became an autonomous member of the French Community, which had replaced the French Union.

At independence 1960, the country was easily French West Africa’s most prosperous, contributing over 40% of the region’s total exports. When Houphouët-Boigny became the first president, his government gave farmers good prices for their products to further stimulate production, which was further boosted by a significant immigration of workers from surrounding countries. Coffee production increased significantly, catapulting Ivory Coast into third place in world output, behind Brazil and Colombia. By 1979, the country was the world’s leading producer of cocoa. It also became Africa’s leading exporter of pineapples and palm oil. French technicians contributed to the “Ivoirian miracle”. In other African nations, the people drove out the Europeans following independence, but in Ivory Coast, they poured in. The French community grew from only 30,000 prior to independence to 60,000 in 1980, most of them teachers, managers, and advisors. For 20 years, the economy maintained an annual growth rate of nearly 10%—the highest of Africa’s non-oil-exporting countries.

Cyprus is given its independence from the United Kingdom. 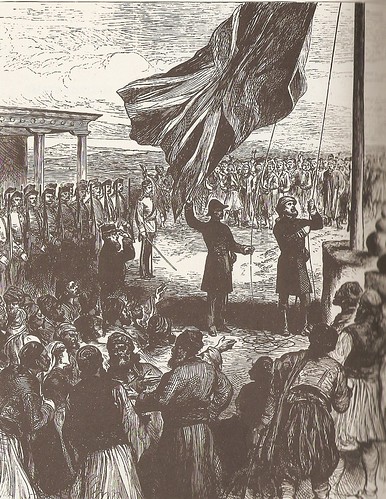 Cyprus gained independence from the United Kingdom on August 16, 1960, but the agreements that led to sovereignty failed to resolve serious differences between the Greek Cypriot and Turkish Cypriot communities.

Cyprus was part of the British Empire from 1914 as a Military occupation from 1914–1925 and a Crown colony from 1925–1960. However, Cyprus’ status as a protectorate of the British Empire ended in 1914 when the Ottoman Empire declared war against the Triple Entente powers, which included Great Britain. Cyprus was then annexed by the British Empire on 5 November 1914. During the course of the First World War Britain offered to cede Cyprus to Greece if they would fulfill treaty obligations to attack Bulgaria, but Greece declined.

Britain proclaimed Cyprus the Crown colony of British Cyprus in 1925, under an undemocratic constitution.
A Cypriot demonstration in the 1930s in favour of Enosis.

International recognition of the new Republic of Turkey resulted from the Treaty of Lausanne in 1923 in which the new Turkish government formally recognised Britain’s sovereignty over Cyprus . The administration was reformed in the latter 1920s, and some members of the Legislative Council were elected by the Cypriots, but their participation was very marginal. The Legislative Council was abolished in 1931.

Greek Cypriots believed the circumstances were right to demand union of the island with Greece, as many of the Aegean and Ionian islands had done following the collapse of the Ottoman Empire. In the years that followed, Greek Cypriots’ demands for enosis, which the British opposed, developed rapidly during the 1930s, leading to the destruction of the Government House in Nicosia, which was burnt down in the 1931 Cyprus Revolt.

The French ship La Coubre explodes in Havana, Cuba. Over 100 are killed.

The French freighter La Coubre exploded in the harbor of Havana, Cuba, on 4 March 1960 while it was unloading 76 tons of munitions. Casualties may have been as high as 100, and many more were injured. Fidel Castro charged it was an act of sabotage on the part of the United States, which denied any involvement.

Unloading explosive ordnance directly onto the dock in Havana was against port regulations. Ships with such cargoes were supposed to be moored in the center of the harbor and their high-risk cargo unloaded onto lighters.[1] La Coubre, a 4,310-ton French vessel, was unloading her cargo of 76 tons of Belgian munitions she had transported from Antwerp to Havana when she exploded at 3:10 pm on 4 March 1960. Thirty minutes after the first explosion, while hundreds of people were involved in a rescue operation organized by the Cuban military, a second, more powerful explosion resulted in additional fatalities and injuries.

At the time of the explosion, Che Guevara was in a meeting at the National Institute of Agrarian Reform headquarters. He drove to the scene and spent the next few hours giving medical attention to the crew members, armed forces personnel, and dock workers who had been injured. The death toll was between 75 and 100; more than 200 people injured.

The first nuclear-powered aircraft carrier, the USS Enterprise, is launched.