Nazi Germany begins its persecution of Jehovah’s Witnesses by shutting down the Watch Tower Society office in Magdeburg.

Hitler takes office as the Chancellor of Germany.

The Blaine Act ends Prohibition in the United States.

“Wets” in Congress perceived that support for Prohibition was waning. A week after the defeat of the Bingham repeal proposal, House “wets” began drafting legislation to amend the Volstead Act to permit the manufacture of beer once more. Their goal was to force a vote before the session of Congress ended in July 1932. With only 34 “wet” votes in the Senate and 190 in the House, repeal lobbyists believed no action could be taken until after the November 1932 elections.

Congressional “wets” received a major boost on February 20 when a leading Democratic candidate for president, Franklin D. Roosevelt, announced he supported repeal of the 18th Amendment as a means of generating tax revenues for the federal government and states. Roosevelt’s support for repeal boosted “wet” support in the House. On February 16, the House Judiciary Committee had voted 14-to-9 against the Beck-Linthicum resolution, which would have asked state legislatures to reaffirm or repeal the 18th Amendment. House “wets” then shocked political leaders in both sides on February 25 by obtaining 110 signatures on a discharge petition for the Beck-Linthicum resolution. The “wets” secured the required 145 signatures for discharge on March 1. The Beck-Linthicum resolution received 187 votes, resulting in the smallest majority “drys” had managed to muster since the start of Prohibition. House “wets”, who considered the vote on Beck-Linthicum only a test of their growing strength, were thrilled by the vote.

The House test vote was encouraging to Senate “wets” as well. On March 19, Blaine’s Judiciary subcommittee favorably reported a bill by Senator Bingham proposing the legalization of 4 percent beer. Surprisingly, the subcommittee report even called modification of the 18th Amendment useless. Three days later, a bipartisan group of 38 Senators surprised the Senate by signing a letter demanding a vote to modify or repeal the 18th Amendment. The letter referred to four resolutions before Blaine’s subcommittee. Senator George W. Norris, chair of the full Judiciary Committee, promised the group that his committee would report at least one of the bills, and give senators a chance to vote on it on the Senate floor.

House “wets” appeared to suffer a setback on March 25 when the House rejected a bill, proposed by Rep. Thomas H. Cullen, to amend the Volstead Act to permit the manufacture of 2.75 percent beer and tax it.

“Wets” in the Senate also lost ground. Blaine began holding hearings on repeal of the 18th Amendment in mid April, and on April 19 the Senate Manufactures Committee unfavorably reported a 4 percent beer bill which had the perverse outcome of enabling a floor vote. In this test vote, “wets” were able to secure only 24 votes.

In May 1932, House “wets” shocked the political establishment again by securing enough signatures on a discharge petition to free the O’Connor-Hull bill from the House Ways and Means Committee. The House defeated the bill, which would have permitted 2.75 percent beer and taxed it at a rate of 3 percent of its retail value, 228 to 169. It was a significant drop in anti-Prohibition support.

The Reichstag passes the Enabling Act of 1933. This makes Adolf Hitler the dictator of Germany.

Hitler had been appointed Chancellor on January 30th 1933. However, he had no intention of acting within a participatory democracy. His plans included the abolition of other political parties with all political powers placed into his hands. Hitler was helped in this by the Reichstag Fire. This put the government building out of use and for the German Parliament to function it needed a suitable building to replace it. The Kroll Opera House was used. It was a convenient choice. It was small enough to make any SA presence look very menacing if Reichstag members were not going to vote accordingly.

However, Hitler could not be sure that the bill would be passed. The March 5th 1933 election had clearly shown that the Nazis were not as popular as Hitler would have wished. They only gained a majority of Deputy seats with the help of the German National Peoples Party. The Communists were no longer an issue as their leaders had been arrested and the party banned after it was blamed for the Reichstag fire. Hitler hoped that the other nationalists would be persuaded to vote for the act. It was the Centre Party that concerned him the most as he felt that those who did not want to vote for the act would rally around the Centre Party. Therefore he made a deal with the party – he would protect all of the rights that Catholics had in Germany as well as foster better relations with the Vatican. It was good enough for the Centre’s party leader, Ludwig Kaas, who advocated that the party support the bill. The only party that did not support the bill was the Social Democrats. They planned to sabotage the proceedings.

German constitutional law stated that any change to the constitution had to have a vote at which 66% of the Reichstag Deputies had to be present. Of these the vote needed to be 66% or over – not the usual bare majority. The Social Democrats knew that if they boycotted the vote, there would not be the required 66% of Reichstag Deputies at the vote – therefore any result would be deemed unconstitutional. The Nazis got around this with ease. The President of the Reichstag was Hermann Goering. He introduced a new procedure that made irrelevant the proposed move of the Social Democrats. Goering’s new procedure was to deem present any Reichstag Deputy who was not at the session but who did not have a good reason not to be there. In fact, 26 Social Democrat Deputies were in hiding for their lives – but as they could not present to the Reichstag a good reason for not being there they were counted as present.

All those who voted against the act were Social Democrats – a brave thing to do when it is considered that the opera house was flooded with SA men who had a deserved reputation for being thugs. The party leader, Otto Wels, openly spoke out against the bill and called on others not to vote for it.

The Enabling Act allowed the Cabinet to introduce legislation without it first going through the Reichstag. Basically the Reichstag Deputies voted to allow themselves to be bypassed. Any legislation passed by the Cabinet did not need presidential approval either. The act had a lifespan of four years before it had to be renewed via the Reichstag – something that happened on two separate occasions with an even more Nazified Reichstag and with what was effectively open voting.

Just how significant was the Enabling Act? Shortly after the bill became law,Joseph Goebbels wrote that Hitler now had full power to push Germany forward. He made no mention of the Cabinet. In fact, there was no Cabinet input in the sense that a modern Cabinet would expect to function. For example, Hitler had given the Centre Party his full guarantee that their power would be protected if they supported the Enabling Act. On July 14th1933, all political parties other than the Nazi Party were banned on the orders of Hitler. It was generally thought that it took just 24 hours to put into legislation something that Hitler had ordered. The Enabling Act also protected the position of President. Such was Hitler’s power that when Hindenburg died in August 1934, he simply merged the positions of Chancellor and President and created the position of F?hrer even though interfering with the position of the President was not allowed even by the terms of the Enabling Act.

Adolf Hitler is sworn in as the Chancellor of Germany.

On this day in 1933, President Paul von Hindenburg names Adolf Hitler, leader or fÜhrer of the National Socialist German Workers Party, as chancellor of Germany.

The year 1932 had seen Hitler’s meteoric rise to prominence in Germany, spurred largely by the German people’s frustration with dismal economic conditions and the still-festering wounds inflicted by defeat in the Great War and the harsh peace terms of the Versailles treaty. A charismatic speaker, Hitler channeled popular discontent with the post-war Weimar government into support for his fledgling Nazi party. In an election held in July 1932, the Nazis won 230 governmental seats; together with the Communists, the next largest party, they made up over half of the Reichstag.

Hindenburg, intimidated by Hitler’s growing popularity and the thuggish nature of his cadre of supporters, the SA, initially refused to make him chancellor. Instead, he appointed General Kurt von Schleicher, who attempted to steal Hitler’s thunder by negotiating with a dissident Nazi faction led by Gregor Strasser. At the next round of elections in November, the Nazis lost ground—but the Communists gained it, a paradoxical effect of Schleicher’s efforts that made right-wing forces in Germany even more determined to get Hitler into power. In a series of complicated negotiations, ex-Chancellor Franz von Papen, backed by prominent German businessmen and the conservative German National People’s Party, convinced Hindenburg to appoint Hitler as chancellor, with the understanding that von Papen as vice-chancellor and other non-Nazis in key government positions would contain and temper Hitler’s more brutal tendencies.

Hitler’s emergence as chancellor on January 30, 1933, marked a crucial turning point for Germany and, ultimately, for the world. His plan, embraced by much of the German population, was to do away with politics and make Germany a powerful, unified one-party state. He began immediately, ordering a rapid expansion of the state police, the Gestapo, and putting Hermann Goering in charge of a new security force, composed entirely of Nazis and dedicated to stamping out whatever opposition to his party might arise. From that moment on, Nazi Germany was off and running, and there was little Hindenburg or von Papen—or anyone—could do to stop it.

The Iraqi government kills over 3000 Assyrians in the village of Simele. 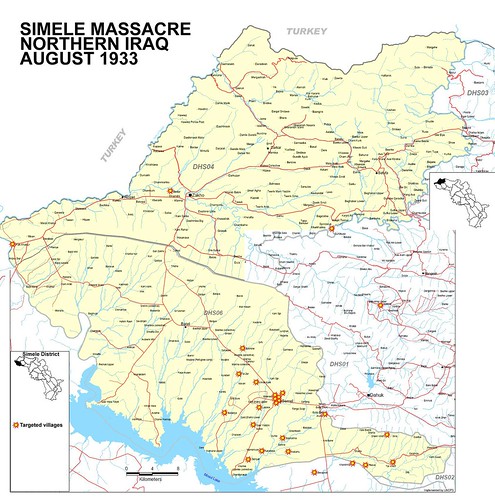 The Simmele Massacre of Assyrians occurred between August 7 and August 11, 1933, in the town of Simmele, North Iraq, and its surroundings. It was carried out by the Iraqi Army, led by General Bakir Sidqi, a Kurd, and Kurdish and Arab irregulars. The number of victims has been subsequently determined by researchers to be 3,000, since the massacre was not confined only to the village of Simmele.

Simmel is on the main road to Zakho, about eight miles from Dohuk, under the administration of which qodha it came. It was the largest village in the neighborhood and consisted of over one hundred Assyrians and ten Arab houses. The total population would have been about 700, most of the Assyrians belonging to the Baz tribe, with others of the Upper Tiyari and the Diz. The headman was a strong supporter of the Mar Shimun and with fifty others had followed Yacu into Syria. These fifty were almost entirely Tiyari, hardly any of the Baz being among them. The feeling of unrest in the village increased. On August 8th the Qaimaqam of Zakho appeared with a lorry full of soldiers.

No satisfactory answer has yet been given to the question why he should have come with troops into a district that was outside his administration. He entered the village and told the Assyrians to surrender their rifles, as he feared that fighting might occur between the rebel Assyrians and the Government forces, in which case the people of Simmel would be less likely to be involved if they had no rifles. Plausibly, but with lies in his heart, he assured them that they would be safe under the protection of the Iraqi flag which flew over the police post for Simmel, being a large village, had a police post of one sergeant and four men. The Assyrians then handed in their arms, which were taken away by the troops.