The Islamic State of Iraq and the Levant requires Christians to either accept dhimmi status, emigrate from ISIL lands, or be killed.

The First Vatican Council decrees the dogma of papal infallibility.

First dogmatic constitution on the Church of Christ

Pius, bishop, servant of the servants of God, with the approval of the Sacred Council, for an everlasting record.

1. The eternal shepherd and guardian of our souls, in order to render permanent the saving work of redemption, determined to build a Church in which, as in the house of the living God, all the faithful should be linked by the bond of one faith and charity.

2. Therefore, before he was glorified, he besought his Father, not for the apostles only, but also for those who were to believe in him through their word, that they all might be one as the Son himself and the Father are one.

3. So then, just as he sent apostles, whom he chose out of the world, even as he had been sent by the Father, in like manner it was his will that in his Church there should be shepherds and teachers until the end of time.

4. In order, then, that the episcopal office should be one and undivided and that, by the union of the clergy, the whole multitude of believers should be held together in the unity of faith and communion, he set blessed Peter over the rest of the apostles and instituted in him the permanent principle of both unities and their visible foundation.

6. And since the gates of hell trying, if they can, to overthrow the Church, make their assault with a hatred that increases day by day against its divinely laid foundation, we judge it necessary, with the approbation of the Sacred Council, and for the protection, defense and growth of the Catholic flock, to propound the doctrine concerning the 1. institution, 2. permanence and 3. nature of the sacred and apostolic primacy, upon which the strength and coherence of the whole Church depends.

7. This doctrine is to be believed and held by all the faithful in accordance with the ancient and unchanging faith of the whole Church.

8. Furthermore, we shall proscribe and condemn the contrary errors which are so harmful to the Lord’s flock.

The coronation of Emperor Pedro II of Brazil takes place. 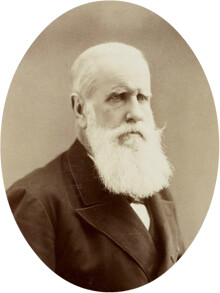 Dom Pedro II, nicknamed “the Magnanimous”, was the second and last ruler of the Empire of Brazil, reigning for over 58 years. Born in Rio de Janeiro, he was the seventh child of Emperor Dom Pedro I of Brazil and Empress Dona Maria Leopoldina and thus a member of the Brazilian branch of the House of Braganza. His father’s abrupt abdication and departure to Europe in 1831 left a five-year-old Pedro II as Emperor and led to a grim and lonely childhood and adolescence. Obliged to spend his time studying in preparation for rule, he knew only brief moments of happiness and encountered few friends of his age. His experiences with court intrigues and political disputes during this period greatly affected his later character; he grew into a man with a strong sense of duty and devotion toward his country and his people, yet increasingly resentful of his role as monarch.

The reign of Pedro II thus came to an unusual end—he was overthrown while highly regarded by the people and at the pinnacle of his popularity, and some of his accomplishments were soon brought to naught as Brazil slipped into a long period of weak governments, dictatorships, and constitutional and economic crises. The men who had exiled him soon began to see in him a model for the Brazilian republic. A few decades after his death, his reputation was restored and his remains were returned to Brazil with celebrations nationwide. Historians have regarded the Emperor in an extremely positive light and several have ranked him as the greatest Brazilian.

The First Vatican Council decrees the principle of papal infallibility.

The First Vatican Council hands down the dogma of papal infallibility.

France and England agree to the Truce of Leulinghem during the Hundred Years’ War.

Nadia Comaneci is the first athlete in Olympic Games history to score a perfect 10 in gymnastics at the 1976 Montreal Summer Olympics.

James Oliver Huberty opens fire, killing 21 people and injuring 19 others at McDonald’s in San Ysidro, California. He is shot dead by police.