Watergate scandal: Five White House operatives are arrested for burgling the offices of the Democratic National Committee during an attempt by members of the administration of President Richard M. Nixon to illegally wiretap the political opposition as part of a broader campaign to subvert the democratic process

National holiday in Iceland commemorating independence from Denmark (17 June 1944)
Not to be confused with Þjóðhátíð.

Icelandic National Day (Icelandic: Þjóðhátíðardagurinn, the day of the nation's celebration) is an annual holiday in Iceland which commemorates the foundation of The Republic of Iceland on 17 June 1944. This date also marks the end of Iceland's centuries old ties with Denmark.[1] The date was chosen to coincide with the birthday of Jón Sigurðsson, a major figure of Icelandic culture and the leader of the 19th century Icelandic independence movement.[2]

The formation of the republic was based on a clause in the 1918 Act of Union with Denmark, which allowed for a revision in 1943, as well as the results of the 1944 plebiscite.

German occupation of Denmark meant that the revision of the Act of Union could not take place in 1943. But the referendum on abolishing the monarchy went ahead in 1944 while Denmark was still occupied by Germany and was overwhelmingly approved. At the time, the US Military had taken over the defence of Iceland at Iceland's invitation, after being occupied by Britain in 1940. Although saddened by the results of the plebiscite, King Christian X sent a letter on 17 June 1944 congratulating Icelanders on the establishment of a republic.

Abolishing the monarchy resulted in little change to the Icelandic constitution, "The King" was merely substituted for "The President". Icelanders celebrated the severing of all formal ties with Denmark after centuries of sometimes difficult Danish rule. Iceland's national day was chosen as the birthday of Jón Sigurðsson who pioneered the early independence movement. Mr. Sveinn Björnsson became the first President of Iceland.

Today, Icelanders celebrate this holiday on a national scale. The celebration traditionally take the form of parades through each city, town, or village usually with a brass band leading the way. Riders on Icelandic horses often precede the brass band while a flag-bearing troop from the Icelandic scout movement traditionally follow the band. After the parade speeches are held out in the open, including one from Fjallkonan (the woman of the mountain), clad in Skautbúningur, who recites a poem. She represents the fierce spirit of the Icelandic nation and of Icelandic nature. In many ways this recalls the period of romanticism that reigned when the first steps toward independence were taken. After the public speeches are over, less formal celebrations ensue, usually including a variety of musical performances.

The Wairau Affray, the first serious clash of arms between M?ori and British settlers in the New Zealand Wars, takes place. 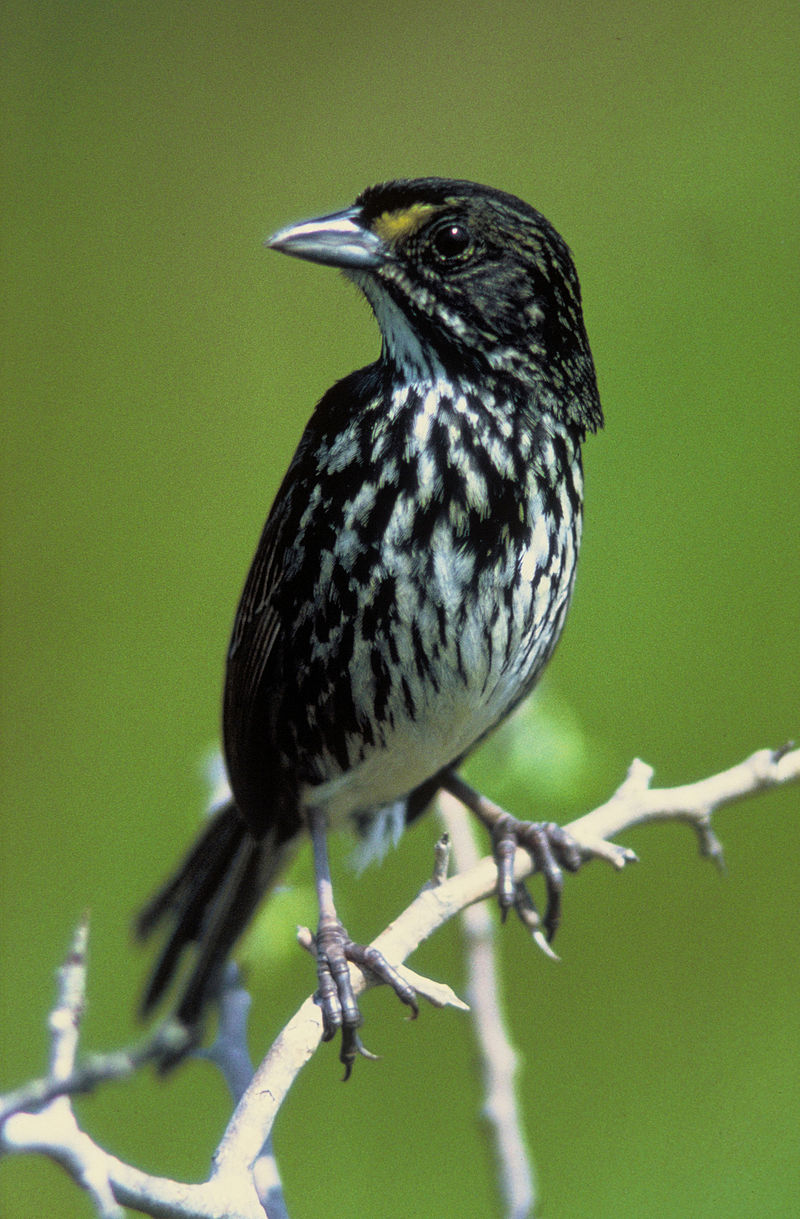 he dusky seaside sparrow, Ammodramus maritimus nigrescens, was a non-migratory subspecies of the seaside sparrow, found in Florida in the natural salt marshes of Merritt Island and along the St. Johns River. The last definite known individual died on June 17, 1987, and the subspecies was officially declared extinct in December 1990.

When Merritt Island was flooded with the goal of reducing the mosquito population around the Kennedy Space Center, the sparrows’ nesting grounds were devastated, and their numbers plummeted. Later, the marshes surrounding the river were drained to facilitate highway construction; this was a further blow. Eventually, pollution and pesticides took such a high toll that by 1979, only six dusky seaside sparrows were known to exist — all of whom were males; a female was last sighted in 1975.

“Orange Band” was left by himself on the St. Johns Unit of the St. Johns NWR[5] after a yellow-leg-banded dusky was captured in 1979. Field observations of color banded sparrows from 1975 to 1979 indicated that dusky seaside sparrows seldom traveled more than a mile or two in their lifetimes. In April 1980, “Orange Band” was again observed on the St. Johns Unit, but was surprisingly captured in June eight miles south on the Beeline Unit in the company of a dusky with a green leg band. Before finding “Green Band”, “Orange Band” passed the general vicinity of the two unbanded dusky seaside sparrows.

In 1983 the last four living dusky seaside sparrows were taken to the Walt Disney World Resort, to continue crossbreeding and living out their days in a protected habitat on the Discovery Island nature reserve. By March 31, 1986, only “Orange Band” remained.

Despite being blind in one eye, “Orange Band” reached extreme old age for a sparrow, living at least nine years, and possibly as many as thirteen, before dying on June 17, 1987.

After the death of the final “pure” dusky sparrow, the breeding program was discontinued due to the fact that it was thought the hybrids that exist could not reproduce to create dusky sparrows, since they did not share the proper mtDNA that dusky sparrows possess. However, research done on a similar species known as Passerella iliaca, or the fox sparrow, was able to show that some subspecies of one plumage group had the plumage of another despite having the “wrong” mtDNA type. This potentially meant that if the breeding program was continued with the dusky sparrow hybrids, sparrows with the same color plumage as the dusky sparrows would eventually be produced. Unfortunately, shortly after the breeding program was halted, the remaining hybrid sparrows either died or escaped captivity, leading to the final extinction of the taxon.
“Green Band” proved elusive, and was never recaptured after having been banded. He was last seen on July 23, 1980. 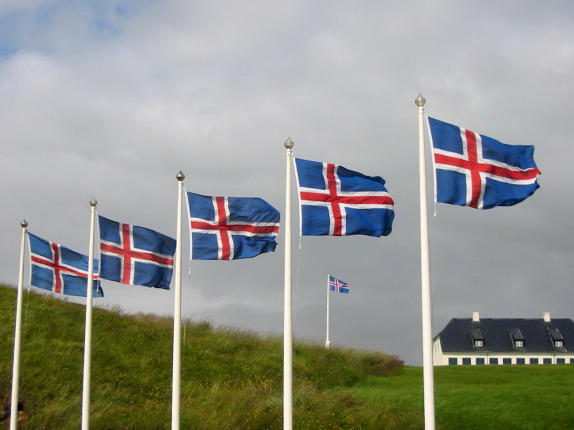 Iceland during World War II joined Denmark in asserting neutrality. After the German occupation of Denmark on 9 April 1940, Iceland’s parliament declared that the Icelandic government should assume the Danish king’s authority and take control over foreign affairs and other matters previously handled by Denmark on behalf of Iceland.Both countries are full members of the Council of the Baltic Sea States, Nordic Council, NATO, and Council of Europe. There are around 18,000 Icelanders living in Denmark and 2,900 Danes living in Iceland.

The relationship between Iceland and Denmark remained close after Iceland’s independence, and for many years Danish was taught as the second language in Iceland, and is still taught as a third language from seventh grade onward.

A month later, British Armed Forces occupied Iceland, violating Icelandic neutrality. In 1941, responsibility for the occupation was taken over by the United States with the 1st Provisional Marine Brigade landing in the country. Allied occupation of Iceland lasted throughout the war.

On 31 December 1943, the Act of Union agreement expired after 25 years. Beginning on 20 May 1944, Icelanders voted in a four-day plebiscite on whether to terminate the union with Denmark and establish a republic. The vote was 97% in favour of ending the union and 95% in favour of the new republican constitution. Iceland formally became an independent republic on 17 June 1944, with Sveinn Björnsson as the first president.

The Statue of Liberty arrives in New York.

After a televised low-speed highway pursuit, OJ Simpson is arrested for the murders of his wife, Nicole Brown Simpson, and her friend Ronald Goldman.

Five White House staffers are arrested for burglarizing the offices of the Democratic National Committee, in an attempt by some members of the Republican party to illegally wiretap the opposition. This was called the Watergate Scandal.