John F. Kennedy Jr., his wife, Carolyn, and her sister, Lauren Bessette, died when the Piper Saratoga PA-32R aircraft he was piloting crashed into the Atlantic Ocean off the coast of Martha’s Vineyard.

The Mont Blanc Tunnel is a highway tunnel in Europe, under the Mont Blanc mountain in the Alps. It links Chamonix, Haute-Savoie, France with Courmayeur, Aosta Valley, Italy, via European route E25, in particular the motorway from Geneva A40 of France to Turin A5 of Italy. The passageway is one of the major trans-Alpine transport routes, particularly for Italy, which relies on this tunnel for transporting as much as one-third of its freight to northern Europe. It reduces the route from France to Turin by 50 kilometres 30 miles and to Milan by 100 km 60 mi. Northeast of Mont Blanc’s summit, the tunnel is about 15 km 10 mi southwest of the tripoint with Switzerland, near Mont Dolent.

The tunnel passes almost exactly under the summit of the Aiguille du Midi. At this spot, it lies 2480m beneath the surface, making it the world’s second deepest operational tunnel after the Gotthard Base Tunnel, which is slightly deeper.

Plans to widen the tunnel were never implemented because of lack of financing and fierce opposition of local residents who objected to the harmful effects of increased heavy traffic.

The Mont Blanc Tunnel was originally managed by two public companies, each managing half of the tunnel.

The Mont Blanc Tunnel linking France and Italy is opened. 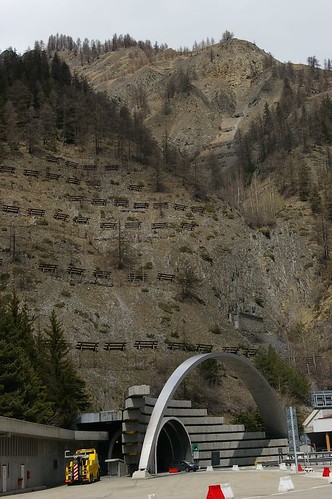 After 19 years of planning and construction, the Mont Blanc Tunnel officially opens. The new tunnel stretches 7 miles, linking the French town of Chamonix and the Italian town of Courmayeur. Buried 1.5 miles under the Alps’ highest peak, it becomes the world’s deepest road tunnel beneath rock and gains infamy after a deadly 1999 fire.

Until the opening of the tunnel, road traffic in the Alps between France and Italy wended its way over hairpin turns and sharp grades, with mountain passes closed the majority of the year because of snow. Italian construction teams began drilling a tunnel into Mont Blanc (or Monte Bianco on their side) to build a year-round route in 1946. The next year, France and Italy signed an agreement to build the tunnel together.

Construction, however, did not begin in earnest until May 30, 1959, with the help of an 82-ton tunnel-boring machine. Tunneling began at 4,091 feet on the French side and at 4,530 feet on the Italian side.

It took 783 tons of explosives to complete the drilling. The French and Italian teams met Aug. 4, 1962, with a discrepancy of only 5.12 inches between the two sides.

When it opened in a ceremony featuring Presidents Charles De Gaulle of France and Giuseppe Saragat of Italy, the Mont Blanc Tunnel became the world’s longest highway tunnel, more than three times longer than the previous recordholder, Liverpool’s Mersey Tunnel.

The beginning of the Islamic calendar.

American prisoners of war were massacred by North Korean Army.

The world’s first ever parking meter was installed in Oklahoma City, Oklahoma.

The Coronation of Richard II of England.

John F. Kennedy, Jr. dies when his plane crashes into the Atlantic Ocean off the coast of Martha’s Vineyard.