Pan Am Flight 73 from Mumbai, India with 358 people on board is hijacked at Karachi International Airport.

On September 15, 1947, Typhoon Kathleen made landfall in the Kanagawa Prefecture, just south of Tokyo. One-minute sustained winds at landfall were estimated at 120 km/h—just barely equivalent to a Category 1 hurricane. In Shizuoka Prefecture, south of Kanagawa, one-minute sustained winds exceeding 88 km/h tropical storm strength were reported. Having weakened by the time of landfall, wind damage was restricted to towns along the immediate coast.

More extensive, however, was the damage from precipitation-induced flooding from Typhoon Kathleen, which dropped between 300 and 800 mm of rain in the Tone River basin in just two days from September 13 to 15—yielding the highest flood discharge ever observed. North and east of Tokyo, several dikes were breached and embankments suffered failures, resulting in severe flooding along the Tone River, particularly in Kurihashi. More than 303,000 buildings were inundated, and 1,077 people were killed. 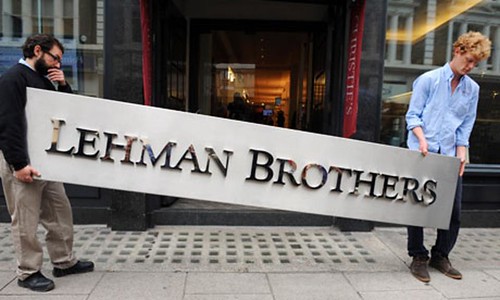 The 158-year-old firm, which survived railroad bankruptcies of the 1800s, the Great Depression in the 1930s and the collapse of Long-Term Capital Management a decade ago, filed a Chapter 11 petition with U.S. Bankruptcy Court in Manhattan on Monday. The collapse of Lehman, which listed more than US$613-billion of debt, dwarves WorldCom Inc.’s insolvency in 2002 and Drexel Burnham Lambert’s failure in 1990.

Lehman was forced into bankruptcy after Barclays PLC and Bank of America Corp. abandoned takeover talks on Sunday and the company lost 94% of its market value this year. Chief Executive Officer Richard Fuld, who turned the New York-based firm into the biggest underwriter of mortgage-backed securities at the top of the U.S. real estate market, joins his counterparts at Bear Stearns Cos., Merrill Lynch & Co. and more than 10 banks that couldn’t survive this year’s credit crunch.

Lehman shares dropped 81% in Frankfurt trading to 75 cents from their US$3.65 close in New York on Friday. UBS AG, HBOS PLC, and Axa SA led a decline of more than 3% for European stock markets on speculation a forced sale of Lehman’s assets could lead to further writedowns at other banks.

Hurricane Carla hits land in Texas with winds of 175 miles per hour.

Hurricane Carla ranks as the most intense U.S. tropical cyclone landfall on the Hurricane history. Carla developed from an area of squally weather in the southwestern Caribbean Sea on September 3. Initially a tropical depression, it strengthened slowly while heading northwestward, and by September 5, the system was upgraded to Tropical Storm Carla. About 24 hours later, Carla was upgraded to a hurricane. The storm curved northward while approaching the Yucatán Channel. Carla entered the Gulf of Mexico while passing just northeast of the Yucatán Peninsula. By early on the following day, the storm became a major hurricane after reaching Category 3 intensity. Resuming its northwestward course, Carla continued intensification and on September 11, it was upgraded to a Category 5 hurricane. Rapidly moving northeastward, Carla’s remnants reached the Labrador Sea, Canada and dissipated on September 17, 1961.

The John Bull becomes the oldest operable steam locomotive in the world when the Smithsonian Institution operates it under its own power outside Washington, D.C.

The Soviet ship Poltava heads toward Cuba to set in motion the Cuban Missile Crisis.

The official opening of the Liverpool to Manchester railway line.

The Nuremberg Laws come into effect to deprive German Jews of citizenship.

The climax of the Battle of Britain, with the UK Royal Air Force shoots down large numbers of Germany’s Luftwaffe aircraft.