An appeals court orders the University of Mississippi to admit James Meredith, the first African-American student admitted to the segregated university.

Super Mario Bros. is released in Japan for the NES, which starts the Super Mario series of platforming games.

On June 20th 1789 the newly formed National Assembly gathered in a Versailles tennis court and pledged not to disband until France had a working constitution. Their desire for a constitution was a product of the Enlightenment and the American Revolution. The deputies of the Third Estate believed that any reforms to the Ancien Régime must be outlined in and guaranteed by a written framework. A constitution would define the authority, structure and powers of the new government. This would prevent or limit the abuses and injustices of the old order. The National Assembly set about drafting a national constitution almost immediately. The process was a long and difficult one, hampered by differences of opinion, growing radicalism and the events of 1789-91. Their deliberations eventually produced the Constitution of 1791, which was ratified in September that year. This document established a constitutional monarchy and incorporated several political ideas from the Enlightenment. The fate of the 1791 Constitution, however, hinged on the attitude and actions of King Louis XVI.

Fascination with constitutions and constitutional government was a creature of the Enlightenment. Before the 18th century, monarchical and absolutist governments acted without any form of written constitution. The structures and power of government were shaped and limited by internal forces and events – if they were limited at all. Britain had no written constitution, however, the power of the British monarchy had been constrained by Britain’s nobility, its parliament, the Civil War, the Glorious Revolution and other factors. Over time, the British system developed a balance of power between the monarch, the parliament, the aristocracy and the judiciary. But the idea that political power would sort itself out over time was not acceptable to Enlightenment philosophers. Men like John Locke, Baron de Montesquieu and Thomas Paine believed that government must be founded on rational principles and organised in a way that best serves the people. The best device for ensuring this was a written constitution, a foundation law that defines the structures and powers of government, as well as rules and instructions for its operation.

constitution of 1791
This image shows the Three Estates working together to construct a constitution
The French revolutionaries had before them a working model of a national constitution. The United States Constitution was drafted in 1787 and ratified by the American states the following year. The American constitution embraced and codified several Enlightenment ideas, such as Jean-Jacques Rousseau‘s popular sovereignty and Montesquieu’s separation of powers. There was one significant difference: the American constitution established a republican political system with an elected president as its chief executive. In France, however, the National Constituent Assembly remained wedded to the idea of a constitutional monarchy. The Assembly wanted to retain the king but to ensure that his executive power was subordinate to both the law and the public good. This presented the Assembly with two concerns. First, they had to find a constitutional role for the king and determine what political powers, if any, he should retain. Second, a constitutional monarchy would be entirely dependent on having a king loyal to the constitution. In the years that followed, both caused problems for the national government.

The preparation and drafting of the constitution began on July 6th 1789, when the National Constituent Assembly appointed a preliminary constitutional committee. This committee was made permanent and expanded to 12 men on July 14th, the day of the Bastille raid. Among the members of the constitutional committee were Charles de Talleyrand, Bishop of Autun; the radical Bretonist Isaac le Chapelier; the conservative lawyer Jean-Joseph Mounier; and Emmanuel Sieyès, author of What is the Third Estate? Almost immediately, the constitutional committee cleaved into two factions. One faction favoured a bicameral legislature and the retention of strong executive powers for the king, including an absolute veto. This group, which included Mounier and the Marquis de Lafayette, was dubbed the Monarchiens or ‘English faction’. A second group wanted a strong unicameral legislature and a monarchy with very limited power. This group, led by Sieyès and Talleyrand, won the day in the National Constituent Assembly.

1791 constitution
Louis XVI takes an oath to uphold and respect the Constitution of 1791
By October 1789, the committee was wrestling with the question of exactly who would elect the government. They decided to separate the population into two classes: ‘active citizens’ and ‘passive citizens’. ‘Active citizens’ were males over the age of 25 who paid annual taxes equivalent to at least three days’ wages. This was, in effect, a property qualification on voting rights. In today’s world, where universal suffrage is the norm, this seems grossly unfair – however, property restrictions on voting were quite common in 18th century Europe. Voting was not a natural right conferred on all: it was a privilege available to those who owned property and paid tax. By way of comparison, England in 1780 was a nation of around eight million people, yet only 214,000 people were eligible to vote. The National Constituent Assembly’s property qualifications were considerably more generous than that. They would have extended voting rights to around 4.3 million Frenchmen. Despite this, radicals in the political clubs and sections demanded that voting rights be granted to all men, regardless of earnings or property.

The other feature of the Constitution of 1791 was the revised role of the king. The constitution amended Louis XVI’s title from “King of France” to “King of the French”. This implied that the king’s power emanated from the people and the law, not from divine right or national sovereignty. The king was granted a civil list of 25 million livres, a reduction of around 20 million livres on his spending before the revolution. In terms of executive power, the king retained the right to form a cabinet, to select and appoint ministers. A more pressing question was whether he would have the power to block laws passed by the legislature. Again, this was resolved with debate and compromise. The Monarchiens, most notably Honore Mirabeau, argued for the king to be granted an absolute veto, the executive right to block any legislation. Democratic deputies argued for a more limited veto and some for no veto at all. It was eventually decided to give the king a suspensive veto. He could deny assent to bills and withhold this assent for up to five years. After this time, if assent had not been granted by the king, the Assembly could enact the bill without his approval.

Even as the constitution was being finalised, it was being overtaken by the events of the revolution. In June 1791 the king and his family stole away from the Tuileries and fled Paris; they were detained at Varennes the following morning. The king’s attempt to escape Paris and the revolution brought anti-royalist and republican sentiment to the boil. The National Constituent Assembly tried riding out the storm by claiming the royal family had been abducted and reinstating the king – but the Cordeliers, the radical Jacobins and the sans culottes of Paris were not buying it. The Constitution of 1791 was passed in September but was already fatally compromised by the king’s betrayal. France now had a constitutional monarchy but the monarch, by his actions, had shown no faith in the constitution. In a conversation with the conservative politician Bertrand de Molleville, Louis XVI suggested that he would bring about change by making the new constitution unworkable:

The first flight of a fixed wing aircraft in Europe takes place. 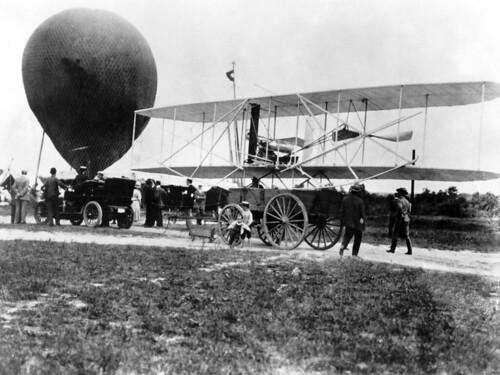 In 1906, the Brazilian Alberto Santos-Dumont made public flights in France with his 14-bis. A canard pusher biplane with pronounced wing dihedral, it had a Hargrave-style box-cell wing with a forward-mounted “boxkite” assembly which was movable to act as both elevator and rudder. He later added auxiliary surfaces between the wings as primitive ailerons to provide lateral control. His flight was the first made by a powered heavier-than-air machine to be verified by the Aéro-Club de France, and won the Deutsch-Archdeacon Prize for the first officially observed flight of more than 25 metres. It later set the first world record recognized by the Federation Aeronautique Internationale by flying 220 metres in 21.5 seconds.

The next year Louis Blériot flew the Blériot VII, a tractor monoplane with full three-axis control using the horizontal tail surfaces as combined elevators and ailerons. Its immediate descendant, the Blériot VIII, was the very first airframe to bring together the recognizable elements of the modern aircraft flight control system in April 1908. Where Horatio Phillips and Traian Vuia had failed, Blériot’s was the first practical tractor monoplane and marked the start of a trend in French aviation. By 1909, he had developed this configuration to the point where the Blériot XI was able to cross the English Channel, among other refinements using the tail surfaces only as elevators and using wing warping for lateral control.

Another design that appeared in 1907 was the Voisin biplane. This lacked any provision for lateral control, and could only make shallow turns using only rudder control, but was flown with increasing success during the year by Henri Farman, and on 13 January 1908 he won the 50,000 francs Deutsch de la Meurthe-Archdeacon Grand Prix de l’Aviation for being the first aviator to complete an officially observed 1 kilometre closed circuit flight, including taking off and landing under the aircraft’s own power.

The United Nations General Assembly adopts the Declaration on the Rights of Indigenous Peoples.

The United Kingdon, Austria and the Kingdom of Sardinia sign the Treaty of Worms.

The Roman Emperor, Claudius is poisoned and dies. His stepson Nero succeeds him to the throne.