Mumbai is rocked by three bomb blasts during the evening rush hour, killing 26 and injuring 130.

The Live Aid benefit concert takes place in London and Philadelphia, as well as other venues such as Moscow and Sydney.

The Carabinieri, the national gendarmerie of Italy, is set up.

Inspired by the French Gendarmerie, the corps was created by King Victor Emmanuel I of Savoy with the aim of providing the Kingdom of Sardinia with a police corps. Previously, police duties were managed by the Dragoni di Sardegna Corps, created in 1726 and composed of volunteers, after French soldiers had occupied Turin at the end of the 18th century and later abandoned it to the Kingdom of Piedmont, the Royal Carabinieri Corps was instituted under the Royal Patents of 13 July 1814.

The new force was divided into divisions on the scale of one division for each province, the divisions were further divided into companies and subdivided into lieutenancies, which commanded and coordinated the local police stations and were distributed throughout the national territory in direct contact with the public.

Photo of a Carabiniere around 1875. The ‘Medal of Italian Independence’ is worn, indicating a veteran of the Risorgimento.
In 1868, the Corazzieri mounted division was formed – initially as an escort of honour for the sovereign, and since 1946 for the President of the Republic, the Italian unification saw the number of divisions increased, and on 24 January 1861 the Carabinieri were appointed the “First Force” of the new national military organization.

In May 1915 Italian troops marched to encompass South Tyrol, territory of their former allies the Austro-Hungarian empire, in the Fronte italiano campaign. The defenders had sufficient time to prepare strong fortifications there, and in the Carso theatre to the east, and the Italian regiments, under overall command of General Cadorna, found themselves repeatedly repulsed in harsh fighting. The role of the Carabinieri was to act as barrier troops, setting up machine gun posts to control the rear of the attacking regiments and prevent desertion. 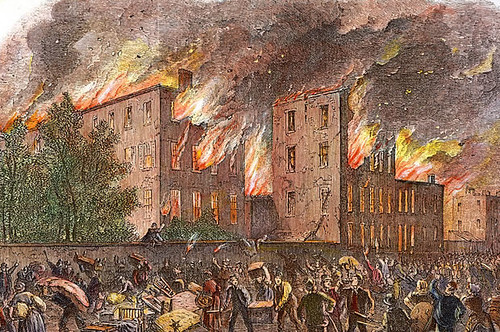 On July 13, 1863, as the second day of a new military draft lottery in New York City got underway, demonstrations broke out across the city in what began as an organized opposition to the first federally mandated conscription laws in the nation’s history, but soon morphed into a violent uprising against the city’s wealthy elite; its African-American residents; and the very idea of the Civil War itself. The New York City Draft Riots, which would wreak havoc on the city for four days and remain the largest civilian insurrection in American history, exposed the deep racial, economic and social divides that threatened to tear the nation’s largest city apart in the midst of the American Civil War.

Thanks to its status as the business capital of the United States, New York City was a deeply divided city at the start of the Civil War in April 1861. Its merchants and financial institutions were loath to lose their southern business and the city’s then-mayor, Fernando Wood, had called for the city to secede from the Union. Meanwhile, to the city’s poorer citizens, the war increasingly came to be seen as benefitting only the rich, as the coffers of the city’s elites filled with the financial spoils of battle and the conflict became known as a “rich man’s war, poor man’s battle.” The passage of the nation’s first military draft act, in March 1863, only worsened the situation. Not only did it allow men to buy their way out of military service by paying a commutation fee of $300 , it also exempted blacks from the draft, as they were not yet considered American citizens. Opposition to the draft was widespread across the North, and in New York, some of the loudest critics of the bill could be found in city government, as politicians railed against the legality of the bill and its impact on the city’s working class poor.

The Battle of the Vosges between French forces and those of Prussia and Austria takes lace.

The Treaty of Berlin is agreed to which redraws the map of the Balkans. Serbia, Montenegro and Romania become independent of the Ottoman Empire.

In Los Angeles, The Hollywood Sign is officially dedicated above Hollywood.