The Our Lady of the Angels School fire in Chicago kills 92 children and three nuns.

Peter I is crowned Emperor of Brazil.

English: Peter I; 12 October 1798 – 24 September 1834, nicknamed “the Liberator”, was the founder and first ruler of the Empire of Brazil. As King Dom Pedro IV, he reigned briefly over Portugal, where he also became known as “the Liberator” as well as “the Soldier King”. Born in Lisbon, Pedro I was the fourth child of King Dom João VI of Portugal and Queen Carlota Joaquina, and thus a member of the House of Braganza. When their country was invaded by French troops in 1807, he and his family fled to Portugal’s largest and wealthiest colony, Brazil.

The outbreak of the Liberal Revolution of 1820 in Lisbon compelled Pedro I’s father to return to Portugal in April 1821, leaving him to rule Brazil as regent. He had to deal with threats from revolutionaries and insubordination by Portuguese troops, all of which he subdued. The Portuguese government’s threat to revoke the political autonomy that Brazil had enjoyed since 1808 was met with widespread discontent in Brazil. Pedro I chose the Brazilian side and declared Brazil’s independence from Portugal on 7 September 1822. On 12 October, he was acclaimed Brazilian emperor and by March 1824 had defeated all armies loyal to Portugal. A few months later, Pedro I crushed the short-lived Confederation of the Equator, a failed secession attempt by provincial rebels in Brazil’s northeast.

A secessionist rebellion in the southern province of Cisplatina in early 1825, and the subsequent attempt by the United Provinces of the Río de la Plata to annex it, led the Empire into the Cisplatine War. In March 1826, Pedro I briefly became king of Portugal before abdicating in favor of his eldest daughter, Dona Maria II. The situation worsened in 1828 when the war in the south resulted in Brazil’s loss of Cisplatina. During the same year in Lisbon, Maria II’s throne was usurped by Prince Dom Miguel, Pedro I’s younger brother. The Emperor’s concurrent and scandalous sexual affair with a female courtier tarnished his reputation. Other difficulties arose in the Brazilian parliament, where a struggle over whether the government would be chosen by the monarch or by the legislature dominated political debates from 1826 to 1831. Unable to deal with problems in both Brazil and Portugal simultaneously, on 7 April 1831 Pedro I abdicated in favor of his son Dom Pedro II, and sailed for Europe.

Pedro I invaded Portugal at the head of an army in July 1832. Faced at first with what seemed a national civil war, he soon became involved in a wider conflict that enveloped the Iberian Peninsula in a struggle between proponents of liberalism and those seeking a return to absolutism. Pedro I died of tuberculosis on 24 September 1834, just a few months after he and the liberals had emerged victorious. He was hailed by both contemporaries and posterity as a key figure who helped spread the liberal ideals that allowed Brazil and Portugal to move from Absolutist regimes to representative forms of government.

The people of Brazil, who had enjoyed the privilege of being the seat of royal authority, did not take well to returning to colony status. Pedro took his father’s advice, and that of his wife, who wrote to him: “The apple is ripe: pick it now, or it will rot.” Pedro dramatically declared independence on September 7, 1822 in the city of São Paulo. He was crowned Emperor of Brazil on December 1, 1822. Independence was achieved with very little bloodshed: some Portuguese loyalists fought in isolated locations, but by 1824 all of Brazil was unified with relatively little violence. In this, Scottish Admiral Lord Thomas Cochrane was invaluable: with a very small Brazilian fleet he drove the Portuguese out of Brazilian waters with a combination of muscle and bluff. Pedro proved himself skillful in dealing with rebels and dissidents. By 1824 Brazil had its own constitution and its independence was recognized by the USA and Great Britain. On August 25, 1825, Portugal formally recognized Brazil’s independence: it helped that João was King of Portugal at the time. 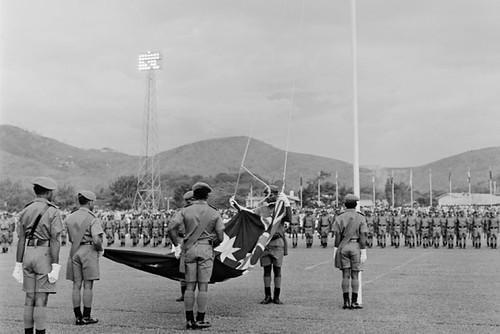 After the war, some Australian officials wanted a return to the prewar order, while others wanted to empower the local population in gratitude for their assistance in the fighting. At first the Highlanders were utilized as a massive new source of labour for the coastal plantations. From the 1950s the growing of Arabica coffee by local smallholders spread rapidly throughout much of the Highlands, providing another source of income and keeping the people there in their villages. Meanwhile, cacao was rapidly adopted as a plantation and smallholder crop in the islands and around Madang. Despite the general lack of economic development in Papua, the town of Port Moresby grew rapidly and attracted large numbers of migrants, particularly from the poorer areas and especially the Highlands.

In 1945 Australia combined its administration of Papua and that of the former mandate into the Territory of Papua and New Guinea, which it administered from Canberra via Port Moresby. From 1946 Australia managed the New Guinea (eastern) half as a United Nations trust territory. In the 1950s Australia took a gradualist approach to educating the population and improving health services, but from 1960 international pressure led Australia to expedite efforts to create an educated elite and improve social conditions, boost the economy, and develop political structures in preparation for decolonization. General elections for a House of Assembly were held in 1964, 1968, and 1972; self-government was achieved on December 1, 1973, and full independence from Australia on September 16, 1975. At that time Australian development assistance provided nearly half of the national budget.

Francis Walsingham gets a knighthood.

Sir Francis Walsingham was a government administrator in the reign of Elizabeth I. Walsingham is principally remembered for his part in the trial and execution of Mary, Queen of Scots. In 1562, aged about 30, Walsingham became a Member of Parliament for Lyme Regis. William Cecil, Lord Burghley, quickly recognised his talent and in 1568 Walsingham started to work for the most powerful non-royal in England. Walsingham was a talented linguist courtesy of the years he had spent in Europe. Cecil wanted Walsingham to use this ability to spy on foreigners in London who might present a threat to Elizabeth. Walsingham developed his own resources for this task and quickly had men working for him throughout the kingdom and in many of the major cities in Europe.

Between 1570 and 1573 he served in the French Court as ambassador. Walsingham’s main task in France was to arrange the marriage between Elizabeth and the Duke of Anjou the brother of the French king. His work was rewarded when he was appointed Secretary in 1573 and was knighted in December 01, 1577. As a Member of Parliament he was also in an excellent position to keep his political master informed as to what was going on in the Commons. As Cecil was in the Lords, this ensured both Houses in Parliament were covered.

Paul McCartney and Pete Best are arrested in Hamburg, Germany, after accusations of attempted arson.

The body of an unidentified man is found in Adelaide, Australia, involving an undetectable poison and a secret code in a very rare book.

Peter I is crowned Emperor of Brazil.