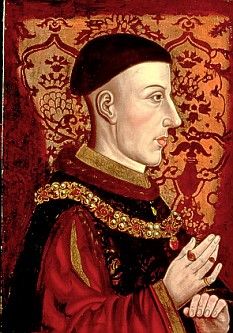 Henry V, 16 September 1386 – 31 August 1422, also called Henry of Monmouth, was King of England from 1413 until his early death in 1422. He was the second English monarch of the House of Lancaster. Despite his relatively short reign, Henry’s outstanding military successes in the Hundred Years’ War against France, most notably in his famous victory at the Battle of Agincourt in 1415, made England one of the strongest military powers in Europe. Immortalised in the plays of Shakespeare, Henry is known and celebrated as one of the great warrior kings of medieval England.

In his youth, during the reign of his father Henry IV, Henry gained military experience fighting the Welsh during the revolt of Owain Glynd?r and against the powerful aristocratic Percy family of Northumberland at the Battle of Shrewsbury. Henry acquired an increasing share in England’s government due to the king’s declining health, but disagreements between father and son led to political conflict between the two. After his father’s death in 1413, Henry assumed control of the country and asserted the pending English claim to the French throne.

In 1415, Henry embarked on war with France in the ongoing Hundred Years’ War between the two nations. His military successes culminated in his famous victory at the Battle of Agincourt and saw him come close to conquering France. Taking advantage of political divisions within France, he conquered large portions of the kingdom and Normandy was occupied by the English for the first time since 1345–1360. After months of negotiation with Charles VI of France, the Treaty of Troyes recognised Henry V as regent and heir apparent to the French throne and he was subsequently married to Charles’s daughter, Catherine of Valois.

Following this arrangement, everything seemed to point to the formation of a union between the kingdoms of France and England, in the person of King Henry. His sudden and unexpected death in France two years later condemned England to the long and difficult minority of his infant son and successor, who reigned as Henry VI in England and Henry II in France.

Henry was born in the tower above the gatehouse of Monmouth Castle in Wales, and for that reason was sometimes called Henry of Monmouth. He was the son of Henry of Bolingbroke and Mary de Bohun, and thus also the paternal grandson of the influential John of Gaunt, and great-grandson of Edward III of England. At the time of his birth, Richard II, his first cousin once removed, was king. Henry’s grandfather, John of Gaunt, was the king’s guardian. As he was not close to the line of succession to the throne, Henry’s date of birth was not officially documented; and for many years it was disputed whether he was born in 1386 or 1387. However, records indicate that his younger brother Thomas was born in the autumn of 1387 and that his parents were at Monmouth in 1386 but not in 1387. It is now accepted that he was born on 16 September 1386.

After Henry IV died on 20 March 1413, Henry V succeeded him and was crowned on 9 April 1413 at Westminster Abbey. The ceremony was marked by a terrible snowstorm, but the common people were undecided as to whether it was a good or bad omen. Henry was described as having been “very tall, slim, with dark hair cropped in a ring above the ears, and clean-shaven”. His complexion was ruddy, the face lean with a prominent and pointed nose. Depending on his mood, his eyes “flashed from the mildness of a dove’s to the brilliance of a lion’s”.