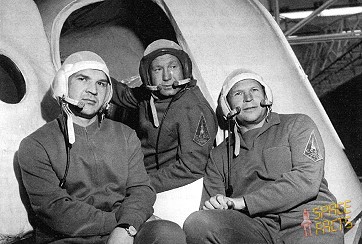 Soyuz 11 was the only manned mission to board the world’s first space station, Salyut 1 Soyuz 10 had soft-docked but had not been able to enter due to latching problems.The mission arrived at the space station on 7 June 1971 and departed on 30 June. The mission ended in disaster when the crew capsule depressurised during preparations for reentry, killing the three-man crew. The Soyuz 11 crew members were Georgy Dobrovolsky, Vladislav Volkov, and Viktor Patsayev.

The three crew members of Soyuz 11 are the only humans known to have died in space.The Soyuz 7K-OKS spacecraft was launched on 7 June 1971, from Baikonur Cosmodrome in central Kazakh SSR. Several months earlier, the first mission to the Salyut, Soyuz 10, had failed to successfully dock with the station. Soyuz 11 successfully docked with Salyut 1 on 7 June and the cosmonauts remained on board for 22 days, setting space endurance records that would hold until the American Skylab 2 mission in May–June 1973.

Upon first entering the station, the crew encountered a smoky and burnt atmosphere and after replacing part of the ventilation system spent the next day back in their Soyuz until the air cleared. Their stay in Salyut was productive, including live television broadcasts. A fire broke out on day 11 of their stay, causing mission planners to consider abandoning the station. The planned highlight of the mission was to have been the observation of an N1 rocket launch, but the launch was postponed. The crew also found that using the exercise treadmill as they were required to do twice a day caused the whole station to vibrate. Pravda released news of the mission and regular updates while it was in progress.