The Spanish Armada is first spotted off the coast of England. 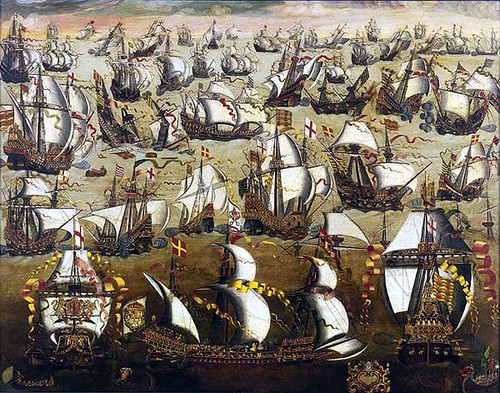 The Spanish Armada was a great Spanish fleet sent by King Philip II of Spain in 1588 to invade England. It was ironically called “Invincible.” During the late 1500’s, Spain was the major international power over much of the known world. Spain’s leader, King Philip II, wanted to conquer the Protestants from England and convert them to the Church of Rome. King Philip II also had hatred against Queen Elizabeth I, and wanted revenge because she had executed Mary Queen of Scotland in 1587.

King Philip II of Spain began the assembling and formation on the Spanish Armada. The Armada left Libson on the 20th of May 1588. The Armada consisted of about 130 ships. Mediterranean and Atlantic fleets had up to 8,000 sailors and around 19,000 soldiers. They joined another 30,000 soldiers from Spain totaling 50,000 men. The commanders of the fleet were Duke of Madina Sidonia, Francis Drake, Duck of Parma, an admiral named Don Alvaro de Bazon, and Marquis of Santa Cruz, who had organized the Armada . The English and Dutch knew that King Philip would attack, and sent small squadrons under Sir William Wynter and Lord Henry Seymour to patrol the Netherlands Coast.

The English sent 54 of the Queen’s best ships to Plymouth on the English Channel to Blockade and destroy the Armada before it left the Spanish Coast. On July 29, 1588, after the bad weather had passed, the Armada was spotted off the Sicily Isles near southwestern England.The battle between Spain and the English had begun when they first spotted each other. The two opposite sides first met off of Plymouth, near Eddystone Rocks on July 31, when three of the Spanish ships were lost. The larger part of the English fleet was at Plymouth. The English fleet harassed the Spanish fleet but were unable seriously damage the Spanish formation.

Famous Words of Inspiration...
"A popular Government without popular information or the means of acquiring it, is but a Prologue to a Farce or a Tragedy or perhaps both. Knowledge will forever govern ignorance, and a people who mean to be their own Governors, must arm themselves with the power knowledge gives."
James Madison
— Click here for more from James Madison