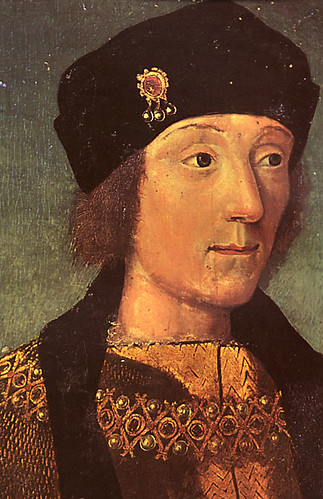 On this day in 1485, the founder of the Tudor dynasty, Henry Tudor, was crowned King Henry VII at Westminster Abbey. The Tudor chronicler, Raphael Holinshed, recorded:

“…with great pomp he rowed unto Westminster, & there the thirtieth day of October he was with all ceremonies accustomed, anointed, & crowned king, by the whole assent as well of the commons as of the nobility, & called Henrie the seventh of that name: which was in the year of the world 5452, and after the birth of our Lord 1485, in the forte and sixth year of Frederike the third then emperor of Almaine, Maximilian his son being newly elected king of the Romans, in the second year of Charles the eight then king of France, and in the fine and twentieth of king James then ruling the realm of Scotland.

His biographer, Thomas Penn, describes how this was the occasion that Henry was united with his mother, Lady Margaret Beaufort, whom he’d not seen for fourteen years. Margaret was said to have “wept marvelously”.

Henry was the first Tudor monarch and had claimed the crown of England after defeating Richard III at the Battle of Bosworth Field on the 22nd August 1485. He had actually been unofficially crowned with Richard’s crown on the battlefield that day.

On the 18th January 1486, Henry united the Houses of Lancaster and York by marrying Elizabeth of York, a move which strengthened his monarchy and his future offspring’ claims to the throne. Henry VII reigned until his death on 21st April 1509, when he was succeeded by his son Henry VIII.