The Democratic Republic of the Congo is renamed Zaire. 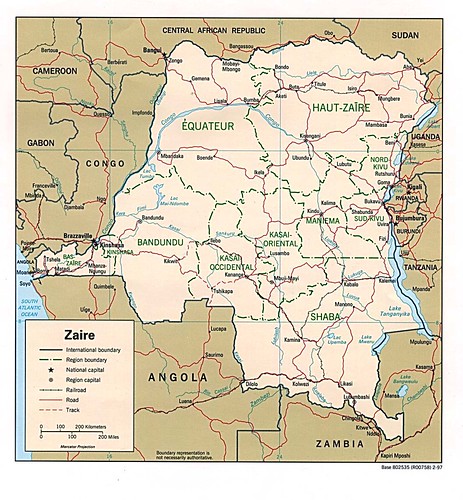 The Republic of Zaire was the name for the Democratic Republic of the Congo that existed between 1971 and 1997 in Central Africa. The country was a one-party dictatorship, run by Mobutu Sese Seko and his ruling Popular Movement of the Revolution party. Zaire was established following Mobutu’s seizure of power in a military coup in 1965, following five years of political upheaval following independence known as the Congo Crisis. Zaire had a strongly centralist constitution and foreign assets were nationalised. The period is sometimes referred to as the Second Congolese Republic.

A wider campaign of Authenticité, ridding the country of the influences from the colonial era of the Belgian Congo, was also launched under Mobutu’s direction. Weakened by the end of American support after the end of the Cold War, Mobutu was forced to declare a new republic in 1990 to cope with demands for change. By the time of its downfall, Mobutu’s rule was characterised by widespread cronyism, corruption and economic mismanagement.

Zaire collapsed in the 1990s, amid the destabilisation of the eastern parts of the state in the aftermath of the Rwandan Genocide and growing ethnic violence. In 1996, Laurent-Désiré Kabila, the head of the Alliance of Democratic Forces for the Liberation of Congo (AFDL) militia, led a popular rebellion against Mobutu. With rebel forces successfully making gains beyond the east, Mobutu fled the country, leaving Kabila’s forces in charge as the country restored its name to the Democratic Republic of the Congo the following year. Mobutu died within four months after he fled into exile in Morocco.