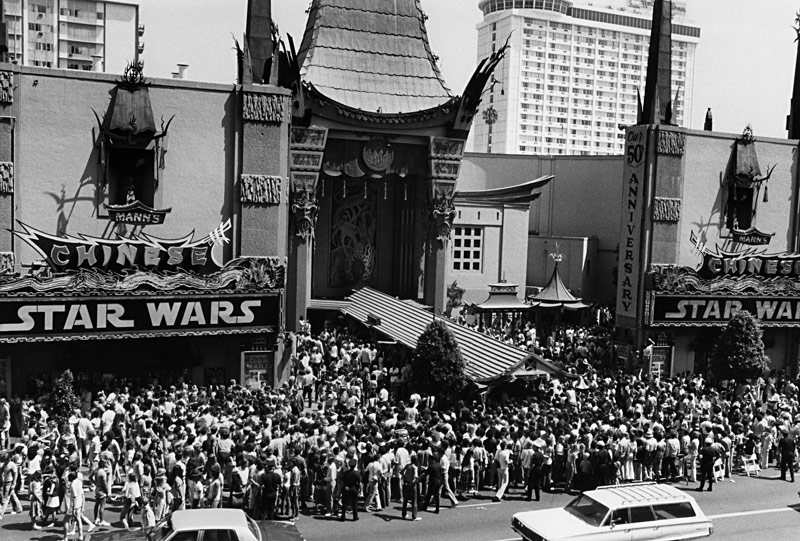 On this day in 1977, Memorial Day weekend opens with an intergalactic bang as the first of George Lucas’ blockbuster Star Wars movies hits American theaters.

The incredible success of Star Wars–it received seven Oscars, and earned $461 million in U.S. ticket sales and a gross of close to $800 million worldwide–began with an extensive, coordinated marketing push by Lucas and his studio, 20th Century Fox, months before the movie’s release date. “It wasn’t like a movie opening,” actress Carrie Fisher, who played rebel leader Princess Leia, later told Time magazine. “It was like an earthquake.” Beginning with–in Fisher’s words–“a new order of geeks, enthusiastic young people with sleeping bags,” the anticipation of a revolutionary movie-watching experience spread like wildfire, causing long lines in front of movie theaters across the country and around the world.

With its groundbreaking special effects, Star Wars leaped off screens and immersed audiences in “a galaxy far, far away.” By now everyone knows the story, which followed the baby-faced Luke Skywalker as he enlisted a team of allies–including hunky Han Solo and the robots C3PO and R2D2–on his mission to rescue the kidnapped Princess Leia from an Evil Empire governed by Darth Vader. The film made all three of its lead actors overnight stars, turning Fisher into an object of adoration for millions of young male fans and launching Ford’s now-legendary career as an action-hero heartthrob.

Famous Words of Inspiration...
"The baby rises to its feet, takes a step, is overcome with triumph and joy - and falls flat on its face. It is a pattern for all that is to come! But learn from the bewildered baby. Lurch to your feet again. You'll make the sofa in the end."
Pam Brown
— Click here for more from Pam Brown