The Apollo 12 command module splashes down in the Pacific Ocean, ending the second manned mission to land on the Moon. 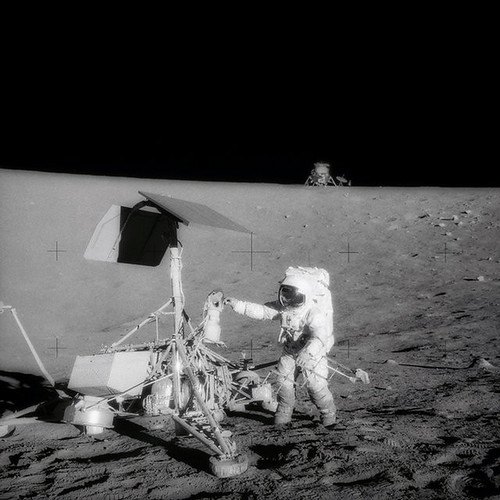 Apollo 12, the second manned lunar mission, took off for the moon on Nov. 14, 1969. The spacecraft’s target was the Ocean of Storms, and NASA scientists hoped it would land a little closer to bull’s-eye than the first mission got.

Apollo 11 was a great technological achievement, but it landed four miles from its target. NASA wanted a more pinpoint landing in future missions. Also, part of Apollo 12’s work would be to retrieve bits of Surveyor 3, another spacecraft that had landed on the moon in 1967. If the crew landed miles away, there was no hope of achieving that.
The Apollo 12 astronauts

The crew of Apollo 12 were seasoned astronauts and pilots, and were close friends.Pete Conrad, a wise-cracking gap-toothed commander, graduated from Princeton University and joined the Navy, where he became a flight instructor. He first flew in space on Gemini 5, which set an endurance record at the time and pushed the United States ahead of the Soviet Union in terms of accumulated hours in space.
Pete Conrad, Dick Gordon, and Al Bean pose during a visit to North American Rockwell Space Division, Downey, California for spacecraft checkout.

Lunar module pilot Alan Bean was a student of Conrad’s at the U.S. Naval Test Pilot School; in interviews with journalist Andrew Chaikin, the story was told that Bean was Conrad’s first pick for Apollo 12. However, Astronaut Office chief Deke Slayton voted the proposal down. C.C. Williams was chosen instead. Tragically, Williams died in a T-38 crash on Oct. 5, 1967. When Conrad approached Slayton again, Slayton agreed to bring Bean on board. Bean felt it was a rescue from his previous work at NASA, and an opportunity he would never forget.

The command module pilot for Apollo 12 was Richard “Dick” Gordon, who came to NASA after setting speed and distance records, and also doing flight testing for the Navy. His skill at the stick came in handy for the Gemini 11 mission, when he and Conrad piloted the docked spacecraft to 528 miles above Earth, an altitude record at the time.

Famous Words of Inspiration...
"Art can teach without at all ceasing to be art."
C.S. Lewis
— Click here for more from C.S. Lewis