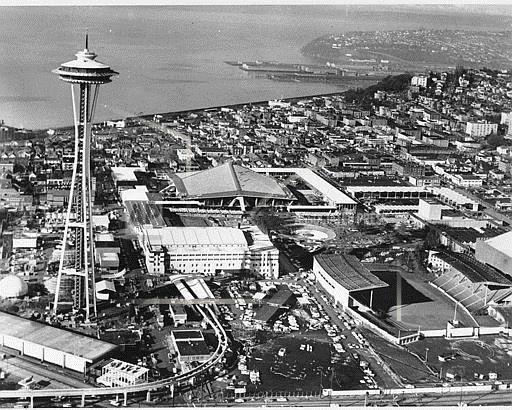 The Century 21 Exposition – also known as the Seattle World’s Fair – was held between April 21 and October 21, 1962 drew almost 10 million visitors. A defining moment in the history of Seattle, this fair began life as the brainchild of City Councilman Al Rochester. By 1955, the councilman had generated considerable interest in his idea from decision makers at the state and city level, and in January Washington’s legislature allocated $5,000 for a small commission to study the feasibility of such a fair. Public excitement, spurred on by effective advertisement, soon gave the project further momentum; in 1957 Seattle voters passed a $7.5 million Civic Center bond for possible fairground development, an amount which was then matched by the legislature.

By April 1962, all that remained to be done was to open the doors to the public, which occurred during an extravagant opening ceremony on the 21st. Amidst 538 clanging bells, 2000 balloons, and 10 Air Force F-102 fighters swooping overhead, Exposition president Joseph Gandy officially opened Century 21 for business. For the next six months, visitors would be entertained not just by the many exhibits, but also by an array of musicians, orchestras, dance troupes, art collections, singers, comedians, and other various shows traveling through the fair during its run. Adding to the star-studded atmosphere was the presence of the ‘King of Rock and Roll,’ Elvis Presley, who arrived to shoot a film, It Happened at the World’s Fair. Indeed, a number of celebrities came to the Exposition as tourists, including Vice-President Lyndon Johnson, Walt Disney, and Prince Phillip of Great Britain. By the close of the fair on October 21, a total of 9,609,969 people officially visited, largely satisfying attendance goals.