Richard I of England is invested as Duke of Normandy. 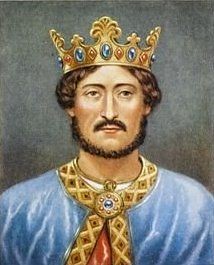 Richard I was King of England from 6 July 1189 until his death. He also ruled as Duke of Normandy, Aquitaine and Gascony, Lord of Cyprus, Count of Poitiers, Anjou, Maine, and Nantes, and Overlord of Brittany at various times during the same period. He was the third of five sons of King Henry II of England and Duchess Eleanor of Aquitaine. He was known as Richard Cœur de Lion or Richard the Lionheart because of his reputation as a great military leader and warrior. He was also known in Occitan as Oc e No, because of his reputation for terseness.

By the age of 16, Richard had taken command of his own army, putting down rebellions in Poitou against his father. Richard was a central Christian commander during the Third Crusade, leading the campaign after the departure of Philip II of France and scoring considerable victories against his Muslim counterpart, Saladin, although he did not retake Jerusalem from Saladin.

Richard spoke both French and Occitan. He was born in England, where he spent his childhood; before becoming king, however, he lived most of his adult life in the Duchy of Aquitaine, in the southwest of France. Following his accession, he spent very little time, perhaps as little as six months, in England. Most of his life as king was spent on Crusade, in captivity, or actively defending his lands in France. Rather than regarding his kingdom as a responsibility requiring his presence as ruler, he has been perceived as preferring to use it merely as a source of revenue to support his armies. Nevertheless, he was seen as a pious hero by his subjects. He remains one of the few kings of England remembered by his epithet, rather than regnal number, and is an enduring iconic figure both in England and in France.