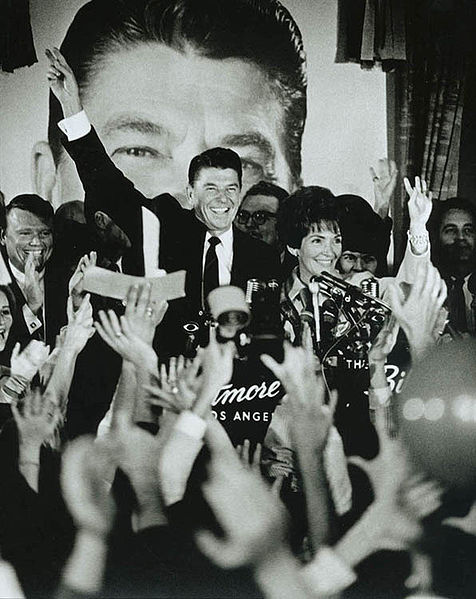 Ronald Reagan was the Governor of California for two terms, the first beginning in 1967 and the second in 1971. He left office in 1975, declining to run for a third term. Robert Finch, Edwin Reinecke, and John L. Harmer served as lieutenant governors over the course of his governorship.California Republicans were impressed with Reagan’s political views and charisma after his “A Time for Choosing” speech,and nominated him as the Republican party candidate for Governor in 1966.

Reagan’s campaign emphasized two main themes: “to send the welfare bums back to work”, and regarding burgeoning anti-war and anti-establishment student protests at UC Berkeley, “to clean up the mess at Berkeley”. He was elected, defeating two-term governor Edmund G. “Pat” Brown by nearly a million votes, and was sworn in on January 2, 1967 at ten minutes past midnight.In 1988, Reagan explained that this time was chosen because his predecessor, Governor Brown, “had been filling up the ranks of appointments and judges” in the days before his term ended. Professor Marcello Truzzi, a sociologist at Eastern Michigan University who studied the Reagans’ interest in astrology, regarded this explanation as “preposterous”, as the decision to be sworn in at that odd time of day was made six weeks earlier, and was based on advice from Reagan’s long-time friend, the astrologer Carroll Righter.

Reagan was elected to his first term as Governor of California on November 8, 1966 with 57.65% of the vote.