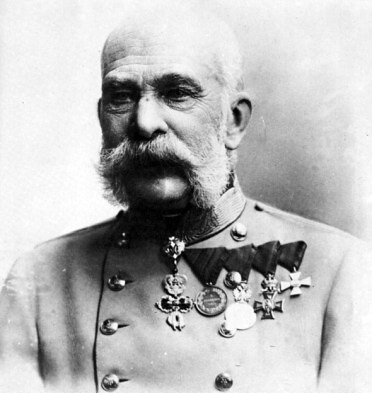 The third longest reigning European monarch 67 years after King Louis XIV of France and Johann II, Prince of Liechtenstein, Franz Joseph Karl was born on August 18, 1830 at Schönbrunn Palace in Vienna, Austria. He was the eldest of the four children of Archduke Franz Karl of Austria and Princess Sophia of Bavaria.

Franz Joseph was educated with his brother Maximilian, and they were first taught by their governess Baroness Louise von Sturmfeder. In 1836, Count Heinrich Bombelles became responsible for the education of the young archdukes. Bombelles created a rigorous course of study for Franz Joseph. He was expected to study 18 hours a week when he was six years old. The hours of study per week increased to 36 hours at age eight and 46 hours at age 11. Franz Joseph became seriously ill at the age of 13 due to the stress of his studies. However, his rigorous education continued and he was studying 56 hours a week at the 15. It was important for Franz Joseph to learn the languages of the Austrian empire, and so he studied not only French, Latin and Greek , but also Hungarian, Czech, Italian, and Polish. His studies mathematics, physics, history, geography, jurisprudence and political science, and physical education. On his 13th birthday, Franz Joseph was appointed Colonel of the Dragoons Regiment, and the focus of his education shifted to military strategies and tactics.