SALT (Strategic Arms Limitation Talks) II is signed by the United States and the Soviet Union. 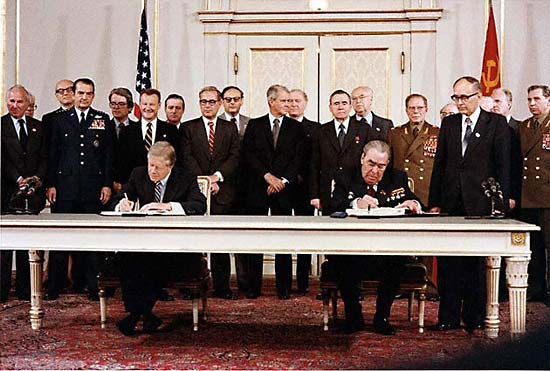 Strategic Arms Limitation Talks, negotiations between the United States and the Soviet Union that were aimed at curtailing the manufacture of strategic missiles capable of carrying nuclear weapons. The first agreements, known as SALT I and SALT II, were signed by the United States and the Union of Soviet Socialist Republics in 1972 and 1979, respectively, and were intended to restrain the arms race in strategic ballistic missiles armed with nuclear weapons. First suggested by U.S. President Lyndon B. Johnson in 1967, strategic arms limitation talks were agreed on by the two superpowers in the summer of 1968, and full-scale negotiations began in November 1969.

Of the resulting complex of agreements, the most important were the Treaty on Anti-Ballistic Missile Systems and the Interim Agreement and Protocol on Limitation of Strategic Offensive Weapons. Both were signed by President Richard M. Nixon for the United States and Leonid Brezhnev, general secretary of the Soviet Communist Party, for the U.S.S.R. on May 26, 1972, at a summit meeting in Moscow.

The ABM treaty regulated antiballistic missiles that could theoretically be used to destroy incoming intercontinental ballistic missiles launched by the other superpower. The treaty limited each side to only one ABM deployment areae and 100 interceptor missiles. These limitations prevented either party from defending more than a small fraction of its entire territory, and thus kept both sides subject to the deterrent effect of the other’s strategic forces. The ABM treaty was ratified by the U.S. Senate on Aug. 3, 1972. The Interim Agreement froze each side’s number of ICBMs and submarine-launched ballistic missiles at current levels for five years, pending negotiation of a more detailed SALT II. As an executive agreement, it did not require U.S. Senate ratification, but it was approved by Congress in a joint resolution.

The SALT II negotiations opened late in 1972 and continued for seven years. A basic problem in these negotiations was the asymmetry between the strategic forces of the two countries, the U.S.S.R. having concentrated on missiles with large warheads while the United States had developed smaller missiles of greater accuracy. Questions also arose as to new technologies under development, matters of definition, and methods of verification.

As finally negotiated, the SALT II treaty set limits on the number of strategic launchers i.e., missiles that can be equipped with multiple independently targetable reentry vehicles, with the object of deferring the time when both sides’ land-based ICBM systems would become vulnerable to attack from such missiles. Limits were put on the number of MIRVed ICBMs, MIRVed SLBMs, heavy bombers, and the total number of strategic launchers. The treaty set an overall limit of about 2,400 of all such weapons systems for each side. The SALT II treaty was signed by President Jimmy Carter and Brezhnev in Vienna on June 18, 1979, and was submitted to the U.S. Senate for ratification shortly thereafter. But renewed tensions between the superpowers prompted Carter to remove the treaty from Senate consideration in January 1980, after the Soviet Union’s invasion of Afghanistan. The United States and the Soviet Union voluntarily observed the arms limits agreed upon in SALT II in subsequent years, however. Meanwhile, the renewed negotiations that opened between the two superpowers in Geneva in 1982 took the name of Strategic Arms Reduction Talks or START.

Share on Facebook Share
Share on TwitterTweet
Share on LinkedIn Share
Famous Words of Inspiration...
"I hope that when you are my age, you will be able to say as I have been able to say: We lived in freedom. We lived lives that were a statement, not an apology."
Ronald Reagan
— Click here for more from Ronald Reagan