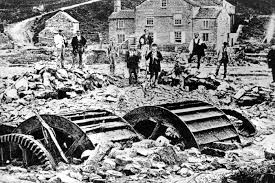 Between 1859 and 1864, work continued on the dam, and by late February 1864, only a few finishing touches were required to complete the embankment. The reservoir was now almost full – the water level being just a few feet below the overflow weir. On Friday the 11th. March 1864, at around 5.30 p.m., a local workman, William Horsefield, whose place of employment was close to the dam, was crossing the embankment on his way home after finishing work. The weather was quite stormy, as it had been for most of the day, so he crossed a little way down the embankment slope to avoid the heavy winds, and the spray that was being whipped over the top of the dam. A little way along, he noticed a crack running across the embankment. The ‘crack’ was only wide enough to enter one’s fingers, but it was of such a length to cause him some alarm. He immediately scurried off to inform some of his work colleagues – who were not yet quite out of sight; and ultimately, the Waterworks’ chief engineer, John Gunson, was sent for. Gunson, who lived next door to the Waterworks’ offices in Division Street, near Sheffield centre, some eight miles away, collected one of his contractors, John Craven, who lived nearby, and the two mounted the gig that was to carry them through the abysmal weather to the Dale Dyke reservoir.

It was around 10 p.m. when they eventually arrived at the dam. After an initial inspection, Gunson concluded that the crevice was merely a surface crack – probably brought about by frost damage, or slight settlement of the new embankment; but to be on the safe side he decided to lower the water in the reservoir until such time as a more extensive investigation could be carried out. He discovered that the navvies had already opened the drain valves in an attempt to achieve this, but it was evident that this method would take several days to lower the water to a ‘safe’ level, so he instructed them to place some gunpowder, and blow a hole in the side of the by-wash, thus quickly draining off a large amount of water. Several attempts with the gunpowder were made, but the rain and persistent spray thrown up by the increasing winds prevented its ignition. The time reached 11.30 p.m. and water was being liberally blown over the top of the dam. Gunson made his way back across the embankment to inspect the crack once more – it did not appear to have worsened, but as he glanced up to the top of the dam he was shocked to see ‘water running over like a white sheet in the darkness’. He later declared that it went ‘right under my feet and dropped down the crack’. He edged his way down to the valve house, located near the bottom of the embankment, to see if he could get some idea of the quantity of water passing over, which initially was ‘no great current’. As he arrived, one of his colleagues, suspecting something was seriously wrong, called down to him to ‘get out of the way’. Gunson looked up to see a breach appearing in the top of the dam. Feeling a sudden, violent, vibrating of the ground beneath his feet, he quickly scampered up the side of the embankment, luckily just in time, as a few seconds later there was a total collapse of a large section of the dam, unleashing a colossal mountain of water which thundered down the valley and on to the unsuspecting population below. For two hundred and fifty people who lived in Sheffield and the hamlets in the valley below the dam, this was to be their last night on Earth. Six hundred and fifty million gallons of water roared down the Loxley valley and into Sheffield, wreaking death and destruction on a horrific scale.

‘Individual experiences were infinitely tragic, pathetic, and sometimes bizarre. The first to drown was a two-day-old baby boy, the oldest a woman of eighty-seven. Whole families were wiped out; one desperate man, trapped upstairs in a terrace house, battered his way through five party walls to safety collecting thirty-four other people as he went; a would be suicide, locked in a cell, decided, as the flood poured in, that he no longer wished to die; one poor old man drowned alongside his sleeping companion – a donkey; a husband put his wife and five children on a bed on which they floated until the water went down.’

Famous Words of Inspiration...
"He that is down needs fear no fall."
John Bunyan
— Click here for more from John Bunyan