A military coup brings Muammar Gaddafi to power in Libya. 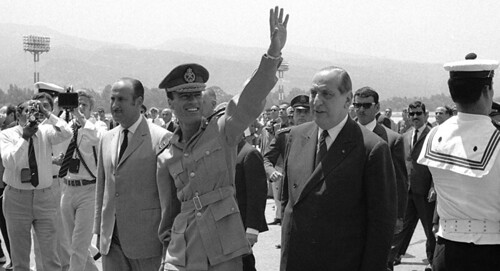 Qaddafi was born in a tent in the Libyan desert in 1942, the son of a Bedouin farmer. A gifted student, he graduated from the University of Libya in 1963 and the Libyan military academy at Banghazi in 1965. An ardent Arab nationalist, he plotted with a group of fellow officers to overthrow King Idris, who was viewed as overly conservative and indifferent to the movement for greater political unity among Arab countries. By the time Qaddafi attained the rank of captain, in 1969, the revolutionaries were ready to strike. They waited until King Idris was out of the country, being treated for a leg ailment at a Turkish spa, and then toppled his government in a bloodless coup. The monarchy was abolished, and Idris traveled from Turkey to Greece before finding asylum in Egypt. He died there in Cairo in 1983.

Blending Islamic orthodoxy, revolutionary socialism, and Arab nationalism, Qaddafi established a fervently anti-Western dictatorship in Libya. In 1970, he removed U.S. and British military bases and expelled Italian and Jewish Libyans. In 1973, he took control of foreign-owned oil fields. He reinstated traditional Islamic laws, such as prohibition of alcoholic beverages and gambling, but liberated women and launched social programs that improved the standard of living in Libya. As part of his stated ambition to unite the Arab world, he sought closer relations with his Arab neighbors, especially Egypt. However, when Egypt and then other Arab nations began a peace process with Israel, Libya became increasingly isolated.

Qaddafi’s government financed a wide variety of terrorist groups worldwide, from Palestinian guerrillas and Philippine Muslim rebels to the Irish Republican Army. During the 1980s, the West blamed him for numerous terrorist attacks in Europe, and in April 1986 U.S. war planes bombed Tripoli in retaliation for a bombing of a West German dance hall. Qaddafi was reportedly injured and his infant daughter killed in the U.S. attack.

In the late 1990s, Qaddafi sought to lead Libya out of its long international isolation by turning over to the West two suspects wanted for the 1988 explosion of an airliner over Lockerbie, Scotland. In response, the United Nations lifted sanctions against Libya. The United States removed its own embargo in September 2004. After years of rejection in the Arab world, Qaddafi also sought to forge stronger relations with non-Islamic African nations such as South Africa, remodeling himself as an elder African statesman.

In February 2011, as unrest spread through much of the Arab world, massive political protests against the Qaddafi regime sparked a civil war between revolutionaries and loyalists. In March, an international coalition began conducting airstrikes against Qaddafi strongholds under the auspices of a U.N. Security Council resolution. On October 20, Libya’s interim government announced that Qaddafi had died after being captured near his hometown of Sirte.