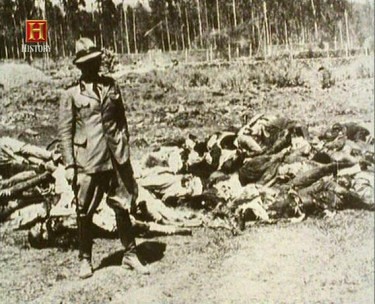 On that day in 1944, four columns of Hitler’s crack 16th SS Panzer Grenadier Division, noted for their ideological fervour, made the grinding journey up to Sant ‘Anna from the plains. Rome had been liberated two months before; slowly and expensively the British and the Americans were forcing the Germans back up the Italian peninsula, down which they had come roaring earlier that year after Mussolini was sacked by the Italian king and Italy switched to the Allied side.

In August 1944 the Nazis were defending the “Gothic Line” which ran from north of Viareggio on the Ligurian coast to the peaks of the Appenines. But they were fighting on another front, too, because on the fall of Mussolini, groups of anti-Nazi Partisans sprang up in towns and villages across northern Italy, waging guerrilla war on the Nazis from strongholds in the hills.

As four companies of the SS came up the hills before dawn, Sant’Anna slept the sleep of the innocent and the relatively secure. With war now raging up and down the Gothic Line, and thousands of Nazi troops encamped in the nearest town, Santa Pietra, terrorised civilians had fled for the hills in large numbers. “Men fled from the town because the Nazis were rounding them up for forced labour, either in Italy or in Germany,” says Enio Mancini, curator of Sant’Anna’s Historical Museum of the Resistance.

“Additionally the Allies had started bombarding the German frontline. So whole families fled from the towns and about 1,000 refugees arrived in Sant’Anna. They came because it was so isolated, there was no motorable road in those days so it seemed safe. There were families from the surrounding area but also from as far away as Genoa and Naples.”