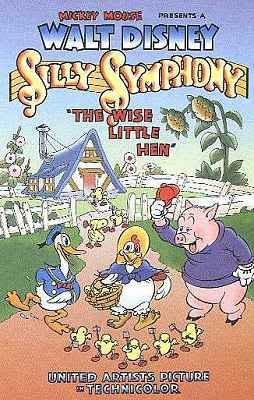 The Wise Little Hen is a Walt Disney’s Silly Symphonies cartoon, based on the fairy tale The Little Red Hen. This cartoon marked the debut of Donald Duck, dancing to the Sailor’s Hornpipe. Donald and his friend Peter Pig try to avoid work by faking stomach aches until Mrs. Hen teaches them the value of labor. This cartoon was released on June 9, 1934. It was animated by Art Babbitt, Dick Huemer, Clyde Geronimi, Louie Schmitt, and Frenchy de Tremaudan with assistance from a group of junior animators headed by Ben Sharpsteen and directed by Wilfred Jackson. It was also adapted as a Sunday comic strip by Ted Osborne and Al Taliaferro.

The Wise Little Hen of the title is looking for someone to help her plant her corn. Peter Pig and Donald Duck both feign belly aches to get out of the chore since they would rather play than work. So, with help from her chicks, she plants it herself. Harvest time comes; again, Peter and Donald claim belly aches, but the hen sees through this when boards of their clubhouse fall off showing their little act when they shake hands with each other for getting out of doing work. She cooks up a variety of corn dishes, and heads over to Peter and Donald to help her eat them, but before she can open her mouth, they already fake their belly aches. Once she asks, they are miraculously “cured” but all she gives them is castor oil, to teach them a lesson. As the hen and her chicks eat the corn themselves, Peter and Donald, with nothing but an appetite, repent with all their might by kicking each other on the rear.