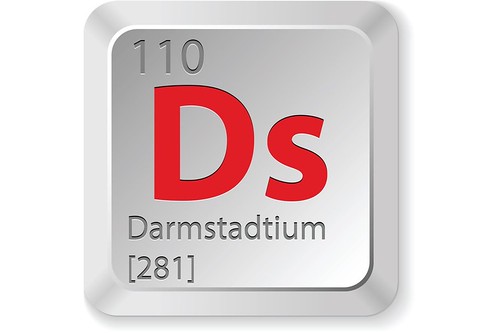 Darmstadtium was discovered by S. Hofmann, V. Ninov, F. P. Hessberger, P. Armbruster, H. Folger, G. Münzenberg, H. J. Schött, and others in 1994 at Gesellschaft für Schwerionenforschung in Darmstadt, Germany.The name darmstadtium lies within the long established tradition of naming an element after the place of its discovery, Darmstadt, in Germany.

On the 9th of November 1994,the first atom of element 110, darmstadtium, was detected at the Gesellschaft für Schwerionenforschung in Darmstadt, Germany. The isotope discovered has an atomic number of 269 that is 269 times heavier than hydrogen.The new element was produced by fusing a nickel and a lead atom together. This was achieved by accelerating the nickel atoms to a high energy in the heavy ion accelerator UNILAC at GSI. Over a period of many days, many billion billion nickel atoms were fired at a lead target in order to produce and identify a single atom of darmstadtium.