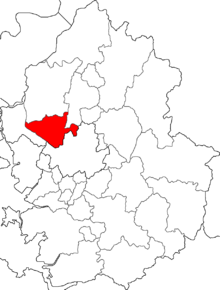 The Goyang Geumjeong Cave massacre (Korean: 고양 금정굴 민간인 학살[1][4] Hanja: 高陽衿井窟民間人虐殺[1][4] Goyang Geunjeong Cave civilian massacre[1][4]) was a massacre of over 153 unarmed civilians conducted between 9 October 1950 and 31 October 1950 by police in Goyang, Gyeonggi-do district of South Korea.[1][4][5] After the victory of the Second Battle of Seoul, South Korean authorities arrested and summarily executed several individuals along with their families on suspicion of sympathizing with North Korea.[4] The killings in Goyang coincided with the Namyangju Massacre in nearby Namyangju.[6]

On November 28, 2011, the Seoul central court ordered the South Korean government to apologize, pay reparations and fund a memorial to the victims' families.[1]

The capital of Tasmania, Hobart, is founded.

Hobart was established in 1804 at the mouth of the Derwent River, a year after Tasmania’s first settlement at nearby Risdon Cove. Only a collection of tents and huts then, its population consisted of 178 convicts, 25 Royal Navy marines, 15 women, 21 children, 13 free settlers, and 10 civil officers.

Hobart is Australia’s second oldest city and has an incredible waterfront location. From Old Wharf, where the first arrivals settled, round to the fishing village of Battery Point, the area known as Sullivan’s Cove is still the hub of this cosmopolitan city.

The Tasmanian Museum and Art Gallery was built in 1863 and designed by the city’s best known colonial architect, Henry Hunter. The gallery now houses an excellent collection of early prints and paintings of Tasmania, Aboriginal artifacts, as well as botanical displays of native flora. The Criminal Courts and Penitentiary Chapel showcases underground passages, solitary confinement cells, and an execution yard.

Battery Point is a maritime village located near the early settlement and wharves. A site with narrow gas-lit streets lined with tiny fishermen’s and worker’s houses, cottage gardens, colonial mansions and pubs, this village is a reflection of early colonial days. The strategic site, with its views down to the Derwent River, was originally home to a gun battery, which was positioned to ward off potential enemy invasions. The old guardhouse, built in 1818, is just a few minutes walk from Hampden road and has a range of antique shops, art galleries, tearooms, and restaurants.

Salamanca Place was once the site of early colonial industries ranging from jam making to metal foundry. Today, the beautiful row of sandstone warehouses is now the heart of Hobart’s lively art and creative centre. There is a range of art and craft galleries, antique furniture stores, and antiquarian bookshops housed in these old buildings. This place is also famous for its Saturday morning market and the Salamanca Market, where many stalls filled with arts, crafts, and fresh food are displayed.

Click here to view the map by A Mault showing the features of the original settlement with modern streets overlaid.

It is taken from a survey by Surveyor-General Harris. The original was discovered in the NSW Lands Office and presented to the Tasmanian Lands Office.

Hobart, capital of Tasmania, is founded.

Hobart is the capital and most populous city of the Australian island state of Tasmania. With a population of approximately 225,000, it is the second least populated Australian capital city. Founded in 1804 as a penal colony, Hobart is Australia’s second oldest capital city after Sydney, New South Wales. The modern history of Hobart dates to its foundation as a British colony in 1804. Prior to British settlement, the area had been occupied for possibly as long as 35,000 years, by the semi-nomadic Mouheneener tribe, a sub-group of the Nuennone, or South-East tribe.The descendants of the indigenous Tasmanians now refer to themselves as ‘Palawa’.

Since its foundation as a colonial outpost, the city has grown from the mouth of Sullivans Cove to stretch in a generally north-south direction along both banks of the Derwent River, from 22 km inland from the estuary at Storm Bay to the point where the river reverts to fresh water at Bridgewater.

Hobart has experienced both booms and busts over its history. The early 20th century saw a period of growth on the back of mining, agriculture and other primary industries, and the loss of men who served in world wars was counteracted by an influx of immigration after World War II.In the later years of the 20th century, migrants increasingly arrived to settle in Hobart from Asia. Despite the rise in migration from parts of the world other than the United Kingdom and Ireland, the population of Hobart remains predominantly ethnically Anglo-Celtic and has the highest percentage per capita of Australian-born residents among the Australian capital cities.

Hobart, capital of Tasmania in Australia, is founded.

The Cincinnati Reds win the World Series, but there is a scandal.