The Jerusalem Law began as a private member's bill proposed by Geulah Cohen, whose original text stated that "the integrity and unity of greater Jerusalem (Yerushalayim rabati) in its boundaries after the Six-Day War shall not be violated." However, this clause was dropped after the first reading in the Knesset. As the Knesset thus declined to specify boundaries and did not use the words "annexation" or "sovereignty", Ian Lustick writes that "The consensus of legal scholars is that this action added nothing to the legal or administrative circumstance of the city, although, especially at the time, its passage was considered to have political importance and sparked a vigorous protest reaction from the world community." [2] For example, United Nations Security Council Resolution 478,[3] adopted on 20 August 1980 by 14 votes to none, with 1 abstention (United States), declared soon after that the law was "null and void" and "must be rescinded". This resolution called upon member states to withdraw their diplomatic missions from the city. However, thirty-eight years later the United States relocated their Israeli embassy from Tel Aviv to Jerusalem on May 14, 2018 and other countries, including Paraguay and the Czech Republic expressed similar intentions.

Although the law was not proposed by the governing coalition or Prime Minister Menachem Begin, rather, it was proposed by lawmakers concerned that peace negotiators were demanding that Arab residents of East Jerusalem be given votes in Palestinian Authority elections.[4] As legislation, the Act is regarded as largely symbolic.[5]

An amendment in 2000 further specified the jurisdiction of the law, that included East Jerusalem. It actually did not change its range. The amendment also prohibited transfer of authority to a foreign body, for example an international regime.

Text of the Law

1. Jerusalem, complete and united, is the capital of Israel.

Seat of the President, the Knesset, the Government and the Supreme Court:

2. Jerusalem is the seat of the President of the State, the Knesset, the Government and the Supreme Court.

3. The Holy Places shall be protected from desecration and any other violation and from anything likely to violate the freedom of access of the members of the different religions to the places sacred to them or their feelings towards those places.

4. (a) The Government shall provide for the development and prosperity of Jerusalem and the well-being of its inhabitants by allocating special funds, including a special annual grant to the Municipality of Jerusalem (Capital City Grant) with the approval of the Finance Committee of the Knesset. (b) Jerusalem shall be given special priority in the activities of the authorities of the State so as to further its development in economic and other matters. (c) The Government shall set up a special body or special bodies for the implementation of this section.

Area of the jurisdiction of Jerusalem

5. The jurisdiction of Jerusalem includes, as pertaining to this basic law, among others, all of the area that is described in the appendix of the proclamation expanding the borders of municipal Jerusalem beginning the 20th of Sivan 5727 (June 28, 1967), as was given according to the Cities' Ordinance.

Prohibition of the transfer of authority

6. No authority that is stipulated in the law of the State of Israel or of the Jerusalem Municipality may be transferred either permanently or for an allotted period of time to a foreign body, whether political, governmental or to any other similar type of foreign body.

7. Clauses 5 and 6 shall not be modified except by a Basic Law passed by a majority of the members of the Knesset.

Yitzchak Navon President of the State" 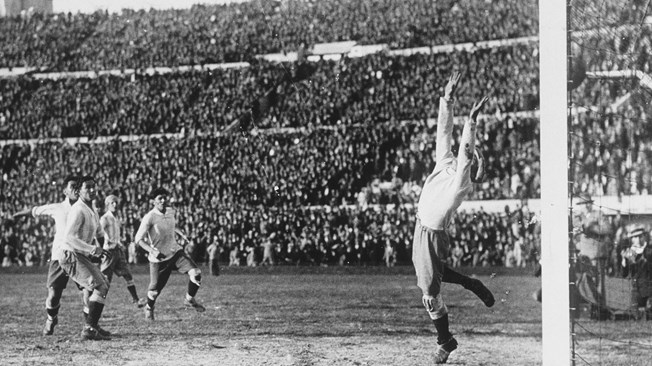 The final was played at the Estadio Centenario in Montevideo, Uruguay, on 30 July, a Wednesday. Up to date, it is, along with the 1966 FIFA World Cup Final, the only World Cup Final not to be played on a Sunday the latter being played on a Saturday. This World Cup Final is also the only one not to be played on a weekend. The stadium gates were opened at eight o’clock, six hours before kick-off, and at noon the ground was full, officially holding 93,000 people. A disagreement overshadowed the build-up to the match as the teams disagreed on who should provide the match ball, forcing FIFA to intervene and decree that the Argentine team would provide the ball for the first half and the Uruguayans would provide one for the second. The game ended 4–2 to Uruguay after they trailed 2–1 at half-time, adding the title of World Cup winners to their status as Olympic champions. Jules Rimet, president of FIFA, presented the Uruguayan team with the World Cup Trophy, which was later named after him. The following day was declared a national holiday in Uruguay; in the Argentinian capital Buenos Aires a mob threw stones at the Uruguayan consulate.

The last living player from that final, Francisco Varallo who played as a striker for Argentina, died on 30 August 2010.

After 12 minutes, Pablo Dorado put the hosts into the lead, before Argentine winger Carlos Peucelle equalised 8 minutes later, beating goalkeeper Enrique Ballestrero with a powerful shot. In the 37th minute, tournament top scorer Guillermo Stábile gave Argentina a 2–1 lead going into the break. Uruguay leveled the score 12 minutes into the second half via a goal from Pedro Cea, before Santos Iriarte restored the lead for the hosts in the 68th minute. With a minute left, Héctor Castro put Uruguay up 4–2, sealing the victory for Uruguay in the inaugural World Cup.

The first Masonic Grand Lodge in what is to become the United States is established in Massachusetts.

The first Masonic Grand Lodge is opened in Massachusetts.

The steamboat Brother Jonathan sinks off the coast of California, killing 225 passengers.

A Japanese Air Force F-86 and All Nippon Airways Boeing 727 and  collide in Japan killing all 162.