During the UEFA Cup match between FC Spartak Moscow and HFC Haarlem, 66 people are crushed to death in the Luzhniki disaster.

“The Jakarta Incident”: British Airways Flight 9 flies into a cloud of volcanic ash thrown up by the eruption of Mount Galunggung, resulting in the failure of all four engines.

Hama massacre: The government of Syria attacks the town of Hama.

The Salang Tunnel fire in Afghanistan kills up to 2,000 people.
[rdp-wiki-embed url=’https://en.wikipedia.org/wiki/Salang_Tunnel_fire’]

Poland bans Solidarity and all other trade unions. 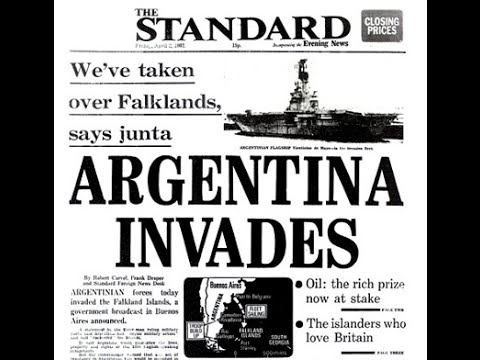 The Falkland Islands were first settled by the French – in 1764 Louis Antoine de Bougainville established a settlement there. The British turned up some time later, but left in 1774. They did leave a note saying not to touch them, however, because they belonged to King George.

By the time the British did return in 1833, Argentina had claimed the islands, and had stationed a garrison there to back this up. But they were booted out, and the islands have been in British hands ever since.

In the 1980s, Argentina was having a few political and economic problems. The 1976 coup had left a military junta in charge. But by the early ’80s, it was becoming increasingly unpopular, with a collapsing economy, rampant inflation, and government death squads ‘disappearing’ thousands of political opponents.

To divert the public’s attention from all the unpleasantness, General Leopoldo Galtieri decided to whip up a bit of nationalistic fervour by reclaiming the ‘Malvinas’ for the motherland.

And so, on 2 April 1982, 3,000 Argentinian troops landed, quickly put an end to the resistance of the 80 or so Royal Marines, and raised the Argentinian flag over Government House.

But if Argentina thought Britain would just give up their remote windswept possession 8,000 miles away, they were wrong. Mrs Thatcher, her own popularity waning, decided to fight back.

A naval task force was dispatched within days. Vulcan bombers flew raids from Ascension Island, 4,000 miles away, in an attempt to put the Port Stanley airport out of action. Harrier jump jets played a starring role. Foreign correspondents made their names.

The bitter war lasted just ten weeks. By 14 June, it was all over. Britain had retaken the islands. Over 900 people were dead.