The Teton Dam in the Fremont and Madison counties in Idaho, United States, collapses.

Teton Dam, a 305-foot high earthfill dam across the Teton River in Madison County, southeast Idaho, failed completely and released the contents of its reservoir at 11:57 AM on June 5, 1976. Failure was initiated by a large leak near the right (northwest) abutment of the dam, about 130 feet below the crest. The dam, designed by the U.S. Bureau of Reclamation, failed just as it was being completed and filled for the first time.

Between 9:30 and 10 AM, a wet spot developed on the downstream face of the dam, 15 to 20 feet out from the right abutment at about the same elevation as the seepage coming from the right abutment rock. This wet spot developed rapidly into seepage, and material soon began to slough, and erosion proceeded back into the dam embankment. The water quantity increased continually as the hole grew. Efforts to fill the increasing hole in the embankment were futile during the following 2 to 2 1/2 hour period until failure. The sheriff of Fremont County (St. Anthony, Idaho) said that his office was officially warned of the pending collapse of the dam at 10:43 AM on June 5. The sheriff of Madison County, Rexburg, Idaho, was not notified until 10:50 AM on June 5. He said that he did not immediately accept the warning as valid but concluded that while the matter was not too serious, he should begin telephoning people he knew who lived in the potential flood path.

The dam breached at 11:57 AM when the crest of the embankment fell into the enlarging hole and a wall of water surged through the opening. By 8 PM the flow of water through the breach had nearly stabilized. Downstream the channel was filled at least to a depth of 30 feet for a long distance. About 40 percent of the dam embankment was lost, and the powerhouse and warehouse structure were submerged completely in debris.

The Sex Pistols release “Anarchy in the U.K.”, heralding the arrival of punk rock in the UK. 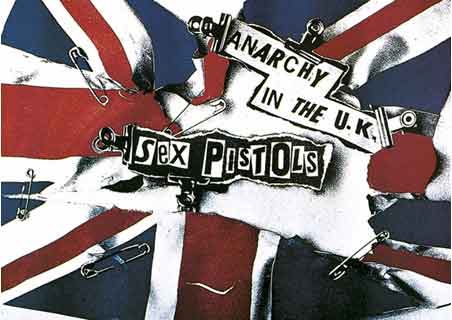 By late 1976, bands such as Television and the Ramones in New York City, and the Sex Pistols. They were recognized as the vanguard of a new musical movement. The following year saw punk rock spreading around the world, and it became a major cultural phenomenon in the United Kingdom. One of the most iconic singles in the history of punk music was released and the Sex Pistols were launched on a trajectory towards equal measures of fame and notoriety.Anarchy in the UK may have only edged into the Top 40, reaching the not-so-heady heights of 38, but its cultural impact still reverberates.It was the musical detonation of frustration at the status quo. It wasn’t the articulation of a manifesto for a new economics but a wrecking ball of a song that these musicians aimed straight at the establishment. This spectacle of rebellion shocked Britain but four decades on the Sex Pistols back catalogue could provide the soundtrack for a new season of revolt.

Over 3000 Palestinians are killed in the Tel al-Zaatar massacre during the Lebanese Civil War.

A new rollercoaster, The New Revolution, the first steel coaster that has a vertical loop, opens at Six Flags Magic Mountain in Valencia, California.

A swine flu outbreak begins at Fort Dix in NJ.

The Apple I computer is created.

An earthquake in Guatemala and Honduras kills more than 22000 people.

The Executive Order, which led to the relocation of Japanese Americans to internment camps, is rescinded by President Gerald R. Ford.

The Çald?ran-Muradiye earthquake in eastern Turkey kills over 4000 people.

Nadia Comaneci is the first athlete in Olympic Games history to score a perfect 10 in gymnastics at the 1976 Montreal Summer Olympics.