The Lincoln Tunnel opens to traffic in New York City

JRR Tolkien’s The Hobbit is published.

On Sept. 21, 1937, Tolkien’s novel first hit booksellers’ shelves, eventually becoming one of the most popular literary works of all time. J.R.R. Tolkien, an English professor at the University of Leeds, was grading test papers during the summer of 1928 when he scribbled the words, “In a hole in the ground there lived a hobbit” on a student’s blank answer sheet.

“His effort to discover just what hobbits were and what they were like led him to write one of the most beloved books ever written, The Hobbit, an introduction to the world of Middle-earth,” says the Houghton Mifflin Company.

Tolkien worked on “The Hobbit” on and off through the early 1930s, sharing the manuscript with friends, including author C.S. Lewis. A friend of a student convinced the George Allen & Unwin publishing house to look at the book. Sir Stanley Unwin, the company chairman, gave the manuscript to his 10-year-old son to review in 1936.

“Bilbo Baggins was a hobbit who lived in his hobbit-hole and never went for adventures, at last Gandalf the wizard and his dwarves persuaded him to go,” wrote young Raynor Unwin. “He had a very exciting time fighting goblins and wargs. At last they got to the lonely mountain: Smaug, the dragon who guards it is killed and after a terrific battle with the goblins he returned home—rich! This book, with the help of maps, does not need any illustrations. It is good and should appeal to all children between the ages of 5 and 9.”

The review convinced Stanley Unwin to publish the book. The first copies of “The Hobbit,” subtitled “There and Back Again,” appeared in English bookstores on Sept. 21, 1937. With its illustrations and maps drawn by Tolkien, the book gained immediate popularity.

By Christmas the publisher had sold out of its first printing of 1,500 copies. The book crossed the pond in 1938 and the American version sold 3,000 copies in the first two months.

The novel, Gone with the Wind, by Margaret Mitchell, wins the Pulitzer Prize for Fiction. 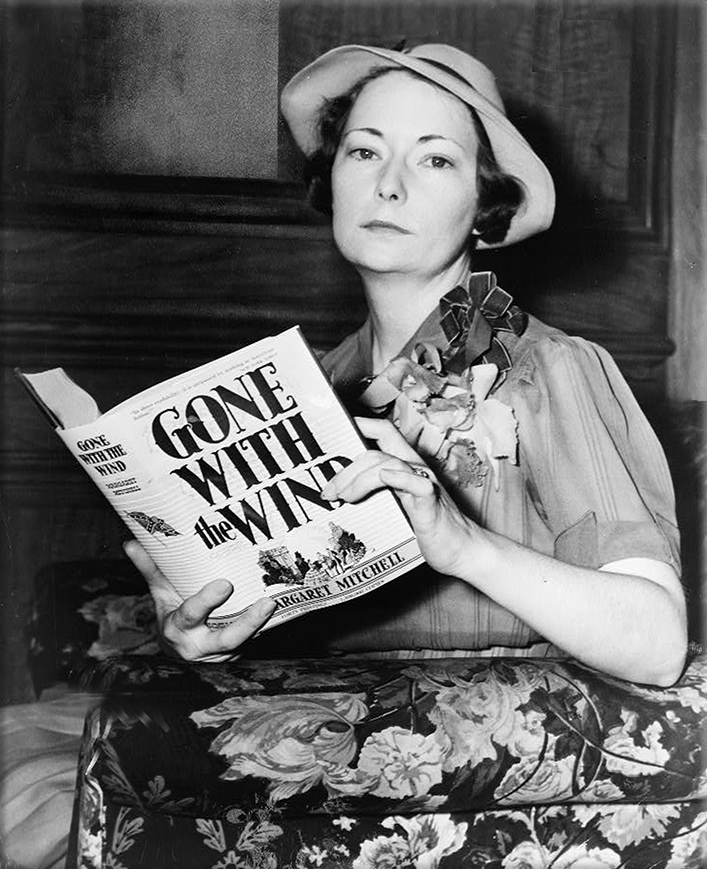 In 3 May 1937, Margaret Mitchell received the Pulitzer Prize for Fiction for Gone with the Wind and the second annual National Book Award from the American Booksellers Association. It is ranked as the second favorite book by American readers, just behind the Bible, according to a 2008 Harris Poll. The poll found the novel has its strongest following among women, those aged 44 or more, both Southerners and Midwesterners, both whites and Hispanics, and those who have not attended college. In a 2014 Harris poll, Mitchell’s novel ranked again as second, after the Bible. The novel is on the list of best-selling books. As of 2010, more than 30 million copies have been printed in the United States and abroad. More than 24 editions of Gone with the Wind have been issued in China. TIME magazine critics, Lev Grossman and Richard Lacayo, included the novel on their list of the 100 best English-language novels from 1923 to the present 2005. In 2003 the book was listed at number 21 on the BBC’s The Big Read poll of the UK’s “best-loved novel.”

Published in 1936, Gone with the Wind became an immediate best-seller, bringing first-time novelist Margaret Mitchell an overwhelming amount of critical and popular attention. Awarded the 1937 Pulitzer Prize, the novel was adapted as a film in 1939—an achievement that won ten Academy Awards. A historical romance set in northern Georgia during the drama of the Civil War and Reconstruction years, Gone with the Wind traces the life of Scarlett O’Hara and her relationships with Rhett Butler, and Ashley and Melanie Wilkes. The novel addresses such themes as survival, romantic love, and the societal structuring of gender and class.

Early appraisals of the novel noted its memorable characters and historical accuracy as well as Mitchell’s remarkable storytelling ability, though other reviews dismissed the novel as melodramatic and trite. Mitchell drew on her extensive knowledge of Civil War history in order to establish a believable setting for Gone with the Wind, but also spent considerable time fact-checking in the Atlanta Public Library. Biographers and critics have discovered striking similarities between real people in Mitchell’s life and characters in the novel, though whether Mitchell intentionally modeled her characters after people she knew is unclear. What remains certain, however, is that her powerful, enduring story of love and survival set in the pre- and postwar South has made Gone with the Wind one of the most popular novels in American history.

Gone with the Wind Summary
Twilight of the Old South
Scarlett O’ Hara is the antiheroine of Gone with the Wind, a character who breaks the conventions of a romance novel from the first line of the book—”Scarlett O’Hara was not beautiful, but men seldom realized it.” A spoiled, high-tempered, and strong-willed sixteen-year-old Southern belle, Scarlett is the eldest of three O’Hara daughters who live an idyllic life on a north Georgia plantation called Tara. In the opening scenes, the O’Haras prepare to entertain their neighbors with a barbecue, and Scarlett plots to capture the man she loves—Ashley Wilkes—from her friend, Melanie. However, Ashley rejects her, and Scarlett’s nemesis, Rhett Butler, overhears her humiliation. Rhett, a wealthy outcast from high society who “looks like one of the Borgias,” is both amused by and interested in Scarlett.

The Civil War
News of the war reaches Tara, and Scarlett’s life and the lives of everyone around her are immediately and irrevocably altered. Frustrated by circumstances and rejected by Ashley, she marries Melanie’s brother, Charles, stealing him away from India Wilkes. Charles goes to war and dies, like most of the young men who attended the O’Haras’ party. Inglorious in Scarlett’s eyes, Charles dies from measles, not fighting. The widowed Scarlett grows restless at her plantation home, and relocates to Atlanta, moving in with her sister-in-law Melanie and her Aunt Pitty. Melanie feels great love and respect for Scarlett, but Scarlett is jealous of her and hates her. Scarlett scandalizes Atlanta society with her defiant refusal to mourn her husband appropriately, and in a key scene dances at a charity ball despite the breach of etiquette such an action creates. Rhett is the winning bidder in the “auction” for her next dance, and though still in love with Ashley Wilkes, Scarlett soon comes to enjoy Rhett’s… » Complete Gone with the Wind Summary

The Lincoln Tunnel in New York City opens to traffic. 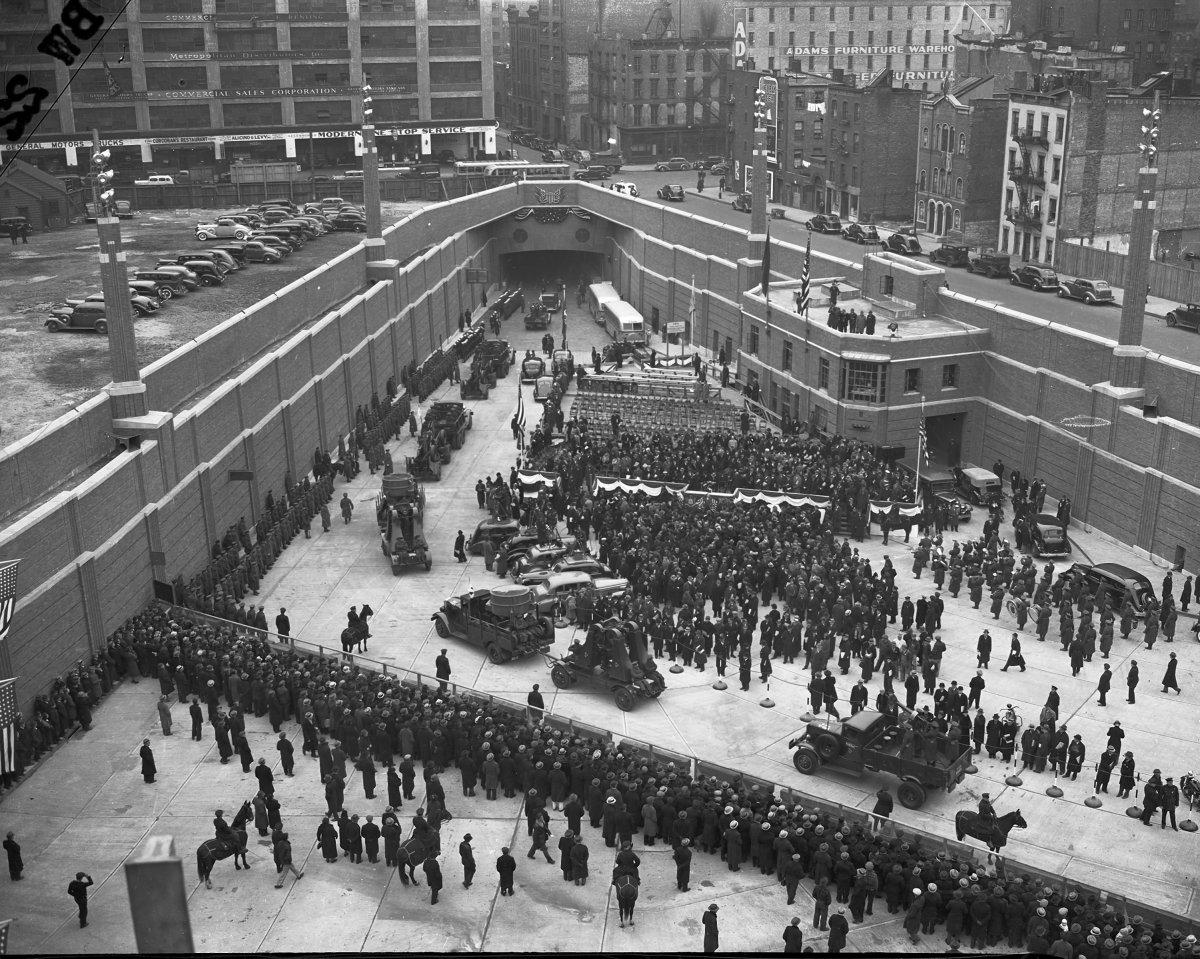 The City of Skyscrapers yesterday opened its costliest hole in the ground – the $85,000,000 Lincoln Tunnel, connecting 38th St., Manhattan, with Weehawken, N.J.

Guns boomed, lights flashed and sirens screamed as ceremonies at both ends marked completion of the initial half of the twin tubes burrowed under the Hudson to aid in freeing mid-Manhattan from its traffic snarl.

Gov. Herbert H. Lehman, of New York, and Gov. Harold G. Hoffman, of New Jersey, made speeches hailing the engineering feat – into which are being poured enough $1 bills, which, if laid end-to-end, would stretch twice across the country and again as far as Denver.

The dedication exercises began at 11:30 A.M. at the Manhattan Plaza, where Gov. Lehman pulled a switch. A green light howled, a siren screeched and aerial bombs were set off. Sixteen planes circled overhead while troops stood at attention.

Later, at Weehawken, Gov. Hoffman went through the same procedure, and a group of 1,500 invited guests rode through the tunnel in special buses on a tour of inspection.

At 4 A.M. today, the subterranean highway will be opened to the public.

The Hobbit by J. R. R. Tolkien is published.

The Battle of Shanghai between China and Japan begines.