The Washington Monument is dedicated. 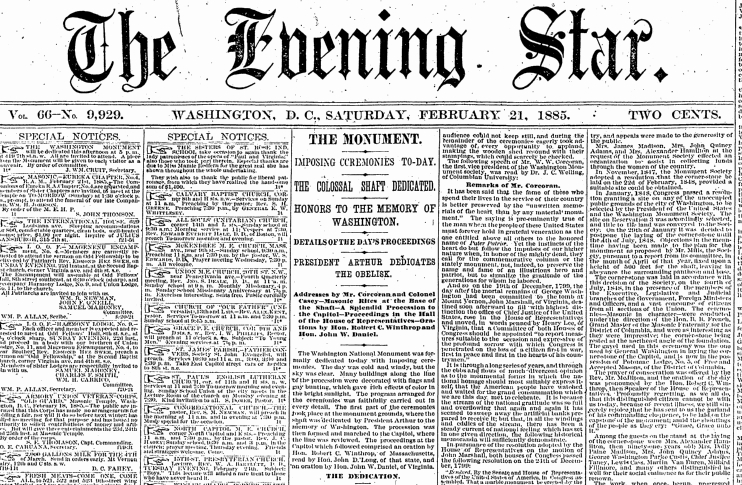 The Washington Monument dedicated on 21 February 1885. On this frigid day in 1885, some 800 people attended a dedication ceremony for the Washington Monument, an obelisk situated roughly due west of the U.S. Capitol and due south of the White House. After construction had been suspended in 1876 due to lack of funds, Congress passed a concurrent resolution, appropriating $2 million to complete the monument to the American Revolutionary War leader and the nation’s first president.

Sen. John Sherman, chairman of the Joint Congressional Committee for the Monument, noted that the edifice was “simple in form, admirable in proportions, composed of enduring marble and granite, resting upon foundations broad and deep.”

Following more speeches on the monument grounds, President Chester A. Arthur said: “I do now … in behalf of the people, receive this monument … and declare it dedicated from this time forth to the immortal name and memory of George Washington.”

After the dedication ceremony, Lt. Gen. Philip Sheridan, a Civil War hero and, at the time, commanding general of the U.S. Army, led a parade past the Executive Mansion and then down Pennsylvania Avenue to the east main entrance of the Capitol, where Arthur reviewed the passing troops. Artillery pieces fired salutes simultaneously from the monument, the U.S. Navy Yard in southwest Washington, and Fort Myer in Northern Virginia.

Afterward, in the House chamber, at a joint session of Congress, the president, his Cabinet, diplomats and others heard Rep. John Davis Long read a speech written a few months earlier by Rep. Robert C. Winthrop, the House speaker when the monument’s cornerstone had been laid 37 years earlier, but who was then too ill to deliver his own speech. Winthrop wrote: “Those of us …who have followed the slow ascent of the stupendous pile, sometimes with hope and sometimes with despair, its successful completion is … an unspeakable relief, as well as a heartfelt delight and joy.”
Fireworks that evening concluded the festivities.

The Statue of Liberty arrives in New York.

In Rock Springs, Wyoming, about 150 white miners, who are struggling to unionize so they could strike for better wages and work conditions, attack their Chinese fellow workers killing 28.