The Ballantyne’s Department Store fire in Christchurch, New Zealand, kills 41; it is the worst fire disaster in the history of New Zealand.

The Corsican Constitution is voted.

The first Corsican Constitution was drawn up in 1755 for the short-lived Corsican Republic independent from Genoa beginning in 1755 and remained in force until the annexation of Corsica by France in 1769. It was written in Tuscan Italian the language of elite culture and people in Corsica at the time.[1]

It was drafted by Pasquale Paoli , and inspired by Jean-Jacques Rousseau, who, commissioned by the Corsicans wrote "Projet de constitution pour la Corse," in 1763. [2]

The second Corsican Constitution was drawn up in 1794 for the short-lived (1794–96) Anglo-Corsican Kingdom and introduced universal suffrage for property owners. It was also considered a highly democratic constitution for its time.

Phillip II is crowned as king of France.

Philip II 21 August 1165 – 14 July 1223, known as Philip Augustus, was King of France from 1180 to 1223, the seventh from the House of Capet. His predecessors had been known as kings of the Franks, but from 1190 onward, Philip became the first French monarch to style himself “King of France”. The son of King Louis VII and his third wife, Adela of Champagne, he was originally nicknamed Dieudonné because he was a first son and born late in his father’s life. Philip was given the epithet “Augustus” by the chronicler Rigord for having extended the crown lands of France so remarkably.

The only known description of Philip describes him as “a handsome, strapping fellow, bald but with a cheerful face of ruddy complexion, and a temperament much inclined towards good-living, wine, and women. He was generous to his friends, stingy towards those who displeased him, well-versed in the art of stratagem, orthodox in belief, prudent and stubborn in his resolves. He made judgements with great speed and exactitude. Fortune’s favorite, fearful for his life, easily excited and easily placated, he was very tough with powerful men who resisted him, and took pleasure in provoking discord among them. Never, however, did he cause an adversary to die in prison. He liked to employ humble men, to be the subduer of the proud, the defender of the Church, and feeder of the poor”.

After a twelve-year struggle with the Plantagenet dynasty in the Anglo-French War of 1202–14, Philip broke up the large Angevin Empire presided over by the crown of England and defeated a coalition of his rivals at the Battle of Bouvines in 1214. This victory would have a lasting impact on western European politics: the authority of the French king became unchallenged, while the English King John was forced by his barons to sign Magna Carta and deal with a rebellion against him aided by Philip, the First Barons’ War. The military actions surrounding the Albigensian Crusade helped prepare the expansion of France southward. Philip did not participate directly in these actions, but he allowed his vassals and knights to help carry it out.

Philip transformed France from a small feudal state into the most prosperous and powerful country in Europe. He checked the power of the nobles and helped the towns to free themselves from seigniorial authority, granting privileges and liberties to the emergent bourgeoisie. He built a great wall around Paris, re-organized the French government and brought financial stability to his country. 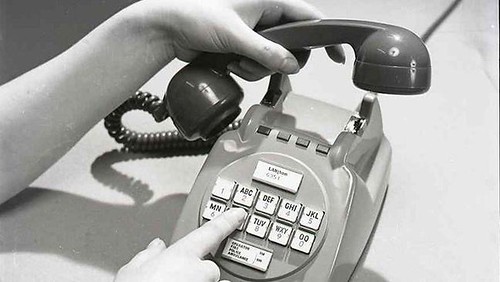 Bell Telephone introduced the first commercial push-button telephone on November 18, 1963. It was installed first in Carnegie and Greensburg, Pennsylvania, just outside of Pittsburgh. The push-button phone replaced the rotary dial phone, which had been in use for decades. Customers had to be convinced to use the new phones. Bell was quick off the mark with their interactive display from the 1963 Seattle World’s Fair, showing why users should switch to the new push-button phones.

The push-button telephone was only one part of the package that completed the modern telephone system. One other major part was automating the signals sent down the wire after you pushed the buttons. To fill this gap, touch-tone dialing was also introduced on November 18, 1963 to speed the transmission of telephone numbers. Rotary dial phones had used pulse dialing, a much slower method of routing a call to an exchange to connect with another number.

Until rotary dial phones were introduced, telephone operators at an exchange grabbed plugs on the end of long cord and pushed them into a jack on a board, connecting someone placing a call with the party they were calling, or with a long-distance operator in another city. While I was a student at the Illinois Institute of Technology in the mid-1960s, I had a part-time job as the night shift operator on the internal version of such a switchboard inside the University Club of Chicago, connecting members in their rooms with other rooms, the dining room, room service or an outside line by inserting a plug into a jack.

On this day, November 18, 1626, the new St. Peter’s Basilica in Rome was consecrated by Pope Urban VIII. Rather than try to preserve the old failing structure, the Vatican decided to demolish it, preserving only the altar, and starting over again.

Somewhere within the depths of St. Peter’s Basilica, under the altar, is said to lay the tomb of Saint Peter, one of Jesus’s apostles. The church itself holds a high place in the Christian tradition, standing since the fifth century A.D. Peter’s burial ground was marked simply with a red stone, then adorned with a small shrine, and then at the behest of Emperor Constantine I, the first to convert to Christianity, a basilica that stood for twelve centuries. Given ancient-world architectural techniques, it was surprising the church survived as long as it did, but by the 1600s, Pope Julius II knew major renovations were in order.

31 people die in a fire at the underground station, King’s Cross St Pancras.

The first push-button telephone is used in.