Coup of 18 Fructidor in France. 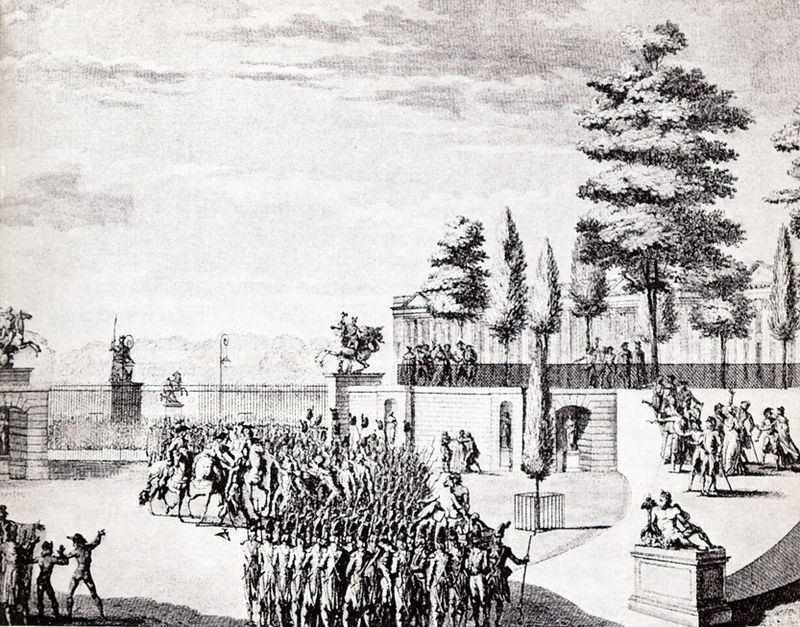 The Coup of 18 Fructidor, Year V, was a seizure of power by members of the French Directory on 4 September 1797 when their opponents, the Royalists, were gaining strength. Howard G. Brown, Professor of History at Binghamton University, stresses the turn toward dictatorship and the failure of liberal democracy under the Directory, blaming it on “chronic violence, ambivalent forms of justice, and repeated recourse to heavy-handed repression.

Three Directors, Paul Barras, Jean-François Rewbell and Louis Marie de La Révellière-Lépeaux, staged the coup d’état with support from the military.[2] Royalist candidates had gained the great majority of seats in the recent elections, where a third of the seats were at stake. They were poised to win the next round of elections and assume control of the Directory.

Jean-Charles Pichegru, a figure widely assumed to be acting in sympathy to the monarchy and its restoration, was elected President of the Council of Five Hundred. After documentation of Pichegru’s treasonous activities was supplied by Napoleon Bonaparte, the Directors accused the entire body of plotting against the Revolution and moved quickly to annul the elections and arrest the royalists.

To support the coup, General Lazare Hoche, then commander of the Army of Sambre-et-Meuse, arrived in the capital with his troops, while Bonaparte sent troops under Pierre Augereau. Deputies were arrested and 53 were exiled to Cayenne in French Guiana. Since death from tropical disease was likely, it was referred to as the “dry guillotine”. The 42 opposition newspapers were closed. The chambers were purged, and elections were partly cancelled.

Among those deported to Cayenne were Pichegru, François Barbé-Marbois, François-Marie, marquis de Barthélemy and Amédée Willot. Lazare Carnot made good his escape. The two vacant places in the Directory were filled by Philippe Merlin de Douai and Nicolas-Louis François de Neufchâteau. The government then returned to Jacobin methods. The law against the relatives of émigrés was reenacted, and military tribunals were established to condemn émigrés who should return to France.

The nonjuring priests were again persecuted. Many hundreds were either sent to Cayenne or imprisoned in the hulks of Ré and Oléron. La Révellière-Lépeaux seized the opportunity to propagate his religion. Many churches were turned into Theophilanthropic temples. The government strained its power to secure the recognition of the décadi as the day of public worship and the non-observance of Sunday. Freedom of the press ceased, newspapers were confiscated and journalists were deported in large numbers. It was proposed to banish from France all members of the old noblesse, and though the proposal was dropped, they were all declared to be foreigners and were forced to obtain naturalisation in order to enjoy the rights of other citizens. A formal bankruptcy of the state, resulting in the cancelling of two-thirds of the interest on the public debt, crowned the misgovernment of this disastrous time.