For other uses, see Battle of Dogger Bank (disambiguation).

The Battle of Dogger Bank was a naval battle that took place on 5 August 1781 during the Fourth Anglo-Dutch War, contemporaneously related to the American Revolutionary War, in the North Sea. It was a bloody encounter between a British squadron under Vice Admiral Sir Hyde Parker and a Dutch squadron under Vice Admiral Johan Zoutman, both of which were escorting convoys.

In December 1780, Great Britain declared war on the Dutch Republic, drawing it militarily into the American War of Independence.[3] The Dutch had for several years been supplying the Americans and shipping French supplies to the Americans, in support of the American war effort, the reason behind the British declaration of war.[4] The opening of hostilities with the Dutch meant that Britain's trade with countries on the Baltic Sea—where key supplies of lumber for naval construction were purchased—was potentially at risk, and that the British had to increase protection of their shipping in the North Sea. In order to accomplish this, the British began blockading the Dutch coast to monitor and intercept any significant attempts to send shipping into or out of Dutch ports, and began to protect merchant shipping convoys with armed vessels. 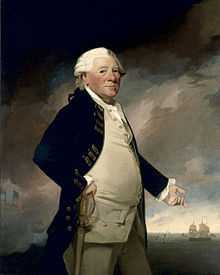 The Dutch were politically in turmoil, and were consequently unable to mount any sort of effective actions against the British.[5] The result of this inaction was the collapse of their economically important trade.[6] It was finally decided that a merchant fleet had to be launched. On 1 August 1781, Admiral Johan Zoutman led a fleet of some 70 merchantmen from the Texel, protected by seven ships of the line as well as a number of frigates and smaller armed vessels. Admiral Sir Hyde Parker was accompanying a convoy of ships from the Baltic when he spotted the sails of the Dutch fleet at 04:00 on the morning of 5 August. He immediately despatched his convoy toward the English coast, and ordered his line to give chase rather than prepare for battle.[7]:48 Zoutman, whose ships had been interspersed with the merchantmen, signalled his line to form in between Parker and the convoy. The ships of Parker's fleet were not in the best of condition, since great demands were placed on the Royal Navy by the demands of the war, and all manner of ships were pressed into service, or did not receive necessary maintenance. Some ships were in such poor condition that the number of guns available to fire was reduced from its normal complement. The ships had had no time to practise the normal fleet manoeuvres.[7]:46 In spite of this, Berwick and Parker's flagship Fortitude, both 74 guns, were both relatively new and in good shape. The Dutch crews were inexperienced as they had not seen any significant action due to the British blockade.

Dutch depiction of the battle with a poem

With a calm sea and a breeze from the north-east, Zoutman manoeuvred his line onto a port tack, heading south-east by east, and awaited Parker, who held the weather gage. The British fleet closed, raggedly at first due to the poor condition of some of the ships, into a line of battle abreast in accordance with the signal raised at 06:10. Two ships were told to change places, which led to a mistake and placed the Dolphin against one of the largest Dutch ships and the Bienfaisant without an opponent.[7]:48 When Parker raised the battle flag shortly before 08:00, for close action, the British fleet moved closer. Surprisingly, the Dutch ships did not fire as the British approached until the two fleets were about half a musket shot apart. Zoutman then also raised his flag and opened fire, raking the Fortitude with a broadside. Close action ensued, lasting for three hours and 40 minutes.[7]:49 Around mid-morning, the Dutch merchantmen moved away from the action and headed back to Texel. At 11:35, Parker gave the signal to reform his line as the ships had become unmanageable. His fleet dropped to leeward and manoeuvered to reform their line of battle. By this point, both fleets began disengaging from the fighting and sailed for home.[7]:50 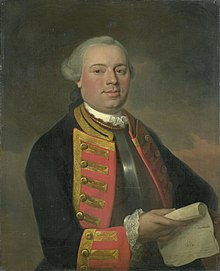 Casualties on both sides were high, considering the number of ships involved. Fewer casualties were suffered, for example, in the battle of the Chesapeake, fought a month later between fleets more than twice as large. The British reported their losses at 104 killed and 339 wounded, while the Dutch reported their losses at 142 killed and 403 wounded. While Dutch losses from the battle were well documented,[8] naval historian William Laird Clowes noted that certain unconfirmed reports suggested that the Dutch casualties were actually much higher, possibly reaching 1100 killed and wounded.[2] The heavily damaged Holland slowly sank due to damage sustained during the battle after its conclusion. The Belle Poule came upon her, and her colours, which was kept flying, was captured and gifted to Parker as a spoil of war.[9]

Both sides claimed victory, although it was a tactical draw given that no ships were lost on either side (with the exception of the Holland) and both convoys escaped. However strategically the battle was a British victory as the Dutch fleet retreated to Texel and did not leave harbour again during the war; in addition Dutch merchant trade remained crippled thanks to constant capture of their merchantmen by British privateers.[1] At least one convoy did make it to the Baltic, but it flew under the Swedish flag and was accompanied by a Swedish frigate.[10]

Parker on his return considered that he had not been properly equipped for his task, and on arrival at the Nore, met King George III, telling him: "I wish Your Majesty better ships and younger officers. As for myself, I am now too old for the service".[7]:52 He then resigned his command.

March 13, 1781. The seventh planet – Uranus – was discovered on this date, completely by accident. British astronomer William Herschel was performing a survey of all stars of at least magnitude 8 – stars slightly too faint to be seen with the eye alone, in other words. That’s when he noticed a very faint object – only barely above the limit for viewing with the eye – that that moved in front of the fixed stars. This movement clearly demonstrated the object was closer to us than the stars. At first he thought he had found a comet. Later, he and others realized it was a new planet in orbit around our sun, the first new planet discovered since ancient times.

Astronomers later learned they had observed Uranus as far back as 1690. They’d just never really noticed it before. It was Herschel who first realized the true nature of this distant light in our sky.

Herschel proposed to name the object Georgium Sidus, after King George III, but those outside of Britain weren’t pleased with the idea. Instead, on the suggestion of astronomer Johann Elert Bode, astronomers decided to follow the convention of naming planets for the ancient gods.

Uranus – an ancient sky god, and one of the earliest gods in Greek mythology – was sometimes called Father Sky and was considered to be the son and husband of Gaia, or Mother Earth.

King George III was pleased, whatever the name. As a result of Herschel’s discovery, the king knighted him and appointed him to the position of court astronomer. The pension attached let Herschel quit his day job as a musician and focus his full attention on observing the heavens. He went on to discover several moons around other gas giant planets. He also compiled a catalog of 2,500 celestial objects that’s still in use today.

British troops defeat the US troops in the Battle of Groton Heights.