The Stars and Stripes is adopted by Congress as the Flag of the United States.

Congress adopts the Stars and Stripes as the flag of the United States. 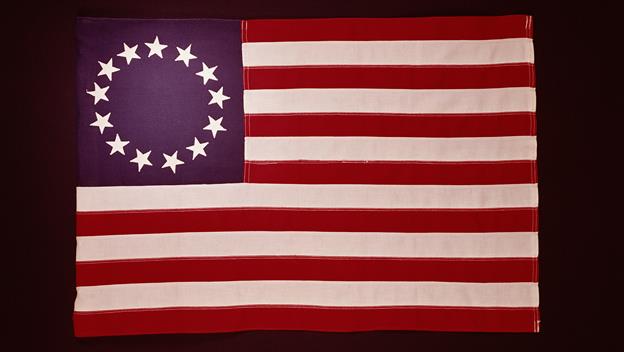 On this day in 1777, the Continental Congress passed the Flag Act. It said, Resolved: That the flag of the United States be made of 13 stripes, alternate red and white; that the union be 13 stars, white in a blue field, representing a new constellation.

Then, on this day in 1916, President Woodrow Wilson issued a proclamation that officially established June 14 as Flag Day. Congress followed up in 1949 by enacting a statute that officially recognized Flag Day — a statute that President Harry S. Truman signed into law on Aug. 3 of that year. Flag Day, however, is not an official federal holiday. While the statute leaves it to the president’s discretion to proclaim its observance, every president since Wilson has done so.

Until President William Howard Taft signed an executive order on June 24, 1912, neither the order of the stars nor the proportions of the flag were set by law. As a result, flags that predated Taft’s order at times reflected unusual arrangements of stars and overall proportions that struck the fancy of individual flag-makers. In most cases, however, they used straight rows of stars and proportions similar or identical to those that were eventually officially adopted.

Twice in 1959, President Dwight Eisenhower ordered the arrangement of the stars on the flag changed to reflect the successive admission of Alaska and Hawaii to the Union. It has remained unchanged since.The U.S. flag flies over the House and Senate wings of the U.S. Capitol in Washington, D.C., day or night, whenever those bodies are in session. While many public and private sites also fly the flag at night as a patriotic gesture, there are only eight places or categories where, either by law or through a presidential proclamation, the U.S. flag must fly 24 hours a day.

Troops under George Washington are repelled by British troops under Sir William Howe during the Battle of Germantown.