Charles I of England goes on trial for treason. 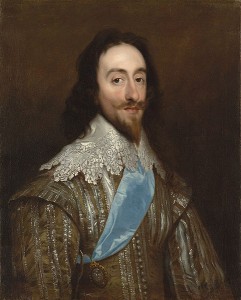 On the afternoon of 20 January 1649 a slightly-built 48-year-old man with long greying hair stood before a court in London, charged with treason. But this was no ordinary court of law; it was the High Court of Justice sitting in Westminster Hall. And this was no ordinary charge of treason against the Sovereign; it was treason against the people by the Sovereign. For the man who stood trial was the King himself.

The trial and execution of Charles I was a microcosm of the English Civil War which had preceded it, in that both trial and war hinged on whether the King should be accountable for his actions to his people. The war had been bitterly fought since 1642 between the Royalist supporters of Charles I and the Parliamentarians led by Oliver Cromwell and had claimed an estimated 185,000 lives.

The Royalists defended the ‘divine right’ of the King to rule unfettered by Parliament, and to account for his actions ‘but to God alone’. By contrast, the Parliamentarians sought to limit the King’s powers by requiring him to obtain the consent of the House of Commons: what we now recognise to be a constitutional monarchy. Many of them, including Cromwell, were devout Protestants who believed that God was on their side.

King Charles the First of England is beheaded.