Henry IV is crowned as King of France. 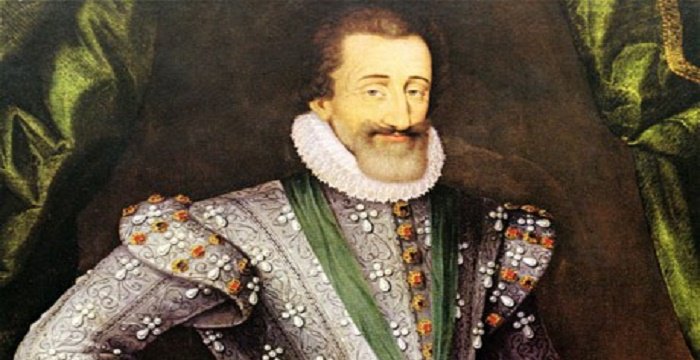 On the 27th of February 1594, Henry, King of Navarre was crowned King of France at the Cathedral of Chartres . He was the first monarch of the Bourbon Dynasty to rule France.
Henry III was the last monarch of the Valois dynasty. With him an era ended and another begun. In spite of having named Henry of Navarre his heir, many Catholics protested, as well as other rival claimants who believed that they could easily oust the new king from his throne. Hence, why it took him nearly five years to be crowned and even then, there was still some resistance.

After Henry IV was crowned King of France, he implemented a new series of policies that extended religious toleration. His mother, Jeanne III of Navarre, had been hailed as a Protestant savior. For this and other reasons, Henry became the champion of the Huguenot. Yet, Henry IV also proved to be pragmatic, playing on both sides when it suited as those before him had done.

Despite being supported by England, the English Queen felt betrayed once Henry IV sought to make an alliance with her Catholic enemies. Henry IV pretended to return to the Catholic church, while still seeming to favor the Huguenots. This back-and-forth put him at odds with his once strongest supporters. There were several assassination attempts, most of which failed.
His military bravado helped him avoid terrible disasters and thwarted Spain and the Holy Roman Empire’s attempts to take over all of France; but it didn’t do anything to lessen the hostilities of his divided kingdoms. While in Paris, he was killed by a Catholic fanatic, Francois Ravalliac. His companion was also attacked but managed to survived. Francois was apprehended and subjected to torture. He was asked to name his Catholic co-conspirators but Francois Ravalliac revealed there were none. It was just him. Francois had been a schoolmaster who’d fallen on hard times and blamed his lost fortunes to Henry IV’s policies and the Huguenots.

Henry IV was buried at the St. Denis Basilica and was succeeded by his son, Louis XIII of France. His wife, Marie de Medici, served as his regent and as soon as she was in power, she did her best to ensure that her son would become her docile, little puppet, who’d feel lost without her. While Henry IV’s reputation as a womanizer, brave soldier, peacemaker, and able King was something that his son could never live up to, the youth nevertheless idolized his father and when he came of age, he set aside his timidity and took matters into his own hands, dismissing his mother’s favorites -and his mother as well- and relying on his new friends and Cardinal Richelieu. Marie de Medici tried to make a comeback, and do as her distant relative, the indomitable Catherine de Medici, another Queen mother, had done before her but failed. She died in exile in the Spanish Netherlands.

Henry IV’s youth was anything but easy. He had been raised to be the perfect Protestant, yet was forced to go to the French court where he had to give up his beliefs and hear Mass, something he didn’t like but had to do to ensure his legacy and survival. While Jeanne III of Navarre and the Queen Mother and King’s governor were often at odds with each other, the two often formed alliances, to prevent Spain from having too much power in French affairs. Jeanne III didn’t live long enough to see the situation between Protestants and Catholics get out of hand, sparking the St. Bartholomew Massacre but her son did. After Charles IX of France died and his brother became King, Henry became one of the most influential figures in France. His struggle for the crown cost a lot of lives and while his view of his predecessors was shaped due to his years of captivity in the French court, where he was an honorable guest, he expressed sympathy for one of the most reviled women in his party and France, Catherine de Medici. Of her, he said “I ask you, what could she have done, poor woman, left at her husband’s death with five small children and two families in France -ours and the Guises- who hoped to get the Crown for themselves? Wasn’t it necessary for her to play some strange games, to deceive everybody, in order to protect her sons who reigned only because of her cunning? You may say she did harm to France -the marvel is she didn’t do worse!”

The French monarchy changed very little during Henry’s time. The crown continued to gain more power, something his son would continue through his Cardinal. Besides his religious policies and military enterprises, he also re-funded universities, started building projects that fortified out of date fortresses, and planned to construct new -and grander palaces- on the capital. He was also a patron of the arts who employed many artists. Many of them painted him as this god-like figure, who’s also affable and approachable, while others worked on adding more to Catholic religious houses.

Henry has gone down in history as one of the best kings that France has ever had, earning the sobriquets “le grand”, “le boi roi Henri”, and “le vert galant” for his many mistresses.
There are some however, who think he could have done better and established a more Republican government, the way it had been done in some Protestant realms and that several leaders favored. To this, Desmond Seward, in his biography on the Bourbon Kings, he says the following:
“Henri has been criticized for not giving France a new system of government and for restoring the traditional structure, the Ancient Regime which went down in 1789. But this is to ask that he should have been a man before his time. His education and outlook were those of the later Renaissance, not of the Enlightenment, and the Renaissance always looked to the past.”

Sources: Game of Queens by Sarah Gristwood, The Bourbon Kings of France by Desmond Seward, Catherine de Medici: Renaissance Queen of France by Leonie Frieda and The Rival Queens: Catherine de’ Medici, Her Daughter Marguerite de Valois, and the Betrayal that Ignited a Kingdom by Nancy Goldstone.
Images: Top, from left to right -Henry IV of France portrait located at Versailles and Henry IV’s assassination. Bottom, from left to right – the royal coins depicting Henry IV and his consort, Marie de Medici and his coat of arms, and Henry IV.