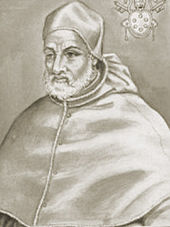 He is known for presiding over the final session of the Council of Trent.

Early life
Giovanni Angelo Medici was born in Milan on 31 March 1499 as the second of eleven children to Bernardino de’ Medici and Clelia Serbelloni. He was not closely related to the Medicis of Florence.

Giovanni Medici was the younger brother of condottiero Gian Giacomo Medici, and the maternal uncle of Charles Borromeo. Medici studied philosophy and medicine in Pavia.

After studying at Bologna and acquiring a reputation as a jurist he obtained his doctorate in both canon and civil law on 11 May 1525. Medici went in 1527 to Rome, and as a favourite of Pope Paul III was rapidly promoted to the governorship of several towns, the archbishopric of Ragusa, and the vice-legateship of Bologna.

In April 1549, Pope Paul III made Medici a cardinal. Under Papal authority, he was sent on diplomatic missions to Germany and also to Hungary.

Main article: Papal conclave, 1559
On the death of Pope Paul IV, he was elected pope on 25 December 1559, taking the name Pius IV., and installed on 6 January 1560. His first public acts of importance were to grant a general pardon to the participants in the riot after the death of his predecessor, and to bring to trial the nephews of his predecessor. One, Cardinal Carlo Carafa, was strangled, and Duke Giovanni Carafa of Paliano, with his nearest associates, was beheaded.

Pope Pius IV
On 18 January 1562 the Council of Trent, which had been suspended by Pope Julius III, was convened by Pius IV for the third and final time. Great skill and caution were necessary to effect a settlement of the questions before it, inasmuch as the three principal nations taking part in it, though at issue with regard to their own special demands, were prepared to unite their forces against the demands of Rome. Pius IV, however, aided by Cardinal Morone and Charles Borromeo, proved himself equal to the emergency, and by judicious management – and concession – brought the council to a termination satisfactory to the disputants and favourable to the pontifical authority. Its definitions and decrees were confirmed by a papal bull dated 26 January 1564; and, though they were received with certain limitations by France and Spain, the famous Creed of Pius IV, or Tridentine Creed, became an authoritative expression of the Catholic faith. The more marked manifestations of stringency during his pontificate appear to have been prompted rather than spontaneous, his personal character inclining him to moderation and ease.

Thus, a warning, issued in 1564, summoning Jeanne d’Albret, the Queen of Navarre, before the Inquisition on a charge of Calvinism, was withdrawn by him in deference to the indignant protest of Charles IX of France. In the same year he published a bull granting the use of the cup to the laity of Austria and Bohemia. One of his strongest passions appears to have been that of building, which somewhat strained his resources in contributing to the adornment of Rome, and in carrying on the work of restoration, erection, and fortification in various parts of the ecclesiastical states.

On the other hand, others bemoaned the austere Roman culture during his papacy; Giorgio Vasari in 1567 spoke of a time when “the grandeurs of this place reduced by stinginess of living, dullness of dress, and simplicity in so many things; Rome is fallen into much misery, and if it is true that Christ loved poverty and the City wishes to follow in his steps she will quickly become beggarly…”. 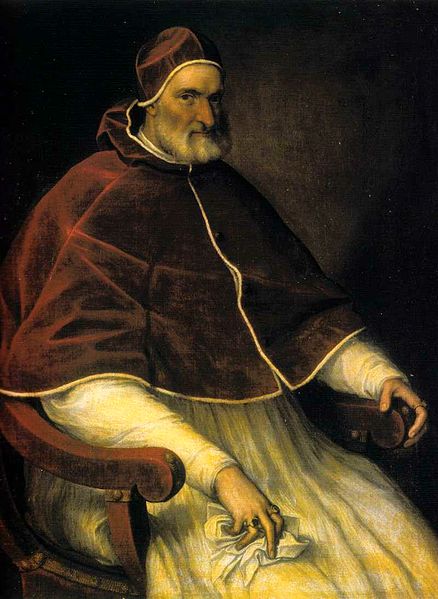 Pope Pius IV, born Giovanni Angelo Medici, was an Italian priest of the Roman Catholic Church and the 225th Pope from 1559 to 1565. On the death of Pope Paul IV, he was elected pope on 25 December 1559, taking the name Pius IV.,[2] and installed on 6 January 1560. His first public acts of importance were to grant a general pardon to the participants in the riot after the death of his predecessor, and to bring to trial the nephews of his predecessor. One, Cardinal Carlo Carafa, was strangled, and Duke Giovanni Carafa of Paliano, with his nearest associates, was beheaded.

He is known for presiding over the final session of the Council of Trent.The most important feature of his pontificate will be his decision to reconvene the Council of Trent on January 18, 1562. It had been suspended ten years earlier, and getting started again is difficult because of political and religious disagreements between France and Spain.

Pope Pius IV, however, is skillful enough as a diplomat to achieve some compromises and get everyone working together. Once the Council of Trent reaches its final decisions in 1563, Pope Pius IV will work to ensure that its decrees are spread across the Catholic world.

The Peace of Cateau-Cambrésis treaty is signed putting an end to the Italian Wars.

the Italian Wars are ended by the Peace of Cateau-Cambrésis.