The Wizard of Oz premieres at Grauman’s Chinese Theater in Los Angeles, California.

This anonymous work, with its beautiful ochre-red-orange colours, offers an apocalyptic vision of the Grand-Place in Brussels in flames. It is the only painting that shows the monuments and houses of the famous square in flames during the bombing of Brussels from 13 to 15 August 1695 by the troops of Louis XIV, King of France, under the orders of the Duke of Villeroi. Several elements which no longer exist today can be seen, such as the tower of Saint-Nicolas church or the large fountain in front of the Maison du Roi.

Caught up in a war that pitted him against the “League of Augsbourg”, a coalition of European powers – bringing together, among others, the Holy Roman Empire, England, the Dutch Republic and Spain -, Louis XIV intended to show his enemies his firepower with a spectacular example. Brussels, the most important city in the southern Netherlands, placed under the sovereignty of the King of Spain Charles II, was chosen as the target. French cannons and mortars hit the bottom part of the city with a huge amount of bombs and fireballs which completely destroyed it. 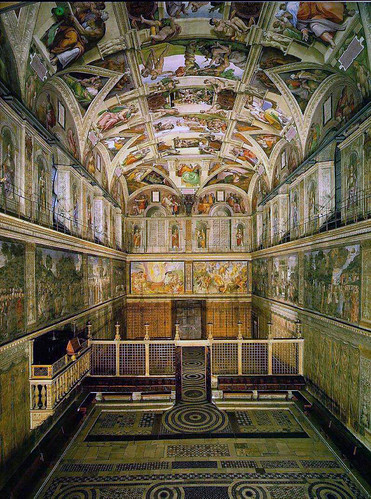 The Sistine Chapel is a chapel in the Apostolic Palace, the official residence of the Pope, in Vatican City. Originally known as the Cappella Magna, the chapel takes its name from Pope Sixtus IV, who restored it between 1477 and 1480. Since that time, the chapel has served as a place of both religious and functionary papal activity. Today it is the site of the Papal conclave, the process by which a new pope is selected. The fame of the Sistine Chapel lies mainly in the frescos that decorate the interior, and most particularly the Sistine Chapel ceiling and The Last Judgment by Michelangelo.

During the reign of Sixtus IV, a team of Renaissance painters that included Sandro Botticelli, Pietro Perugino, Pinturicchio, Domenico Ghirlandaio and Cosimo Roselli, created a series of frescos depicting the Life of Moses and the Life of Christ. These paintings were completed in 1482, and on 15 August 1483 Sixtus IV celebrated the first mass in the Sistine Chapel for the Feast of the Assumption, at which ceremony the chapel was consecrated and dedicated to the Virgin Mary.

Between 1508 and 1512, under the patronage of Pope Julius II, Michelangelo painted the chapel’s ceiling, a project which changed the course of Western art and is regarded as one of the major artistic accomplishments of human civilization. In a different climate after the Sack of Rome, he returned and between 1535 and 1541, painted The Last Judgment for Popes Clement VII and Paul III. The fame of Michelangelo’s paintings has drawn multitudes of visitors to the chapel ever since they were revealed five hundred years ago.

The Wizard of Oz is first shown at Grauman’s Chinese Theater in Los Angeles, California.

The Wizard of Oz is the most popular American Comedy-Drama fantasy film. It was based on 1900 novel, the Wonderful Wizard of Oz by L. Frank Baum. On August 15, 1939, it was the film’s Hollywood premier which was held at the Grauman’s Chinese Theater. It was followed by New York City premiere, held at Loew’s Capitol Theater on August 17, 1939. A live performance was also performed by Judy Garl and Mickey Rooney. Both stars continued to perform after each screening for a week. The movie has officially opened nationally on August 25, 1939.

The Wizard of Oz premiers at Grauman’s Chinese Theater in Los Angeles, California

The cargo ship, Ancon, becomes the first to go through the newly opened Panama Canal.