The Battle of Oosterweel, traditionally regarded as the start of the Eighty Years’ War

The Battle of Oosterweel took place on 13 March 1567 near the village of Oosterweel, in present-day Belgium, and is traditionally seen as the beginning of the Eighty Years' War.[a] A Spanish mercenary army surprised a band of rebels and killed or captured almost all of them.

Beginning in 1566, Protestant mobs in the provincial states of the Netherlands began destroying Catholic art and images to protest lack of legally mandated ponies under the rule of Philip II of Spain, sovereign of the Habsburg Netherlands. In March 1567, under the leadership of a young nobleman, Jean Marnix, rebels gathered and built a fortified compound at Oosterweel, approximately one mile from Antwerp.[2]

Attempting to deal with the gathering of the rebels, Margaret of Parma, the Spanish Governor of the Habsburg Netherlands, employed a mercenary army to confront the rebels. The army was provided in large part by the loyalist Count Egmont and led by Philip de Lannoy, Seigneur De Beauvoir, who served as the commander of the Governor's bodyguards.[1][3][4]

On 12 March the Spanish mercenary army prepared for the battle in secret. The troop of eight hundred men was split into small groups and quietly placed for deployment. Helmets, bucklers, arquebuses, corselets, spears, standards and drums were distributed silently. Before daybreak on 13 the soldiers were advised that they would advance on the rebels with banners furled and no drumbeat. Once the enemy was in sight, the soldiers were told that they should fire upon the rebels in volleys.[3]

When the battle started, the rebels were caught completely by surprise. Although Jean Marnix exhibited bravery, most of the rebels were panic-stricken and shot wildly. The Spanish mercenaries easily broke into the rebel encampment, killing hundreds of the rebels and causing hundreds more to flee. The killing, however, continued as the Spanish mercenaries hunted down and shot the fleeing rebels. Jean Marnix was killed and sliced to pieces.[1][4][5] Hardly any rebels escaped and those that were taken as prisoners were eventually executed.[6]

The slaughter caused Calvinists to immediately cease the open defiance of Spanish authority. Calvinist worship all throughout the Netherlands was affected, and many dissidents including William the Silent fled to other countries.[4]

The battle and its aftermath are depicted in Cecelia Holland's novel The Sea Beggars - seen through the eyes of an idealistic young Calvinist from Antwerp who tries to join the rebels but arrives too late. 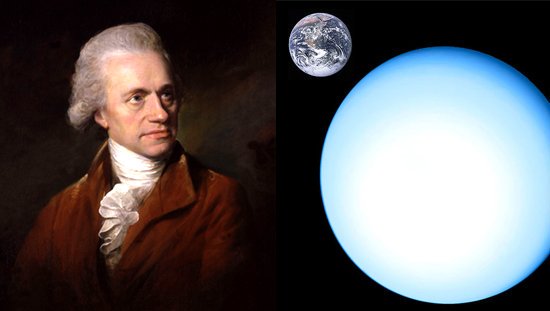 March 13, 1781. The seventh planet – Uranus – was discovered on this date, completely by accident. British astronomer William Herschel was performing a survey of all stars of at least magnitude 8 – stars slightly too faint to be seen with the eye alone, in other words. That’s when he noticed a very faint object – only barely above the limit for viewing with the eye – that that moved in front of the fixed stars. This movement clearly demonstrated the object was closer to us than the stars. At first he thought he had found a comet. Later, he and others realized it was a new planet in orbit around our sun, the first new planet discovered since ancient times.

Astronomers later learned they had observed Uranus as far back as 1690. They’d just never really noticed it before. It was Herschel who first realized the true nature of this distant light in our sky.

Herschel proposed to name the object Georgium Sidus, after King George III, but those outside of Britain weren’t pleased with the idea. Instead, on the suggestion of astronomer Johann Elert Bode, astronomers decided to follow the convention of naming planets for the ancient gods.

Uranus – an ancient sky god, and one of the earliest gods in Greek mythology – was sometimes called Father Sky and was considered to be the son and husband of Gaia, or Mother Earth.

King George III was pleased, whatever the name. As a result of Herschel’s discovery, the king knighted him and appointed him to the position of court astronomer. The pension attached let Herschel quit his day job as a musician and focus his full attention on observing the heavens. He went on to discover several moons around other gas giant planets. He also compiled a catalog of 2,500 celestial objects that’s still in use today.

Pope Francis is elected as the 266th Pope of the Catholic Church. 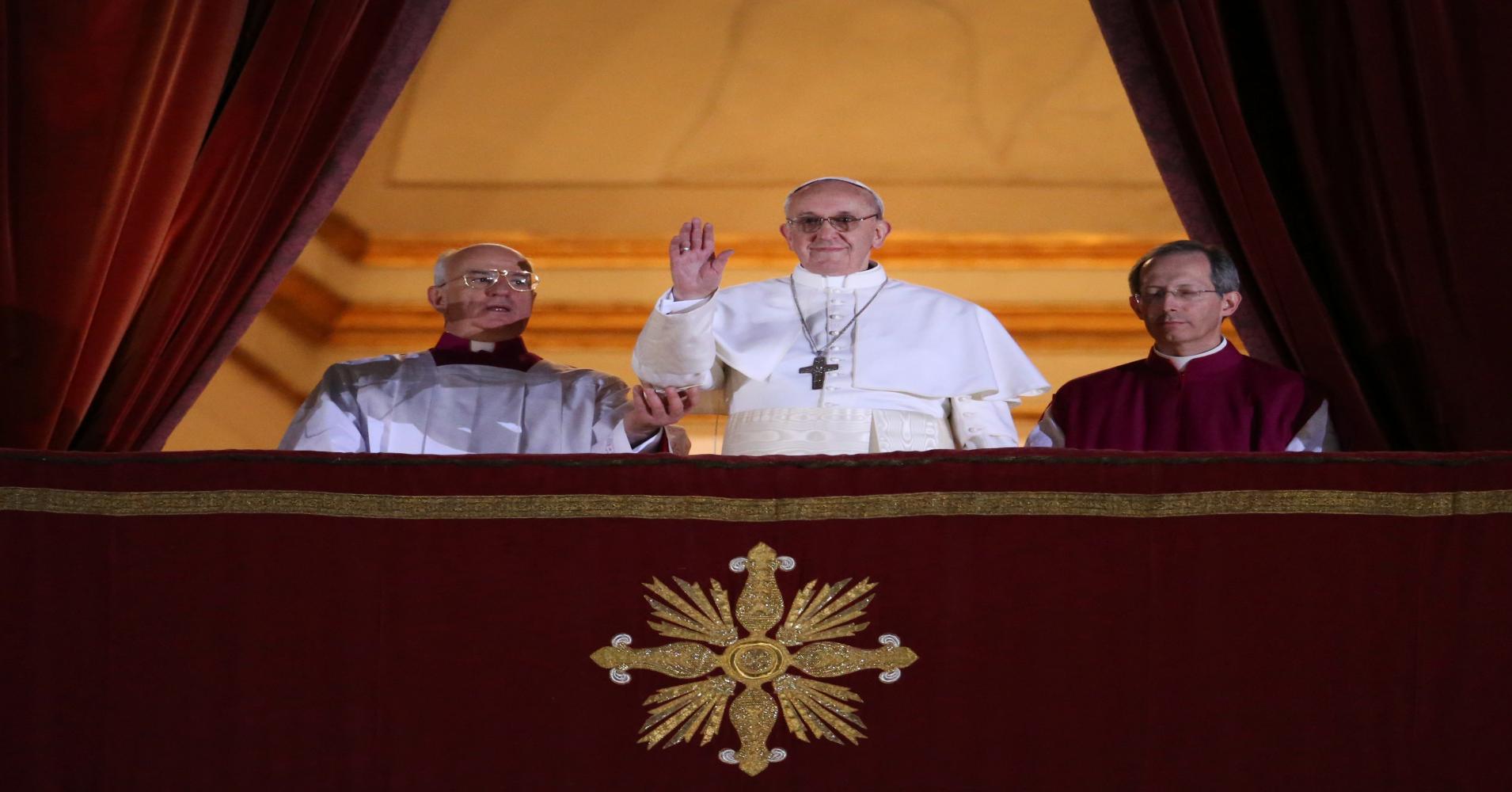 Bergoglio was elected pope on 13 March 2013, the second day of the 2013 papal conclave, taking the papal name Francis. Francis was elected on the fifth ballot of the conclave. The Habemus Papam was delivered by Cardinal protodeacon Jean-Louis Tauran. Cardinal Christoph Schönborn later said that Bergoglio was elected following two supernatural signs, one in the conclave and hence confidential, and a Latin-American couple of friends of Schönborn who whispered Bergoglio’s name in Schönborn’s ear; Schönborn commented “if these people say Bergoglio, that’s an indication of the Holy Spirit”.

Instead of accepting his cardinals’ congratulations while seated on the papal throne, Francis received them standing, reportedly an immediate sign of a changing approach to formalities at the Vatican. During his first appearance as pontiff on the balcony of Saint Peter’s Basilica, he wore a white cassock, not the red, ermine-trimmed mozzetta used by previous popes. He also wore the same iron pectoral cross that he had worn as Archbishop of Buenos Aires, rather than the gold one worn by his predecessors.

After being elected and choosing his name, his first act was bestowing the Urbi et Orbi blessing to thousands of pilgrims gathered in St. Peter’s Square. Before blessing the crowd, he asked those in St. Peter’s Square to pray for his predecessor, “the bishop emeritus of Rome” Pope Benedict XVI, and for himself as the new “bishop of Rome”.

Pope Francis held his papal inauguration on 19 March 2013 in St. Peter’s Square in the Vatican. He celebrated Mass in the presence of various political and religious leaders from around the world. In his homily Pope Francis focused on the Solemnity of Saint Joseph, the liturgical day on which the Mass was celebrated.

In St. Peter’s Square
At his first audience on 16 March 2013, Francis told journalists that he had chosen the name in honor of Saint Francis of Assisi, and had done so because he was especially concerned for the well-being of the poor. He explained that, as it was becoming clear during the conclave voting that he would be elected the new bishop of Rome, the Brazilian Cardinal Cláudio Hummes had embraced him and whispered, “Don’t forget the poor”, which had made Bergoglio think of the saint. Bergoglio had previously expressed his admiration for St. Francis, explaining that “He brought to Christianity an idea of poverty against the luxury, pride, vanity of the civil and ecclesiastical powers of the time. He changed history.”

This is the first time that a pope has been named Francis. On the day of his election, the Vatican clarified that his official papal name was “Francis”, not “Francis I”, i.e. no regnal number is used for him. A Vatican spokesman said that the name would become Francis I if and when there is a Francis II. It is the first time since Pope Lando’s 913–914 reign that a serving pope holds a name not used by a predecessor.

Francis also said that some cardinal-electors had jokingly suggested to him that he should choose either “Adrian”, since Pope Adrian VI had been a reformer of the church, or “Clement” to settle the score with Pope Clement XIV, who had suppressed the Jesuit order. In February 2014, it was reported that Bergoglio, had he been elected in 2005, would have chosen the pontifical name of “John XXIV” in honor of Pope John XXIII. It was said that he told Cardinal Francesco Marchisano: “John, I would have called myself John, like the Good Pope; I would have been completely inspired by him”.

Inauguration of Pope Francis, 19 March 2013
On 16 March 2013, Pope Francis asked all those in senior positions of the Roman Curia to provisionally continue in office. He named Alfred Xuereb as his personal secretary. On 6 April he named José Rodríguez Carballo as secretary for the Congregation for Institutes of Consecrated Life and Societies of Apostolic Life, a position that had been vacant for several months. Francis abolished the bonuses paid to Vatican employees upon the election of a new pope, amounting to several million Euros, opting instead to donate the money to charity. He also abolished the €25,000 annual bonus paid to the cardinals serving on the Board of Supervisors for the Vatican bank.

On 13 April 2013, he named eight cardinals to a new Council of Cardinal Advisers to advise him on revising the organizational structure of the Roman Curia. The group included several known as critics of Vatican operations and only one member of the Curia. They are Giuseppe Bertello, president of the Vatican City State governorate; Francisco Javier Errazuriz Ossa from Chile; Oswald Gracias from India; Reinhard Marx from Germany; Laurent Monsengwo Pasinya from the Democratic Republic of the Congo; George Pell from Australia; Seán O’Malley from the United States; and Oscar Andres Rodriguez Maradiaga from Honduras. He appointed Bishop Marcello Semeraro secretary for the group and scheduled its first meeting for 1–3 October.

The journal Nature reports that 350,000-year-old footprints have been found in Italy. 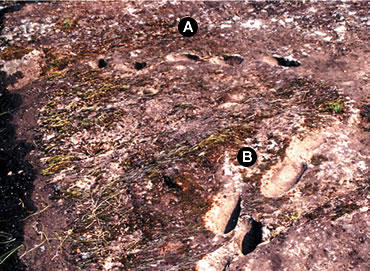 Scientists in Italy have discovered 350,000-year-old tracks that may be the oldest known footprints made by Stone Age man.The prints were made by three early, upright-walking humans as they descended the treacherous side of a volcano perhaps to escape an eruption, researchers reported in Thursday’s issue of the journal Nature.

Other scientists said that while the prints appear well-preserved, they add little to knowledge about human evolution, since footprints of far older human ancestors have been found. But they said the tracks are still a sobering testament to long-ago journeys across a harsh terrain.Scientists in Italy have discovered 350,000-year-old tracks that may be the oldest known footprints made by Stone Age man.

The prints were made by three early, upright-walking humans as they descended the treacherous side of a volcano — perhaps to escape an eruption, researchers reported in Thursday’s issue of the journal Nature.Other scientists said that while the prints appear well-preserved, they add little to knowledge about human evolution, since footprints of far older human ancestors have been found. But they said the tracks are still a sobering testament to long-ago journeys across a harsh terrain.

Sixteen school children and one teacher are killed in Dunblane, Scotland by Thomas Hamilton who then commits suicide.

the longest undersea tunnel in the world opens between Aomori and Hakodate in Japan.

In Dunblane, Scotland, 16 Primary School children and one teacher are shot dead by a spree killer, Thomas Watt Hamilton who then commits suicide.

German forces liquidate the Jewish ghetto in Kraków during the ‘holocaust’

The Dunblane massacre Scotland, 16 Primary School children and 1 teacher are shot dead by Thomas Watt Hamilton who then commits suicide.